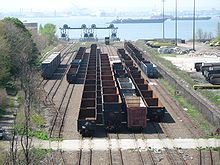 New York New Jersey Rail, LLC (reporting mark NYNJ) is a switching and terminal railroad[1] that operates the only car float operation across New York Harbor between Jersey City, New Jersey and Brooklyn, New York. Since mid-November 2008, it has been owned by the Port Authority of New York and New Jersey, which acquired it for about $16 million as a step in a process that might see a Cross-Harbor Rail Tunnel completed. Since freight trains are not allowed in Amtrak's North River Tunnels, and the Poughkeepsie Bridge was closed in 1974, the ferry is the only freight crossing of the Hudson River south of the Alfred H. Smith Memorial Bridge, 140 miles (230 km) to the north of New York City (see Selkirk hurdle).[2] It is the last remaining car float operation in the Port of New York and New Jersey.

The 2.5 mile barge trip across the harbor takes approximately 45 minutes. The equivalent truck trip would be 35 to 50 miles.[3]

In 2002, New York Cross Harbor Railroad revenues from railroad operations were $ 1,685,899. It had 48 active customers, with shipments of cocoa from docks in Brooklyn as its largest line of business. It also ran a trucking service and offered shipside and dockside service for receipt or delivery of various types of cargo, such as oversized steel beams.[3]

The Port Authority has been working with government agencies in New York and New Jersey to bring the NYNJ to a state of good repair. This includes emergency work to stabilize the transfer bridge structure in Greenville, repairs to the float bridge and track infrastructure in Brooklyn, and procurement of ultra-low emissions locomotives and a new 30-car rail barge.[4]

In May 2010, the Port Authority announced that it would purchase the Greenville Yard and build a new barge-to-rail facility there, as well as improving the existing rail car float system. The barge-to-rail facility is expected to handle an estimated 60,000 to 90,000 containers of solid waste per year from New York City, eliminating up to 360,000 trash truck trips a year. The authority's board authorized $118.1 million for the overall project.[5]

In November 2011, the Port Authority hired HDR, Inc. of Omaha, Nebraska as prime design consultant on a project to rehabilitate the Greenville Yard. The work will include rehabilitating the railyard and waterfront structures, including a rail barge and transfer bridge, demolishing two other bridges, designing a new barge and two new bridges, and adding 10,000 feet of track. The project is expected to take 5 years.[6][7]