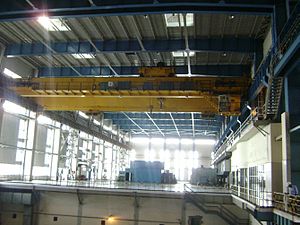 NTPC Ltd., Ramagundam has two TG Halls one for STAGE - I and the other common for STAGE-II and STAGE-III. These TG halls are equipped with heavy overhead cranes that assist in transportation of material to, from and within the TG hall. These cranes find their use greatly during overhauls.

The whole plant is divided into 3 stages, each stage being planned at one time.

This stage consists of three units(Unit-1, Unit-2, Unit-3) each with a generation capacity of 200MW. The turbines for these three units were manufactured by The Ansaldo Energia Ltd. The construction began in the late 1970s and these units have performed well over a long period setting many records regarding maintenance and generation over the other two stages.

This stage again consists of three units (Unit-4,Unit-5,Unit-6) each with a generation capacity of 500MW. The turbines for these three units were manufactured by Bharat Heavy Electricals Limited(BHEL). These Units have shown a relatively lower performance. Especially Unit-6 has imposed many problems on the maintenance departments.

Outside view of STAGE-III (Unit#7)

This stage comprises only one unit (Unit - 7). This is a first of its kind in South India being a computer operated unit. A wide disparity may be seen between the control rooms of the other two stages and this computerized unit. To this day, many Power plant engineers train in this unit to upgrade themselves to this new mode of operation.This unit also has the tallest chimney in Asia.

Once in two years, these units are stopped and overhauled, one unit at a time. The overhauls are usually taken up during the months June to September as the monsoons activate hydel power generation which substitute the power generation lost due to the overhaul of the unit. The same practice is followed all through the country. The overhauls usually take 15 to 20 days per unit provided there is no major repair involved. Major repairs include turbine casing,turbine rotor damage and other damages that require transporting the equipment to another location(usually the manifacturer). The overhauls are the dissipators of the annual PLF of any power plant.

As NTPC Ltd. is a Public Sector Undertaking(PSU), the generation is almost uniformly distributed to 4-5 states all of them sharing about 20-25 percent of the Generation. The States include:

The switchyard is the place where the station last takes care of the power it produces. The switchyard links the power generated to the southern Power grid. The major transmission points are:

NTPC Ramagundam is a Thermal Power Station and hence uses coal. This coal is available at a large scale from the Singareni Coal mining company nearby and is transported using the MGR(Merry-go-round) system wherein, a train comes on one railroute, delivers coal and returns on another route. The wagons arriving by this route are taken for coal collection wherein a mechanism provided underneath the wagons opens on application of air pressure and drops the coal it is carrying. A separate department(MGR Dept.) handles this process.

The station also requires various oils for the following purposes:

These are periodically purchased as per requirement from the Indian oil corporation IOCL establishment nearby.

The plant classifies its departments as O&M and Non-O&M. 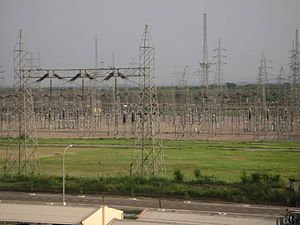 Civil Maintenance takes care of all the civil activities in the plant such as non-mechanical constructions, maintenance of locations, scrap removal and ensuring a proper working condition of minor equipments.

This dept. takes care of the coal transport to the plant.

This dept. takes care of all coal handling processes.

This dept. has the following sections
Boiler Maintenance

This department deals with the maintenance of various control devices and instruments. its considered to be a part of the maintenance section. It has got the following sections. 1.Boiler C&I 2.ACS&DAS C&I 3.Turbine C&I

The plant is headed by the General manager(GM) to whom the AGM's report.The O&M group being reported by the Additional General Manager(O&M) again to whom the AGMs of concerned departments report.

NTPC, Ramagundam has a very beautiful and a serene township.The TTS is the temporary township constructed during the early stages of the plant .Itis now resided by the secondary employees of the organisation( Contractors,Allied organisation employees,service organisations to the township like Dooradarshan...etc...)

The PTS is the permanent township where most off the employees reside with their families.Itt is known for its serenity,cleanliness,Greenery and its parks.

The township has three schools. The k.v,Saint Claire High school and the Sachdeva school of excellence(formerly Chinmaya Vidyalaya).

The township is well facilitated with banking( The State Bank of Hyderabad with an on-site ATM), postal services,telephone and internet services(BSNL),Adequate water supply, 24*7 electricity right from the plant,Civil services and its own security.

There are two Guest houses. Jyothi bhavan for executives and Godavari Bhavan(Field Hostel) for other employees, students and trainees. These are maintained by the Indian Coffee House employees and are equipped with dining facilities thus forming as restaurants for the township residents.

The township has beautiful parks namely the Ambedkar park, the Chacha Nehru park, the priyadarshini park and other small parks. and in it theaters are also there.