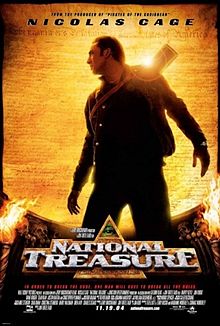 National Treasure is a series of theatrical action-adventure mystery films distributed by Walt Disney Pictures, produced by Jerry Bruckheimer and starring Nicolas Cage as Benjamin Franklin Gates, a treasure hunter who, with the help of his father, Patrick Henry Gates (Jon Voight), his girlfriend, Abigail Chase (Diane Kruger) and his loyal sidekick, Riley Poole (Justin Bartha), uncovers hidden troves and secrets from America's past. Additionally there are a series of novels detailing the ancestors of Ben Gates, all written by Catherine Hapka.

The original National Treasure film centers on the Gates family legend of a fantastic treasure trove of artifacts and gold, hidden by the Founding Fathers of the United States, and the attempts by the scion of the family, Benjamin Franklin Gates, to find the treasure before his ex-friend, Ian Howe (Sean Bean), steals and destroys the Declaration of Independence.

In the sequel to the original 2004 film, black market dealer Mitch Wilkinson (Ed Harris) locates one of the 18 missing pages of John Wilkes Booth's diary, and suggests that Ben's ancestor, Thomas Gates, was a conspirator in the assassination of President Abraham Lincoln, so Ben sets out to prove his innocence by kidnapping the current US President (Bruce Greenwood) and by finding the disappeared hidden truth.

In December 2007, before the second film was released, Nicolas Cage showed interest in doing a third film, believing it should be more international.[1] In early 2008, Disney registered the domains for NationalTreasure3DVD.com and NationalTreasure4DVD.com.[2] In May 2008, Director Jon Turteltaub said that the filmmaking team would take its time on another National Treasure sequel.[3] In September 2008, Jerry Bruckheimer officially confirmed that they were in the process of developing a third film. [4] In November 2008, Bruckheimer said that the writers were in the process of writing the script to the film.[5] In March 2009, Jon Voight, who plays Patrick Gates, said that the script was not yet finished, and was also quoted as saying "I just hope there's good stuff for me to play in it, that Helen (Mirren, who plays his ex-wife) will be back."[6] Disney plans to begin filming in late 2010, after Justin Bartha has finished The Hangover: Part II.[7]

In May 2010, Comingsoon.net interviewed director Jon Turteltaub regarding the film. He stated that Cage's involvement in Ghost Rider: Spirit of Vengeance would not hinder the making of the film, and that filming was scheduled to begin in late 2010. Turteltaub did not reveal any plot details.[8] Also, producer Jerry Bruckheimer briefly talked to Access Hollywood, where he said that the first draft of the screenplay was completed.[8]

There was no novelization of the first movie, but a novelization of the second entitled National Treasure 2: Book of Secrets The Junior Novel was released on November 6, 2007.[9] Parts of the story in the novel version differ slightly from what was actually filmed, owing to changes being made in the screenplay prior to and during production. For example, in the novel, Ben and Abigail photograph the wooden plank found hidden in the Queen's desk and leave it behind, with the car chase following, but in the movie, they take the plank with them on the chase. Also, the date on the statue in Paris, which is also the combination to access the plank is shown as 1865 rather than 1876.

Disney Press has also published a series of spin-off historical novels about ancestors of the Gates Family, all by Catherine Hapka.

The tree below shows the Gates family, including Ben’s ancestors mentioned in the series of novels based on the movies, Changing Tides, Midnight Ride, and Uncharted. A detailed family tree is presented in the novel, Uncharted. Benjamin Franklin Gates' direct line is in bold.