The 2006 NRL Grand Final was the conclusive and premiership-deciding match of the NRL's 2006 Telstra Premiership season. It was played between the first-placed Melbourne Storm and the third-placed Brisbane Broncos clubs on the night of Sunday, 1 October. The 2006 grand final was the first ever to feature teams which were both from outside the borders of New South Wales, in this case the capitals of Queensland and Victoria, yet was played at Sydney's Telstra Stadium.[1] It was the first time the two sides had met in a grand final. They had played each other twice during the 2006 regular season, with Melbourne winning both times. The Storm went into the grand final as favourites, having won the minor premiership (although this was later discounted when salary cap breaches at the club were exposed in 2010). Both teams were looking to keep their perfect grand final records intact: the Broncos with 5/5 and the Storm with 1/1 heading into the game. 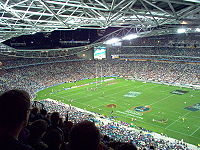 View of the 2006 grand final from the stands of Stadium Australia.

A crowd of 79,609 people turned out, with Hoodoo Gurus and INXS[2] performing before the match which was refereed by Paul Simpkins, who was overseeing his first grand final.

The first points of the match came from a penalty in the ninth minute. Brisbane's Shaun Berrigan, playing at hooker, tried to burrow over the Storm's try-line from dummy half but was ruled to have had the ball taken from his arms by Billy Slater in a two-man tackle.[3] The resulting penalty kick by captain Darren Lockyer in front of the posts was a gift two points for the Broncos to take an early 2-0 lead.[4] Three minutes later, Melbourne halfback Cooper Cronk kicked a 40/20 coming out of his side's territory. Following the subsequent scrum in an attacking position, the Storm raided Brisbane's line and got the first try of the match. Scott Hill did well to evade a few attempted tackles and shoot a remarkable pass around the back of a Broncos defender and into the arms of winger Steve Turner who dived over out wide.[5] Cameron Smith missed the conversion, leaving the score at 4-2. Brisbane then got a scrum of their own close to Melbourne's line after Turner knocked on trying to take a Lockyer bomb.[6] Lockyer, moving across-field fed the ball back inside to Justin Hodges who went over untouched to put the ball down near the posts, affording the Broncos captain another easy kick. No more points were scored in the first half and Brisbane went into the break with an 8-4 lead.[7] Darren Lockyer was limping around in the dressing room but went on to play through the rest of the game.

Eight minutes into the second half, a high tackle by Justin Hodges on Cameron Smith close to the Broncos' line resulted in a minor scuffle and a penalty to the Storm.[8] Melbourne captain Smith decided to take the tap and attack Brisbane's line and a close-range try to Matt King resulted. The scores were then level at 8-all, with the kick to come.[9] Smith, also the Storm's first-choice goal-kicker, was having a problem with his kicking leg so the task fell onto Matt Geyer whose conversion attempt went wide. Ten minutes later a penalty was awarded to the Broncos after a high shot from Billy Slater on Shaun Berrigan and Corey Parker's kick was successful, giving his side a two-point lead at 10-8.[10] Following the re-start kick from Melbourne, Brisbane were working the ball out of their own half and on the fifth tackle scored a brilliant Grand Final try. From dummy-half Berrigan ran then passed back inside to Lockyer who gave a short ball on to Parker who did likewise for Casey McGuire. Before being tackled McGuire tossed the ball blindly back over his head and it was picked up by Lockyer who spun out of a tackle then passed it to Tonie Carroll. Without losing momentum, Carroll passed the ball on to a flying Brent Tate who raced to the corner for the try.[11] The conversion attempt from near the sideline was missed by Parker so the Broncos led by six with seventeen minutes of play remaining. A couple of minutes later the Storm appeared to have scored their third try when a bomb by Cronk was leapt for but unsuccessfully taken by both a Brisbane and a Melbourne player. On its way down the ball was snatched from the air by King who looked to have put it down for his second try but the video referee ruled that the ball had gone forward off the Storm so it was disallowed.[12] In the seventy-third minute, after a strong run by prop Shane Webcke put him in good field position, Lockyer snapped away a successful field goal. This gave the Broncos a 7-point buffer.[13] A frustrated Melbourne side were unable to score in the remaining minutes as Brisbane ground their way towards full-time, the score 15-8 at the final siren.

Brisbane's Shaun Berrigan, playing in his new role as hooker, received the Clive Churchill Medal for man-of-the-match.[14] His dummy-half raids and effective defence were seen as instrumental in his team's victory.

The Broncos' victory was the club's sixth premiership in their nineteen seasons and it broke what was at the time their longest premiership drought (five years). They suffered 11 losses during the season, the most ever by a premiership-winning team. The win also enabled Brisbane to maintain their 100% victory record in Grand Finals, making it six from six. This also made Wayne Bennett the most successful Australian rugby league club coach of all time. In addition the Grand Final victory provided the perfect farewell for retiring Broncos prop-forward Shane Webcke, who left the playing field with a grand final victory in his final match.[15] Also departing the NRL were Casey McGuire and Scott Hill, both bound for Europe's Super League.

Melbourne's television audience for the match was higher than Sydney's.[16] It also rated higher than the AFL Grand Final (played between two non-Victorian teams, the Sydney Swans and West Coast Eagles) in Melbourne, which was held just the day before.

Having won the NRL grand final, the Brisbane Broncos had earned the right to play against 2006 Super League Champions, St Helens in the following February's World Club Challenge.