The National Institute for Basic Biology (基礎生物学研究所, kisoseibutsugaku kenkyuujyo?) (NIBB) is a research institute and post graduate university in Okazaki City, Aichi Prefecture, Japan. NIBB was founded in 1977 to promote biological research in Japan in cooperation with public and private universities, and research institutes.[1][2]

Though NIBB's primary focus is basic biology, research at NIBB covers a wide variety of biological fields, such as cell biology, developmental biology, neurobiology, evolutionary biology, environmental biology, and theoretical biology, and is conducted to elucidate general and fundamental mechanisms underlying various biological phenomena. The results of the research conducted at NIBB are regularly published in peer reviewed publications such as Science, Nature, and the Proceedings of the National Academy of Sciences.[3][4][5]

In addition to being a research institute, NIBB also functions as an institution of higher education.

NIBB constitutes the Department of Basic Biology in the School of Life Science of the Graduate University for Advanced Studies (SOKENDAI). The Department offers a five-year Doctoral program for university graduates and a three-year senior Doctoral course for students who have already completed a Master's course.

Graduate students enrolled in other universities and institutions are eligible to conduct research for fixed periods of time under the supervision of NIBB professors.

NIBB acts as a gateway between the international scientific community and researchers in Japan through various conferences, seminars, and hands-on practical courses.[6][7]

NIBB has hosted the NIBB Conference every year since the opening of the Institute in 1977. The purpose of the conference is to provide active researchers with the opportunity to freely discuss current issues in various areas of biological research.

The Okazaki Biology Conference (OBC) initiated in 2003, has as its objective the establishment of interdisciplinary networks in the pursuit of answers to major questions in biology.

NIBB performs academic exchange programs with the European Molecular Biology Laboratory (EMBL) and the National Institutes of Natural Sciences (NINS) in an effort to promote intellectual, educational and technological exchange in the fields of biology and molecular biology.[8] Academic cooperation between NIBB, NINS, and EMBL includes: 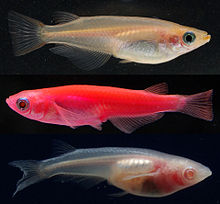 The National BioResource Project (NBRP) is a national project for the systematic accumulation, storage, and supply of recognized bioresources (experimental animals and plants, cells, DNA, and other genetic resources) which are widely used as tools in life science research. To promote this project, NIBB has been appointed as a research and supply center for medaka (Oryzia latipes), a small, egg-laying freshwater teleost fish found in brooks and rice paddies, whose usefulness as a vertebrate model first developed in Japan. The use of medaka as a research organism in biology has drawn increasing attention since its full genome sequence recently became available. The medaka supplied by NIBB include standard strains, wild stocks, inbred strains, related species and spontaneous and induced mutants. NIBB is also a subcenter for NBPR’s work with Japanese morning glory and zebrafish.[10]

The Director-General oversees the operation of NIBB, assisted by the Advisory Committee for Programming and Management. The Advisory Committee, composed of professors within NIBB and an equal number of leading biologists outside NIBB, advises the Director-General on important matters such as planning joint research programs as well as on the scientific activities of NIBB. The Advisory Committee makes recommendations on the appointments of new Directors-General, faculty appointments, NIBB's annual budget and future prospects. The Office of Public Relations and International Cooperation is the central office for public relations and the management of conferences and other extramural activities. The department also assists the Director-General with NIBB's evaluation procedures and in planning long-range strategies for the institute. Administration of NIBB is undertaken by the Okazaki Administration Office under the direct auspices of the Administration Office of NINS.