Not to be confused with Object-relational mapping.

Example of the application of Object Role Modeling in a "Schema for Geologic Surface", Stephen M. Richard (1999).[1]

Object Role Modeling (ORM) is a method for conceptual modeling, and can be used as a tool for information and rules analysis, ontological analysis, and data modeling in the field of software engineering.[2]

Object Role Modeling is a fact-oriented method for performing systems analysis at the conceptual level. The quality of a database application depends critically on its design. To help ensure correctness, clarity, adaptability and productivity, information systems are best specified first at the conceptual level, using concepts and language that people can readily understand. The conceptual design may include data, process and behavioral perspectives, and the actual DBMS used to implement the design might be based on one of many logical data models (relational, hierarchic, network, object-oriented etc.).[3]

The designer of a database builds a formal model of the application area or Universe of Discourse (UoD). The model requires a good understanding of the UoD and a means of specifying this understanding in a clear, unambiguous way. Object-Role Modeling (ORM) simplifies the design process by using natural language, as well as intuitive diagrams which can be populated with examples, and by examining the information in terms of simple or elementary facts. By expressing the model in terms of natural concepts, like objects and roles, it provides a conceptual approach to modeling. Its attribute-free approach promotes semantic stability.

The roots of ORM can be traced to research into semantic modeling for information systems in Europe during the 1970s. There were many pioneers and this short summary does not by any means mention them all. An early contribution came in 1973 when Michael Senko wrote about "data structuring" in the IBM Systems Journal. In 1974 Jean-Raymond Abrial contributed an article about "Data Semantics". In June 1975, Eckhard Falkenberg's doctoral thesis was published and in 1976 one of Falkenberg's papers mentions the term "object-role model".

In 1989 Terry Halpin completed his PhD thesis on ORM, providing the first full formalization of the approach and incorporating several extensions.

Also in 1989, Terry Halpin and G.M. Nijssen co-authored the book "Conceptual Schema and Relational Database Design" and several joint papers, providing the first formalization of Object-Role Modeling. Since then Dr. Terry Halpin has authored six books and over 160 technical papers.

A recent variation of ORM is referred to as FCO-IM. It distinguishes itself from traditional ORM in that it takes a strict communication-oriented perspective. Rather than modeling the domain and its essential concepts, it purely models the grammar used to discourse about the domain. Another recent development is the use of ORM in combination with standardised relation types with associated roles and a standard machine-readable dictionary and taxonomy of concepts as are provided in the Gellish English dictionary. Standardisation of relation types (fact types), roles and concepts enables increased possibilities for model integration and model reuse.

example of an ORM2 diagram

ORM2 (second-generation ORM) is a new incarnation of Object-Role Modeling, supported by various modeling tools to support the new notation. Dr. Terry Halpin lead the effort of the NORMA ORM modeling tool spearheaded by Neumont University and currently through The ORM Foundation,[4] a UK-based non-profit organization dedicated to the promotion of the fact-oriented approach to information modeling

ORM2 leverages the work done by the BSBR group.

The main objectives for the ORM 2 graphical notation are:[5] 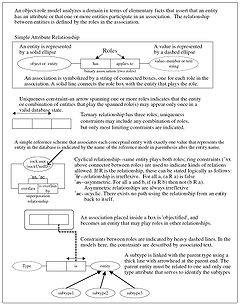 ORM's rich graphic notation is capable of capturing many business rules that are typically unsupported as graphic primitives in other popular data modeling notations.

A graphical NIAM design tool which included the ability to generate database-creation scripts for Oracle, DB2 and DBQ was developed in the early 1990s in Paris. It was originally named Genesys and was marketed successfully in France and later Canada. It could also handle ER diagram design. It was ported to SCO Unix, SunOs, DEC 3151's and Windows 3.0 platforms, and was later migrated to succeeding Microsoft operating systems, utilising XVT for cross operating system graphical portability. The tool was renamed OORIANE and is currently being used for large data warehouse and SOA projects.

The growth of ORM has followed the availability of a series of steadily improving ORM tools.

The early ORM tools such as IAST (Control Data) and RIDL* were followed by InfoDesigner, InfoModeler and VisioModeler.

In the same year, a companion "how to" book was published by Morgan Kaufmann entitled "Database Modeling with Microsoft Visio for Enterprise Architects" .[6] Microsoft has retained the ORM functionality in the high-end version of Visual Studio 2005 and the Morgan Kaufmann book remains a suitable user guide for both versions.

The next "in the works" ORM tool is an open source tool called NORMA (Natural ORM Architect for Visual Studio). 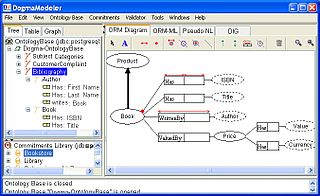 DogmaModeler is a free ontology modeling tool based on Object role modeling. The philosophy of DogmaModeler is to enable non-IT experts to model ontologies with a little or no involvement of an ontology engineer.

This challenge is tackled in DogmaModeler through well-defined methodological principles. The first version of DogmaModeler was developed at the Vrije Universiteit Brussel.

The DogmaModeler Project[8] shows no activity since its creation in 2006, and the source code for the project is not available through that site. The latest version of the program, available at the http://jarrar.info/Dogmamodeler website is dated on October 27, 2006.

Since then the project seems to have been continued and expanded into several other tools at the Vrije Universiteit Brussel's Semantics Technology and Applications Research Laboratory (VUB STARLab).[9] A note on that site states "Users who only use DOGMAModeler for their own researches can contact (author's email) for the free download."[10]

The former ORM tool known as VisioModeler is freely available as an unsupported product from Microsoft Corporation (as a 25 MB download). Models developed in VisioModeler may be exported to Microsoft's current and future ORM solutions. To obtain the free VisioModeler download, go to http://download.microsoft.com, search by selecting Keyword Search, enter the keyword "VisioModeler", select your operating system (e.g. Windows XP—Note: VisioModeler does NOT work under Windows Vista), change the setting for "Show Results for" to "All Downloads", and hit the "Find It!" button. This should bring up a download page that includes the title "VisioModeler (Unsupported Product Edition)". Clicking on this will take you to the link for the download file MSVM31.exe. Click on this to do the download.

Microsoft included a powerful ORM and logical database modeling solution within its Visio for Enterprise Architects (VEA) product. The 2005 release of VEA also included some minor upgrades (e.g. a driver for SQL Server 2005 was included).

A modeling tool called CaseTalk[11] based on the ORM-dialect known as Fully Communication Oriented Information Modeling (FCO-IM) is available from Bommeljé Crompvoets en partners b.v., headquartered in Utrecht, The Netherlands. To find out more about this tool, check the CaseTalk website.

A freeware ORM tool known as Infagon is available from Mattic software. Infagon is also based on the FCO-IM dialect. To download or obtain more details about this tool, click the Infagon home page.[12]

As of April 2009[update], the NORMA project[18] delivers frequent releases and is almost ready to encompass the entire life-cycle of databases.

Advantages of NORMA are these: