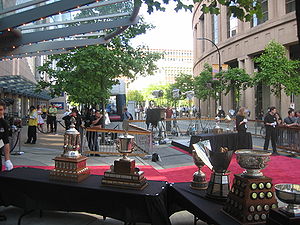 Trophies on display at the 2006 NHL Awards Ceremony.

The National Hockey League presents numerous annual awards and trophies to recognize its teams and players. The oldest, and most recognizable, is the Stanley Cup. First awarded in 1893, the Stanley Cup is awarded to the NHL's playoff champion. The Stanley Cup is the third trophy to be used as the league's championship, as for the first nine years of the NHL's existence, it remained a multi-league challenge cup.[1]

The NHL's first championship trophy was the O'Brien Cup, which was created by the National Hockey Association in 1910 and transferred to the NHL in 1918, after which it was awarded to the playoff champion until 1923.[2] The O'Brien Cup was retired in favour of the Prince of Wales Trophy in 1924, which became the league's championship until the demise of the Western Hockey League following the 1926 season, leaving the Stanley Cup exclusively in the hands of the National Hockey League.

The first individual trophy was the Hart Trophy, first awarded in 1924 to the league's most valuable player. The Lady Byng Trophy followed a year later, awarded to the most gentlemanly player in the league. Two years later, the Vezina Trophy was created for the NHL's top goaltender. The Conn Smythe Trophy was first awarded to the NHL's playoff most valuable player in 1965. Presently, the NHL has 18 annual individual trophies and awards, the most recently created being the Mark Messier Leadership Award, first awarded in 2007, and the NHL General Manager of the Year Award which was inaugurated in 2010.

Out of the original individual NHL trophies that were awarded prior to expansion (which would be followed by the creation of more individual awards), several players are tied with three awards in the same season. Stan Mikita won the Hart, Art Ross, and Lady Byng trophies, doing so consecutively in the 1966–67 and 1967–68 seasons.[3] Guy LaFleur and Wayne Gretzky have each won the Art Ross, Hart, and Conn Smythe trophies, as well as the Cup, in 1976-77 and 1984-85, respectively. Bobby Orr won the Hart, Norris, and Conn Smythe trophies, along with the Stanley Cup, in 1969–70 and 1971-72. In 1970, Orr also won the Art Ross which makes him the only player to capture four original NHL awards in a single season (Orr also earned a NHL First Team selection, and the only honor which he was eligible for but did not win was the Lady Byng due to his physical style of play).[4][5]

In addition, the First and Second All-Star Teams have been named since the 1930–31 NHL season to honor the best performers over the season at each position, as well as the NHL All-Rookie Team from 1983 onwards.

Most of the individual trophies and all-star selections are presented at an annual awards ceremony held in late June after the conclusion of the playoffs.

The league has also given some ephemeral awards over the years, including the NHL/Sheraton Road Performer Award Winner, to be awarded to the player who accrued the most road points during the regular season. It was awarded to Joe Sakic of the Colorado Avalanche in 2004 and not subsequently.