Northeast India refers to the easternmost region of India consisting of the contiguous Seven Sister States, Sikkim, and parts of North Bengal (districts of Darjeeling, Jalpaiguri, and Koch Bihar). Northeast India is ethnically distinct from the rest of India and has strong ethnic and cultural ties with Southeast Asia, with strong ethnic cultures that had escaped Sanskritization in the ethnic groups of Kuki and some other tribes. Linguistically the region is distinguished by a preponderance of Tibeto-Burman languages. It is officially recognized that the eight states form a special category: the North Eastern Council (NEC)[1] was constituted in 1971 as the nodal agency for the economic and social development of the eight states, the North Eastern Development Finance Corporation Ltd (NEDFi)[2] was incorporated on August 9, 1995 and the Ministry of Development of Northeastern Region (DoNER)[3][4] was set up in September 2001.

Among the North Eastern states, Sikkim became an Indian protectorate in 1947 and a full state in 1975. The Siliguri Corridor in West Bengal, with an average width of 21 km to 40 km, connects the north eastern region with the rest of India. More than 2000 km of boundary is shared with other countries: including Nepal, China, Bhutan, Burma and Bangladesh. 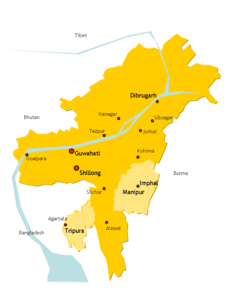 After the Indian Independence from British Rule in 1947, the Northeastern region of British India consisted of Assam and the princely states of Manipur and Tripura. Later independent movements such as Swatantra Tripura Committee were formed against grouping all the north eastern states under Assam. The states of Nagaland, Meghalaya and Mizoram were formed in the 1960-70s. From Shillong, the capital of Assam was shifted to Dispur, now a part of Guwahati. Shillong became the capital of Meghalaya. Most of these areas had been incorporated into mainstream India during the British Raj when colonial authorities annexed traditionally separate border states into Indian territory to form a buffer between their colony and external powers (i.e.: Assam, Manipur and Tripura in the Northeast, and Balochistan and the North West Frontier Province in the northwest). After independence in 1947, extension of the Indian state and political apparatus has been a challenge.[5]

A region called South Tibet, which makes up most of the land governed by Arunachal Pradesh, is claimed by China. Sino-Indian relations degraded during the Sino-Indian War of 1962. The cause of the escalation into war is still disputed by both Chinese and Indian sources. During the war in 1962, the PRC captured much of the NEFA (North-East Frontier Agency) created by India in 1954. However,China soon declared ceasfire and due to Soviet veto in UN withdrew back to the McMahon Line and returned Indian prisoners of war in 1963.

The region is known for its unique culture, handicrafts, martial arts, and scenic beauty. Problems include insurgency, unemployment, drug addiction, and lack of infrastructure. Since the beginning of the economic liberalization in the 1990s, studies have shown that this region is lagging behind the others in terms of development.

Largest cities according to population of census 2011 - 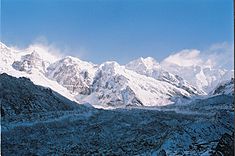 View of the Himalayas from Sikkim.

Northeast India has a predominantly humid sub-tropical climate with hot, humid summers, severe monsoons and mild winters. Along with the west coast of India, this region has some of the Indian sub-continent's last remaining rain forests. The states of Arunachal Pradesh and Sikkim have a montane climate with cold, snowy winters and mild summers.

The isolation of the Northeastern states began earlier as a result of British imperialism, when the region was cut-off from its traditional trading partners (Bhutan, Myanmar and Indo-China).[7] In 1947 Indian independence and partition made this a landlocked region, exacerbating the isolation that is being recognized lately, but not studied yet.[8] Soon it became a captive market for mainstream India.[9]

The northeastern states, having a comparatively small electorate (3.8% of India's total population) are alloted just 25 out of a total of 543 seats in the Lok Sabha (4.6% of the total number of seats).

The northeastern states are home to many ethnic groups, that are engaged in self-preservation[dubious – discuss][citation needed]. In recent times, some of these struggles have turned violent, leading to proliferation of armed insurgent groups, like the ULFA, NLFT.,[10] NDFB[11] and NSCN.[12] Soon after the Sino-Indian War of 1962 and especially after the rise of insurgency in the region, security influence on policies has increased.[13]

Of late there is a wide recognition among policy makers and economists of the region that the main stumbling block for economic development of the Northeastern region is the disadvantageous geographical location.[14] The coming of globalisation propagates deterritorialisation and a borderless world which is often associated with economic integration. With 98 percent of its borders with China, Myanmar, Bhutan, Bangladesh and Nepal, Northeast India has better scope for development in the era of globalisation. [15] As a result, a new policy developed among intellectuals and politicians that one direction the Northeastern region must be looking to as a new way of development lies with political integration with the rest of India and economic integration with the rest of Asia, with East and Southeast Asia in particular as the policy of economic integration with the rest of India did not yield much dividends. With the development of this new policy the Government of India directed its Look East policy towards developing the Northeastern region. This policy is reflected in the Year End Review 2004 of the Ministry of External Affairs, which stated that: “India’s Look East Policy has now been given a new dimension by the UPA Government. India is now looking towards a partnership with the ASEAN countries, both within BIMSTEC and the India-ASEAN Summit dialogue as integrally linked to economic and security interests, particularly for India’s East and North East region.”[16] 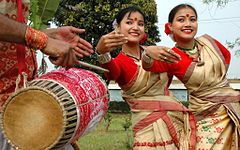