NEXUS is a joint Canada-United States program designed to let pre-approved, low-risk travelers cross the US-Canada border quickly. Members of the program can avoid long waits at border entry points by using self-serve kiosks at airports, reserved lanes at land crossings, or by phoning border officials when entering by water. The program is operated by the Canada Border Services Agency and U.S. Customs and Border Protection. A NEXUS membership card is a valid document under the Western Hemisphere Travel Initiative.

To qualify for the program, an applicant must be a citizen or permanent resident of Canada or the United States, and lived continuously in one or both of those countries for at least the past three years. Applicants must also be legally admissible to both nations, complied with immigration and customs regulations during previous travel, as well as having a criminal history check. Additionally, if the applicant is under 18, both parents must provide their written consent.[1]

NEXUS applications can be submitted online via the US Customs and Border Protection website or a paper application, processed by the Canadian Border Services Agency. The application fee is $50 USD or CAD, which is waived for applicants under the age of 18.

Applicants are screened for citizenship and immigration status, checked for criminal history and positive matches on U.S. Federal Bureau of Investigation (FBI), Canadian Security Intelligence Service (CSIS), Royal Canadian Mounted Police (RCMP), United Nations, and Interpol terrorism and no-fly list databases and United Kingdom Police National Computer[citation needed]. Applicants who pass the initial screening are interviewed in person by agents of both US and Canadian border authorities (typically one right after the other). Applicants are usually asked to explain their motives for joining the program and typical reasons for traveling, as well as about their employment and residential histories. Documents proving identity, nationality, and admissibility are physically verified and the applicant's fingerprints, photograph, and iris scan (if desired for air travel use) are taken. Program rules and procedures as well as customs regulations as they pertain to NEXUS are also explained in detail.

Members receive a RFID enabled NEXUS card, valid for five years from the applicant's birthday following card issuance. Renewal typically takes place six months prior to expiration, and members are required to attend another interview to verify that they still qualify for the program.

Use at land crossings

NEXUS cardholders are generally screened more quickly at the border, however they are still subject to standard immigration and customs checks, and may be selected for secondary screening. Participating border crossing points typically have one lane solely reserved for NEXUS use and some will also designate a second lane for NEXUS use on an as needed basis. A vehicle can only use the NEXUS lane if all passengers (including children) hold a valid NEXUS card, and nothing requiring a special customs declaration or payment of duty is being brought into the country (see below.) 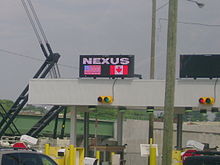 A NEXUS lane at the U.S. side of the Ambassador Bridge.

Items permitted in a NEXUS lane

Items prohibited in a NEXUS lane

Any item requiring payment of duty or tax, as well as certain restricted and sensitive items cannot be brought through a NEXUS lane. Examples include:

Members are advised to inquire ahead of time with the appropriate authorities, and if in doubt, to use a standard lane. It is important to note that nearly every lane crossing in either direction, and at almost (if not all) ports of entry is equipped to read nexus cards. This means that if nexus lane has more cars than the general lane nexus card holders can use the quicker general lane.

NEXUS members who are citizens of the United States may utilize SENTRI lanes when entering the US from Mexico by land, but must be traveling in an approved, registered vehicle[2] (SENTRI requires members to register their vehicles into the program, which involves a thorough inspection by CBP, whereas NEXUS has no such requirement). Regardless of whether in an approved vehicle or not, the NEXUS card is a WHTI compliant document, and may be used in any standard lane from Mexico into the US as proof of identity and citizenship.

A NEXUS card is the only acceptable alternative to a passport for traveling between the United States and Canada via air (citizens of other countries must still hold a valid passport in addition to their NEXUS card). Passengers entering or leaving Canada via participating international airports utilize a kiosk to report to immigration authorities (CBSA or CBP) while an iris scan is used to verify identity. Members must fill out a customs declaration card for the country they are entering and are subject to additional questioning by border personnel as well as secondary or random screenings.

In the United States, a trusted traveler card such as NEXUS is a valid secured document under the Western Hemisphere Travel Initiative, and may be used by itself to reenter the United States from Canada, including by air. Although the card creates a presumption of nationality, neither US nor Canadian law viewed the NEXUS card as full proof of citizenship. Nexus cards issued after September 2010 are accepted as proof of citizenship (if the card holder is a citizen of either country) and the traveler is no longer required to carry the passport.

NEXUS and FAST membership cards will now be accepted as proof of identity and as documents that denote citizenship when entering Canada at all land and marine ports of entry. This means that citizens of Canada and the United States who are NEXUS or FAST members, and are carrying with them valid membership cards, are no longer required to carry other supplementary documents such as passports or birth certificates with them when entering Canada by boat or by land, when using non-NEXUS or non-FAST lanes.[3]

NEXUS and FAST members who are not permanent residents of Canada or the United States are still required to travel with a passport and proof of permanent residence, and may be requested to present these documents to a border services officer upon arrival at the border.

NEXUS cards are, in theory, acceptable identification documents to present at TSA checkpoints, but reports suggest they are often rejected by poorly-trained document checkers.

Locations at which NEXUS is available