The Non-Line of Sight Launch System (NLOS-LS) was a self-contained missile launcher system that was under development by NETFIRES LLC, a partnership between Lockheed Martin and Raytheon. Each Container Launch Unit (CLU) holds 15 missiles, and a self-locating networked communications system. CLUs can be linked for coordinated launching, with the missiles fired and controlled remotely via autonomous vertical launch. The weapon is roughly 2 meters tall.

The program was canceled early 2011. It was being developed for the United States Navy's Littoral Combat Ship, but has been criticised for performance issues. The Griffin missile has been recommended for use instead. NLOS-LS was to be use primarily on the United States Army's Future Combat Systems before it was canceled. 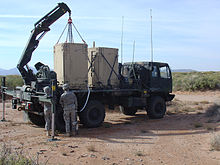 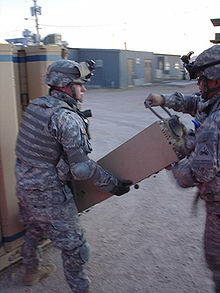 There were to be two types of missile used with NLOS-LS: the Precision Attack Munition (PAM) and the Loitering Attack Munition (LAM). The LAM was originally contracted to Lockheed Martin Missiles and Fire Control, but the contract was terminated after costs rose and tests went poorly.[citation needed] As it stands now, the PAM is the only armament currently being designed for the NLOS-LS.[1]

Used to attack vehicles, armor, bunkers, and other targets of opportunity. Uses 3 modes of guidance, GPS/INS, semi-active laser homing, and autonomous imaging infrared. Carries a multi-mode warhead effective against several types of targets. It also includes an online library of pictures of targets, so that it can visually identify what it is homing in on.

Designed to fly to a preset area and loiter while autonomously seeking out targets.

The JUMPER missile system from Israel Aerospace Industries uses a similar concept, but with 8 missiles instead of 15 and without the IR seeker.[16]