The National Council on U.S.-Arab Relations

The National Council on U.S.-Arab Relations 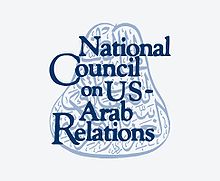 The logo of The National Council on U.S. Arab-Relations.

The National Council on U.S.-Arab Relations (NCUSAR) is an American non-profit organization NGO dedicated to improving American knowledge and understanding of the Arab world.

Founded in 1983, NCUSAR has public charity status in accordance with Section 501 (c) (3) of the Internal Revenue Code. All contributions are tax-deductible to the fullest extent allowed by law.

The headquarters of the Council are located at 1730 M Street, Washington DC. Utilizing its politically central location and ties with sister organizations, the Council plays a leading role in convening regular meetings of the heads of a dozen Arab-U.S. relations organizations devoted to sharing information, discussing strategies, avoiding duplication of effort, and identifying and pursuing opportunities for greater inter-organizational cooperation.

The Council is staffed by professionals and experts in the field of Arab politics. Most notable is President and CEO Dr. John Duke Anthony. Vice Presidents Patrick Macino and Dr. James Winship act as Director of Development and Program Manager respectively, while Megan Geissler heads the nationally recognized Model Arab League. These managers are backed by a team of interns who work seasonally. A fall spring internship opportunity is offered to college students, and a special fellowship exists for summer interns.

The National Council is supported primarily by philanthropists, individuals, and institutions in the United States and the Arab world. Their involvement with the Council often begins with a single event or activity and grows into a broader and lasting relationship based on a shared commitment to the Council's vision and mission. The number of people involved with the Council has grown greatly over the years thanks to connections that developed into significant bonds of cooperation.

The National Council's vision is a relationship between the United States and its Arab partners, friends, and allies that rests on as solid and enduring a foundation as possible. This foundation is dedicated to mutual political endeavors, economic ventures, and reciprocal appreciation for culture and heritage.

The National Council's mission is educational. It seeks to enhance American awareness understanding of Arab countries, the Middle East, and the Islamic world. It fulfills these goals by promoting programs for leadership development, educational lectures and publications, and public forums.

NCUSAR hosts the annual Arab-U.S. Policymakers Conference, a gathering of prominent minds to discuss that year’s pressing issues in the Arab world. It also sponsors the intercollegiate Model Arab League, a student forum similar to the Model United Nations. Study abroad opportunities exist in the form of the Yemen College of Middle Eastern Studies and the Cairo League of Arab States Exchange. The National Council on U.S.-Arab Relations periodically sponsors public educational programs on Capitol Hill. There, an assemblage of domestic and internationally renowned specialists analyze, discuss, and debate issues of importance to the relationship between the U.S., Middle East, and Islamic World. Such events seek to strengthen bonds of trust and friendship while examining complex political issues.

As a public service the Council serves as a nexus of information and contacts for grassroots, governmental, business, religious, and international institutions. In these ways the Council helps strengthen and expand the overall Arab-U.S. relationship.

In addition to the distribution of routine newsletters, the Council provides a number of valuable resources concerning Arab politics, history, and relation with the West. Video and audio recordings as well as transcripts of events hosted by the Council are made available to the public on a regular basis. Most notable of these are videos and transcripts of the forum discussions held at the annual Arab-U.S. Policymakers Conference. Also offered are free essays and articles published by Dr. John Duke Anthony, who has written in the past for Encyclopedia Britannica and the Gulf Co-operation Council. The NCUSAR also posts resources it deems useful in spreading knowledge about the Arab World.

The National Council publishes the Saudi-U.S. Relations Information Service (SUSRIS) The SUSRIS project offers an objective and comprehensive view of the U.S.-Saudi Arabia relationship. SUSRIS’s main goal is to provide information from a variety of sources that would otherwise be difficult for most readers to uncover. It’s free e-newsletter offers original materials such as interviews, essays, and more. Since its launch in 2003, the response to this resource has been extraordinary, with monthly Web site visits measured in the millions. The success of this publication is clear as SUSRIS is routinely cited by major international media as a news source. A subscription to the e-newsletter is free and open to the general public.