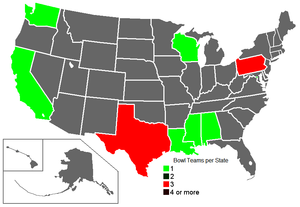 Number of bowl teams per state

The 1936-37 NCAA College Football Bowl Games were the first to feature the Cotton Bowl Classic and Bacardi Bowl, which would complement the Orange, Rose, Sugar Bowl and Sun Bowl as the fifth and sixth post-season games. This was the only season that the Bacardi Bowl was recognized by the NCAA.