All Division I FBS independents are eligible for a Bowl Championship Series bowl provided they meet eligibility requirements. Notre Dame receives an automatic bid by finishing in the top eight of the final BCS ranking. Notre Dame also has other bowl agreements as part of its affiliation with the Big East Conference, and Navy and Army have agreements with the Military Bowl (formerly the EagleBank Bowl).[1]

Notre Dame is one of the most prominent programs in the country. Due to its national popularity built over many years, Notre Dame is the only individual school to have its own national television contract,[4][5] and is the only independent program to be part of the Bowl Championship Series coalition and its guaranteed payout. These factors help make Notre Dame one of the most financially valuable football program in the country, thus negating the need for Notre Dame to secure revenue by joining a conference.[6][7]

Notre Dame easily fills its annual schedule without needing conference games to do so. It has longstanding rivalries with many different programs around the country, including annual rivalry games with USC, Michigan, Michigan State, Navy, and Purdue. All Notre Dame home games and most away games are on national television, so other teams have a large financial incentive to schedule the university. If Notre Dame were to join a conference, it would likely have to eliminate or reduce the frequency of several rivalries.

Two of the remaining independent programs are two of the service academies, Army and Navy. Whereas television and bowl appearances are important sources of revenue and advertising for most other universities and their football games, the United States federal government fully funds the service academies, effectively rendering such income superfluous.

Both service academies have annual games guaranteed with each other and with Air Force. Navy has an annual rivalry game with Notre Dame and Army has a semi-regular rivalry with Notre Dame. Television rights for the longstanding Army–Navy Game, which is the last regular season game in the NCAA, serve as a significant revenue source for the programs. The academies also use their football programs to recruit for their services; without a conference schedule, the service academies are able to more easily schedule games around the country.

During the conference realignment that saw the university choose football independence in August 2010, some saw it as a potential future "Notre Dame of the West". Both are prominent faith-based schools; Notre Dame is arguably the best-known Catholic university in the U.S., while BYU is the flagship university of the LDS Church. The 1984 team's national championship is the most recent by a university that is not a current member of the BCS coalition. BYU was getting less than $2 million a year through its contract with The MTN, the TV network of the Mountain West Conference. BYU has its own cable channel,[8] but they had a very restrictive contract which did not allow BYU to broadcast its own football games.[9] The new contract with ESPN will pay BYU about the same amount each game that they were getting each season with The MTN[10] and allow for greater freedom with their own channel. 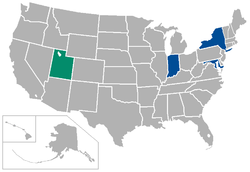 The following is a complete list of teams which have been Division I-A (FBS) Independents since the formation of Division I-A in 1978.