The NBC Studios in New York, New York is located at 30 Rockefeller Plaza (on 49th Street, between 5th and 6th Avenues) in Manhattan, the historic GE Building houses the headquarters of the NBC television network, its parent General Electric, and NBC's flagship station WNBC (Channel 4), as well as cable news channel MSNBC.

When NBC Universal relocated, 24-hour cable news television network MSNBC joined the network in New York on that day as well. The new studios/headquarters for NBC News and MSNBC are located in one area.

Because of the preponderance of radio studios, that section of the Rockefeller Center complex became known as Radio City (and gave its name to Radio City Music Hall, a gigantic and renowned venue for theatre and films located in Radio City). Even into the present decade, tickets for shows based at 30 Rock bear the legend "Radio City." 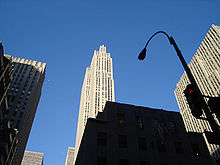 30 Rockefeller Center, also known as the GE Building, is the world headquarters of NBC.

Among the shows originating at 30 Rockefeller Plaza:

Most of these facilities are no longer used by NBC.