NASA robots are robotic devices used to aid, augment, or substitute for astronauts in order to do difficult or rote tasks such as repairs in dangerous environments (such as those with radiation or micrometeorite risks), routine procedures (video capture), etc. 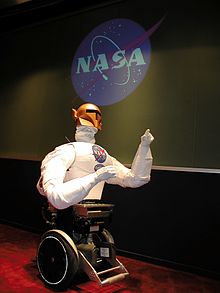 Robonaut is a joint DARPA–NASA project designed to create a humanoid robot which can function as an equivalent to humans during extra-vehicular activity (space walks). There are multiple versions of this robot using various locomotion methods. Some versions of the robot use the Segway HT for locomotion [1]. Robonaut uses telepresence and various levels of robotic autonomy. While not all human range of motion and sensitivity has been duplicated, the robot's hand has fourteen degrees of freedom and uses touch sensors at the tips of its fingers.