The bank is headquartered in a complex of three buildings in Chicago's Loop neighborhood. The original 21-story building was constructed in 1910 at 119 West Monroe Street. The entrance to the building is flanked by two bas-relief sculptures of lions which continue to be used in the bank's logo. In 1960, a 23-story structure was added to the east with the address of 111 West Monroe. In 1974, a second 38-story tower was added to the west with the address of 115 South LaSalle Street. Both additions were designed by the firm of Skidmore, Owings and Merrill and are in the modern style. The bank uses the address of the 1960 building.[1] 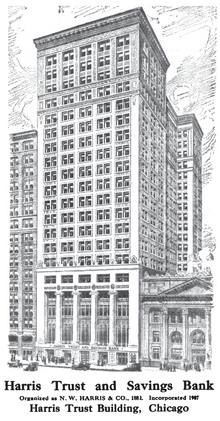 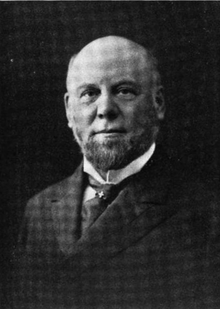 In 1882, Norman Wait Harris established N.W. Harris & Co., a Chicago-based municipal bond broker and the forerunner of Harris Bank. Other key events for Harris Bank include:

BMO Harris N.A. is a member of the Federal Reserves system.

On December 17th, 2010, Bank of Montreal (BMO) agreed to purchase Marshall & Ilsley in an all-stock transaction valued at about $4.1 billion USD. Marshall & Ilsley will be combined with BMO's Harris Bank subsidiary based in Chicago, Il.[2] 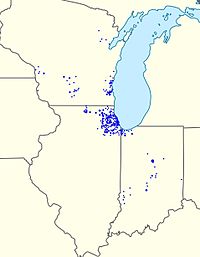 BMO Harris Bank N.A. is the 16th largest (by total assets) commercial bank in the US (not including total assets from parent company)[3]. With offices primarily located in the Midwest, the bank operates more than 700 branches and 1350 ATMs in Illinois, Wisconsin, Minnesota, Indiana, Missouri, Kansas, Arizona, Nevada and Florida. It is the third-largest Chicago-area bank based on number of full-service branches. 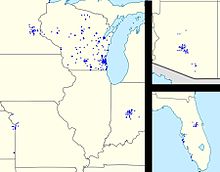 The executive management of Harris includes: