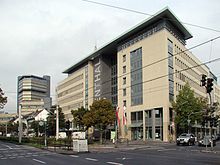 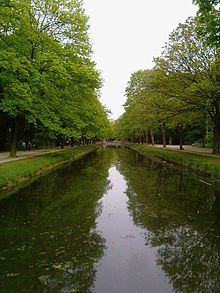 Rautenstrauchstraße canal near the University's Institute for Biology

campus of the Cologne University Hospital

Many parts of Lindenthal are dominated by academic and research campuses, primarily linked to the University of Cologne and the German Sport University. The later has a campus at Sportpark Müngersdorf, next to RheinEnergieStadion and the European College of Sport Science.

The Cologne University Hospital has a vast campus around Universitätsstraße. Other institutions include the Max Planck Institutes for Biology of Ageing and Plant Breeding Research.

During the Cold War, the headquarters of the I Belgian Corps was located in Junkersdorf.

Lindenthal is served by numerous railway stations and highway. Train station include Köln-Lövenich, Köln-Müngersdorf/Technologiepark and Köln-Weiden West, as well as numerous light rail stations of Cologne Stadtbahn lines 1, 7, 9, 13 and 18. Aachener Straße and Luxemburger Straße connect Lindenthal with the Cologne Ring and Cologne Beltway.

Lindenthal is "twinned" with the following cities:[1]