Racket (formerly called PLT Scheme) is a multi-paradigm programming language in the Lisp/Scheme family, that also serves as a platform for language creation, design, and implementation.[4][5] The Racket platform has four primary components:

The programming language itself is known for its powerful macro system which enables the creation of embedded and domain-specific languages, language constructs such as classes or modules, and separate dialects of Racket with different semantics.[8][9][10][11]

Matthias Felleisen founded PLT in the mid 1990s, first as a research group, soon after as a project dedicated to the production of pedagogic materials for novice programmers (lectures, exercises/projects, software). In January 1995, the group decided to develop a pedagogic programming environment based on Scheme. Matthew Flatt cobbled together MrEd—the original virtual machine for Racket—from libscheme, wxWidgets, and a few other free systems.[12] In the years that followed, a team including Flatt, Robby Findler, Shriram Krishnamurthi, Cormac Flanagan, and many others produced DrScheme, a programming environment for novice Scheme programmers and a research environment for soft typing. The main development language that DrScheme supported was called PLT Scheme.

In parallel, the team started conducting workshops for high school teachers, training them in program design and functional programming. Field tests with these teachers and their students provided essential clues for the direction of the development.

Over the following years, PLT added teaching languages, an algebraic stepper,[13] a transparent read-eval-print loop, a constructor-based printer, and many other innovations to DrScheme, producing an application-quality pedagogic program development environment. By 2001, the core team (Felleisen, Findler, Flatt, Krishnamurthi) had also written and published their first textbook, How to Design Programs, based on their teaching philosophy.

The first generation of PLT Scheme revisions introduced features for programming in the large with both modules and classes. Version 42 introduced units–a first-class module system–to complement classes for large scale development. The class system gained features (e.g. Java-style interfaces) and also lost several features (e.g. multiple inheritance) throughout these versions.[9] The language evolved throughout a number of successive versions, and gaining milestone popularity in Version 53, leading to extensive work and the following Version 100, which would be equivalent to a "1.0" release in current popular version systems.

The next major revision was named Version 200, which introduced a new default module system that cooperates with macros. In particular, the module system ensures that run-time and compile-time computation are separated in order to support a "tower of languages."[14] Unlike units, these modules are not first-class objects.

Version 300 introduced Unicode support, foreign library support, and refinements to the class system. Later on, the 300 series improved the performance of the language runtime with an addition of a JIT compiler and a switch to a default generational garbage collection.

By the next major release, the project has switched to a more conventional sequence-based version numbering. Version 4.0 introduced the #lang short-hand to specify the language that a module is written in. In addition, the revision introduced immutable pairs and lists, support for fine-grained parallelism, and a statically-typed dialect.

On June 7, 2010, PLT Scheme was renamed Racket.[15] The renaming coincided with the release of Version 5.0. Subsequently, the GUI backend was rewritten in Racket from C++ in Version 5.1 using native UI toolkits on all platforms.

Racket's core language includes macros, modules, lexical closures, tail calls, delimited continuations,[16] parameters (fluid variables), software contracts, green and OS threads, and more. Further extensions to the language are created with the powerful macro system. Unlike programming languages that lack macro systems, most language constructs in Racket are written on top of the base language using macros. These include a mixin class system,[9] a component (or module) system as expressive as ML's,[10] and pattern matching.

In addition, the language features the first contract system for a higher-order language.[17]

The most remarkable feature of these remains the macro system. It provides far more expressive power than Lisp's S-expression manipulation system,[18][19] Scheme 84's hygienic extend-syntax macros, or R5RS's syntax-rules. Indeed, it is fair to say that the macro system is a carefully tuned API for compiler extensions. Using this compiler API, programmers can add features and entire domain-specific languages in a manner that makes them completely indistinguishable from built-in language constructs.

Racket's compiler is a bytecode compiler that translates to an internal bytecode format that is run by the Racket virtual machine. On x86 and PPC platforms, the bytecode is further compiled using a JIT compiler at runtime.

Since 2004, the language has also shipped with PLaneT: a package manager that is integrated into the module system so that third-party libraries can be transparently imported and used. Additionally, PLaneT has a built-in versioning policy to prevent dependency hell.[20]

Apart from having a solid theoretical basis, Racket was designed to be used in production systems from the very beginning. Thus, the Racket distribution features an extensive library that covers systems and network programming, web development, a uniform interface to the underlying operating system, a dynamic foreign function interface, several flavours of regular expressions, lexer/parser generators, logic programming, and a complete GUI framework, to name a few.

The design decision to make Racket a practical language has implications beyond the library, too. Those include Racket's ability to generate standalone executables under Windows, Mac OS X and Unix, a profiler and debugger included in the IDE and a unit testing framework.

Such languages are not restricted to S-expression based syntax. In addition to conventional readtable-based syntax extensions, Racket's #lang makes it possible for a language programmer to define any arbitrary parser, for example, using the parser tools library.[27] See Racket logic programming for an example of such a language.

The language platform provides an IDE, a continuation-based web server, a graphical user interface, and other tools. Racket is also a viable scripting tool and can be used for scripting the Unix shell and includes libraries like all common scripting languages.

Running this program produces the output: 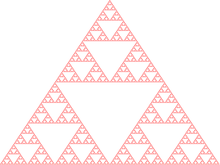 The result of this program, as shown in DrRacket

This program, taken from the Racket web page, draws a Sierpinski triangle, nested to depth 8.

Using the #lang directive, a source file can be written in different dialects of Racket. Here is an example of the factorial program in Typed Racket, a statically typed dialect of Racket: