This article discusses Myanmar Railways, originally known as Burma Railways. For the article on the World War II railway between Thailand and Burma, see Burma Railway.

The quality of the railroads is generally poor. Most remain in poor repair and are not passable during the monsoon season. The speeds of freight trains are heavily restricted on all existing links as a consequence of poor track and bridge conditions. The maximum speed for freight trains has been quoted as 24 km/h (15 mph), suggesting that commercial speeds on this section could be as low as 12–14 km/h (7.5–8.7 mph).[3]

MR has steadily increased the reach of its network in the last two decades, from nearly 3200 km in 1988 to 5403 km in 2010. MR is currently undertaking an ambitious expansion program that will add another 3,645 km (2,265 mi) to its network, including extensions to Myeik in the south, Kyaingtong in the east, Sittwe in the west.[4]

Rail transport was first introduced in Myanmar in May 1877 when Lower Burma was a British colony with the opening of the 163-mile (262 km) Yangon to Pyay line by The Irrawaddy Valley State Railway. In 1884, a new company, The Sittang Valley State Railway, opened a 166-mile (267 km) line along the Sittaung River from Yangon to the town of Taungoo via Bago. After the annexation of Upper Burma following the Third Anglo-Burmese War of 1885, the British extended the Taungoo line to Mandalay, the fallen capital, by 1889. Following the opening of this section, the Mu Valley State Railway was formed and construction began on a railway line from Sagaing to Myitkyina and connected Mandalay to Shwebo in 1891, to Wuntho in 1893,[5] to Katha in 1895, and to Myitkyina in 1898.

In 1896, before the completion of the line to Myitkyina, the three companies were combined into the Burma Railway Company as a state owned public undertaking.[6] The railway was known as Burma Railways between 1928 and 1989. The railway's reach to the Taninthayi coast first came in 1907 with the opening of the Bago-Mottama line. Passengers had to take a ferry over the Thanlwin River (Salween River) to Mawlamyaing. In 1942, the country had 3,313 km (2,059 mi) (route-km) of metre gauge track, but during World War II the Japanese removed about 480 km (298 mi). By the end of the conflict only 1,085 km (674 mi) (route-km) was operational, in four isolated sections.[7] They constructed the only international link the country has enjoyed, from Thanbyusayat Junction via Three Pagodas Pass to Thailand, the short-lived Death Railway.

1994 saw the start of construction of the initially isolated 160 km (99 mi) Ye-Dawei (Tavoy) railway, completed March 1998. This was later joined to the route north at Ye by the new 250 m (270 yd) road/rail bridge across the Ye River, opened November 2003. In April 2008, the tracks were extended across the 2.4 km (1.5 mi) Moulmein road/rail bridge, provision having been made in its design when it was opened a few years earlier. This allowed the long isolated section south to Ye and later Dawei (Tavoy) to receive trains from the north of the country. Also in 2008/9, the Ayeyawady Valley route was extended north along the west bank of the river towards Pakokku in the far north of the country. The 60 km (37 mi) Kyangin-Okshippin (Padang) section of Kyangin-Thayet railway was opened in March 2008 and the 56 km (35 mi) Okshippin-Kamma railway section was opened in March 2009.

MR operates 858 stations throughout the country. Yangon Central and Mandalay Central have been the twin anchors of the network. Recently, MR has extended rail service along the Taninthayi coast to Mon State and Tanintharyi Region with Mawlamyaing Station as the southern hub. The network generally runs north to south with branches to east and west. 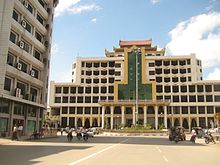 MR also operates a 45.9-kilometre (28.5 mi) 39-station loop system that connects Yangon's downtown, satellite towns and suburban areas. The railway runs 200 times and sells 150,000 tickets daily.[3][8] The loop, which takes about three hours to complete, is a way to see a cross section of life in Yangon for common people.

In 1999 MR had 201 diesel locomotives, and a further 88 were on order. Up to 1987 the main suppliers were Alsthom, Krupp and various Japanese companies, but since then orders have been placed with China owing to Myanmar's lack of access to hard currency. In 2004, MR had approximately 40 oil-fired steam locomotives, of which about a dozen were serviceable and saw occasional use on goods, local passenger and tourist trains. Up to three heavy repairs are performed per year using locally-manufactured parts.[7] Between 1988 and 2009, MR imported 96 diesel locomotives, 55 from China and 41 from India.[2] In December 2009, MR had a total of 319 locomotives. In October 2010, MR acquired 30 more locomotives from China.[4]

In 1999 MR had 868 coaches, with a further 463 on order. However many branch lines have only lightly built permanent way, and on these routes traffic is in the hands of a fleet of more than 50 light rail-buses built from lorry parts in MR's workshops. These are powered through their rubber-tired road wheels, and usually haul three small four-wheel coaches converted from goods wagons. Small turntables are used to turn the rail-buses at the termini.[7]

There were 5187 freight wagons in 1999, with 1188 due to be delivered. The majority of goods trains on lines without significant gradients run without any train brakes, as most of the serviceable wagons have been cannibalized and now lack vacuum hoses. Goods trains up to 600 tonnes are braked by the locomotive only, and operate at a maximum speed of 32 km/h. If the train is particularly heavy the wagons at the front will be fitted with hoses for the duration of the trip. On the steeply-graded ghat sections all wagons will be braked.[7]