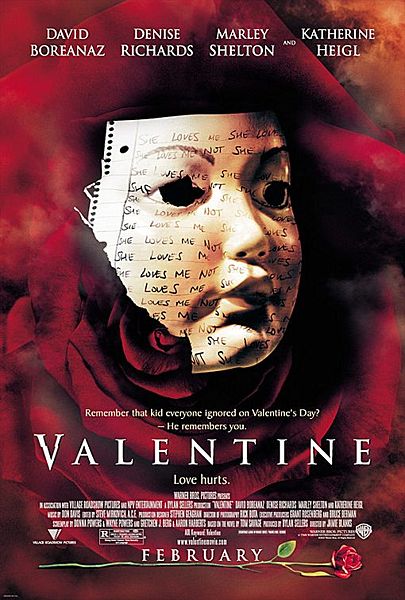 
"Valentine" is a 2001 directed by , director of "Urban Legend". It is a with a Valentine's Day twist. The film is loosely based on the novel of the same name by Tom Savage.

Jeremy Melton, a geeky student, has five big crushes at the Junior High School Valentine's Dance. As he attempts to ask each girl out, they all turn him down, making crude comments (therefore foreshadowing their deaths). After the fourth girl turns him down, Dorothy accepts his offer and starts making out with Jeremy until some jocks find them kissing. Dorothy denies having feelings for him and says that Jeremy attacked her. The jocks chase, humiliate, and beat Jeremy in front of an auditorium full of his peers.

13 years later, almost to the day, Shelley (Heigl), is now a pre-med student, having dinner with Jason (Adam Harrington), a self-absorbed player. She declines to return to his house as she needs to study for a final exam. She later receives a death threat in the form of a Valentine's Day card. She then returns to the morgue where an unknown assailant in a trenchcoat and cupid mask attacks her. She runs from him, hiding in a . He finds her and slits her throat. After her death, blood begins to drip from his nose through the mask.

The other four girls (Dorothy Wheeler, Paige Prescott, Lily Voight and Kate Davies) meet at Shelley's funeral. Leon Vaughn, A detective with the SFPD, introduces himself and suggests them to that it may have been someone she knew. At their apartment, as Lily (Cauffiel) as Paige (Richards) watch video dating tapes, a box of chocolates with a rose are delivered accompanied by a card signed "J.M." Lily takes a bite of a chocolate, finding s inside. Disgusted and horrified, the two of them try to figure out who J.M. is and Paige brings up Jeremy Melton, but they dismiss the idea.

In front of her apartment building, Kate has an awkward conversation with her estranged boyfriend Adam, a recovering alcoholic having difficulty staying sober. Later, in the shower, someone spooks her by turning off the water. She finds a cupid mask outside her apartment. At Lily's boyfriend's art show, Dorothy presents her new boyfriend Campbell to her friends. Max Raimi, Lily's sleazy artist boyfriend, tells the guests that the show has different sections for men and women. Lily is seen making out with her boyfriend and discovers he invited a gallery employee named Amy to join them in a kinky threesome. Disgusted, Lily says she has an early flight the next morning and storms off. She becomes separated from the others and the masked killer traps her. He shoots her with 3 arrows, causing her to fall off a balcony into a dumpster. The girls assume Lily is angry about the breakup and has left for a trip to L.A.

Detective Vaughn begins investigating and Campbell is named as a suspect. The girls tell him about Jeremy Melton, but he is unable to find any recent information in the computer. The only photo available is of young Jeremy with his face badly bruised from the dance. Between 13 years and possible reconstructive surgery, Jeremy could be any of the young men in the women's lives. Vaughn makes a pass at Paige, but is rejected. Dorothy finally reveals to Kate and Paige that Jeremy did not attack her at the dance.

At her house, Dorothy asks Campbell to fix the heater in the basement where the Cherub kills him with an axe. Later that night the Valentine's Day party at Dorothy's home is in full swing. Dorothy grows increasingly irritated seeing all the other guests seemingly in love while her significant other is missing in action. Thinking Campbell has stood her up, Dorothy snaps at Adam and excuse herself to her room where she pouts. Campbell's ex-girlfriend, Ruthie, unexpectedly arrives looking for him and argues with Dorothy. She is forcefully removed by Paige and Kate. Ruthie sneaks back in, finds the guest bedroom Campbell was staying in and steals the watch Dorothy bought for him as a Valentine's Day gift. While snooping around the house, Ruthie walks in on the killer dragging the body of Millie, the Wheelers' maid, into the billiard room. She strikes him with a cue stick and runs away, but is later thrown through a glass shower door and killed when her throat is pushed onto two big, sharp shard of glass. While Kate dances with Adam, Paige is expecting a man named Brian, whom she met while speed dating. Brian leads Paige upstairs hoping to get oral pleasure from her, though his expectations backfire as Paige ends up tying Brian to the bed and pours hot candle wax on his penis. Paige goes downstairs, and tells Kate that she's going to the hot tub to relax. Meanwhile, Kate catches Adam drinking and is disappointed he has fallen off the wagon.

Paige is in the hot tub sipping champagne when she receives a single rose. She gets out and tries to find who she assumes is an admirer. Thinking it is Brian trying to even the score after she dissed him, she becomes agitated. The killer surprises her from behind, attacking her, throwing her into the hot tub and closing the cover. As she struggles for air, he toys with her by using an electric drill to puncture holes in the hot tub's cover. After nicking her arm, he opens the cover and throws the drill into the tub, electrocuting her in a bloody, watery grave. The power is blown, putting a premature end to Dorothy's party. Kate and Dorothy start arguing that each other's boyfriends might have killed Shelley and Dorothy leaves in a huff. Kate goes outside and tries to call Detective Vaughn. As she waits for Vaughn to answer, she hears a cellphone ring in the distance. She follows the sound, finds the a discarded cell phone and a note she had written to Adam floating in a small pond. She reaches for the note and Vaughn's severed head bobs to the surface. Kate screams and runs back into the house calling for Paige and Dorothy. Inside the house, a drunken Adam descends the stairs into the ballroom and asks Kate to dance with him. Kate acquiesces out of fear and then knees him in the groin. She runs away and he chases her all over the house. She discovers Paige's and Ruthie's bodies. She runs into Dorothy's father's study, tries the phone, but with the phone line has been cut. She then sees a gun in a locked cabinet. She breaks the glass with a candlestick and takes the gun. She proceeds carefully in the billiard room and up the stairs into the ballroom, the killer comes lumbering out the door into her, causing them both to fall down the stairs. The air knocked out of her, Kate finally comes to and sits up. The killer sits bolt upright and is shot to death by Adam. Kate cries, apologizing to Adam for suspecting him. He then goes to examine the killer's body. He removes the cherub mask, revealing Dorothy. Kate assumes that Dorothy must have been killing out of jealousy, as she said in the argument she resented being 'the fat one' while the others were all thin and well-liked. The ordeal appears be a closed case, but while Kate embraces Adam, his nose bleeds, dripping on her cheek, revealing he was the killer/Jeremy all along.

Star David Boreanaz shot his scenes in less than two weeks. Katherine Heigl only had 3 days to shoot her scenes since she was already committed to TV's "Roswell" (1999). Heigl later revealed that, had she read the entire script, she would not have joined the movie.Fact|date=May 2008

Director Jamie Blanks later said in an interview, "Forgive me for [Valentine] . A lot of people give me grief for that, but we did our best." [ [http://cinefantastiqueonline.com/2007/11/14/storm-warning-qa-with-director-jamie-blanks » Storm Warning: Q&A with director Jamie Blanks ] ]

This project originally began at Artisan Entertainment with producer Dylan Sellers with a different director and cast members. Richard Kelly was originally offered the chance to direct, but turned the offer down. Hedy Burress originally auditioned for the role of Dorothy Wheeler, but that role was handed over to Capshaw. However, Blanks still wanted Burress to star in the film. They both looked at each other eye to eye and said "Ruthie," resulting in Burress having the role of Ruthie Walker. Jessica Cauffiel originally auditioned for Denise Richard's role of Paige. In the original cast, Tara Reid who also starred in Jamie Blanks's first film, "Urban Legend" (1998), was to play Dorothy Wheeler and Jennifer Love Hewitt was to play 'Paige Prescott'.

When Jeremy Melton asks each girl for a dance they each state a mean comment right after he asks them. This foreshadows each of their deaths.
*Shelley
**"In your dreams"
**Dies lying down in a sleeping position.
*Lily
**"Eww!"
**Receives maggots in a chocolate box and her body lands in a trash can.
*Paige
**"I'd rather be boiled alive"
**Gets thrown into a hot tub and is later electrocuted.
*Dorothy
**"He attacked me!", she pretends she got "attacked". She makes everyone believe that it was all Jeremy's fault.
**Jeremy makes everyone believe that all the killings were Dorothy's doing.
*Kate
**"Maybe later Jeremy"
**Jeremy lets Kate live since she is the only girl that did not insult him.