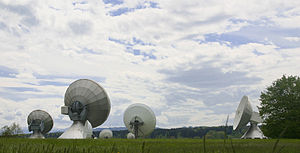 The Raisting Satellite Earth Station is the largest satellite communications facility in Germany.

A ground station, earth station, or earth terminal is a terrestrial terminal station designed for extraplanetary telecommunication with spacecraft, and/or reception of radio waves from an astronomical radio source. Ground stations are located either on the surface of the Earth, or within Earth's atmosphere.[1] Earth stations communicate with spacecraft by transmitting and receiving radio waves in the super high frequency or extremely high frequency bands (e.g., microwaves). When a ground station successfully transmits radio waves to a spacecraft (or vice versa), it establishes a telecommunications link.

Ground stations may occupy either a fixed or itinerant position. Article 1 § III of the ITU Radio Regulations describes various types of stationary and mobile ground stations, and their interrelationships.[2]

Teleports may provide various broadcasting services among other telecommunications functions,[5] such as uploading computer programs or issuing commands over an uplink to a satellite.[6]

In Federal Standard 1037C, the United States General Services Administration defined an earth terminal complex as the assemblage of equipment and facilities necessary to integrate an earth terminal (ground station) into a telecommunications network.[7][8] FS-1037C has since been subsumed by the ATIS Telecom Glossary, which is maintained by the Alliance for Telecommunications Industry Solutions, an international, business-oriented, non-governmental organization. The Telecommunications Industry Association also acknowledges this definition.

In addition to the body of standards defined by the ITU-R, each major satellite operator provides technical requirements and standards that ground stations must meet in order to communicate with the operator's satellites. For example, Intelsat publishes the Intelsat Earth Station Standards (IESS) which, among other things, classifies ground stations by the capabilities of their parabolic antennas, and pre-approves certain antenna models.[9] Eutelsat publishes similar standards and requirements, such as the Eutelsat Earth Station Standards (EESS).[10][11]