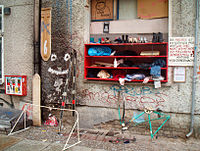 A Freebox in Berlin, Germany 2005, serving as a distribution center for free donated materials

Mutual aid is a term in organization theory used to signify a voluntary reciprocal exchange of resources and services for mutual benefit. Mutual aid is arguably as ancient as human culture; an intrinsic part of the small, communal societies universal to humanity's ancient past. From the dawn of humanity, until far beyond the invention of agriculture, humans were foragers, exchanging labor and resources for the benefit of groups and individuals alike.

As an intellectual abstraction, mutual aid was developed and advanced by mutualism or labor insurance systems and thus trade unions, and has been also used in cooperatives and other civil society movements.