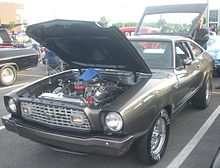 The first generation Mustangs grew in size; the 1973 model had become markedly larger than the original model. The pony car market segment saw decreasing sales in the early-1970s "with many buyers turning to lower-priced, fuel-efficient compacts like Ford's own Maverick - a huge first-year success itself."[1] The Mustang was growing to become an intermediate-sized sedan, "too big and alienated many in its customer base."[2] The allure of the original Mustang was its trim size and concept. The automakers in Detroit had "begun to receive vibrations from the only source it really listens to — new-car buyers... The message: Build smaller cars" as customers stopped buying and the inventory of unsold new cars climbed during the summer of 1973, and there were already positive market expectations for the new downsized Mustang.[3] Automakers were "scrambling" by December 1973 as "the trend toward smaller, less extravagant cars to surge ahead faster than anyone had expected."[4]

Subsequent to becoming president of Ford Motor Company on December 10, 1970,[5] Lee Iacocca ordered the development of a smaller Mustang for 1974 introduction. Initial plans called for a downsized Mustang based on the compact Ford Maverick, similar in size and power to the Falcon, the basis for original Mustang.[6] Those plans were later scrapped in favor of a smaller Mustang based on the subcompact Ford Pinto.[6] The final product was "less of a Pinto than the '64½ had been a Falcon."[7]

The new model would better compete with 2+2 import coupes such as the Toyota Celica, Datsun 240Z, and the Ford Capri — which itself was inspired by the original Mustang but built by Ford of Europe, and marketed since April 1970 in the U.S. by Mercury as a captive import.[1][8] The design featured rack and pinion steering and a separate engine sub-frame that decreased noise, vibration, and harshness.

According to Ford's Chief Engineer, Stuart M. Frey (younger brother of Donald N. Frey) Iacocca expected a high level of fit and finish, wanting the car to be "a little jewel".[9] The Mustang II production was 385,993 units the first year.[10] The big 1973 Mustang total reached 134,867,[2] but the 1974 version was within "10 percent of the original Mustang's 12-month production record of 418,812."[1] Over five years the Mustang II recorded four of the ten top model year Mustang sales. A 2009 report confirmed Iacocca's vision for the 1974–1978 Mustang, saying it "was the right car at the right time, selling more than 1 million units in four years."[11]

The marketplace adjusted to the oil embargo, increasing insurance rates, United States emissions and safety standards, and downturns in the economy, and waning consumer demand in the pony car segment. GM had considered discontinuing the Camaro and Firebird after 1972, and in 1974 Chrysler discontinued the Barracuda and Dodge Challenger, American Motors discontinued the Javelin, and lighter, more economical imported cars became increasingly popular — "in effect, filling the segment the Mustang had created, then abandoned."[12]

In 1974, the Mustang II returned to a size closer to the 1964 model, ultimately winning the Motor Trend Car of the Year.

"Just as the original Mustang had been based on mundane Falcon components, Iacocca and company decided to use some of the parts from the new-for-1971 subcompact Ford Pinto as the basis for the Mustang."[12] Though the Mustang II carried handling and engineering improvements, its performance was comparable to contemporary Detroit products.

Competitors included the Toyota Celica and the Datsun 240Z. Sales of such imports attracted fewer than 100,000 customers in 1965, but by 1972 demand had increased; therefore, the "Mustang II's mission was to capture a big slice of this sizable new pie."[1]

Available as a coupe or three-door hatchback, the new car's base engine was a 140 cu in (2.3 L) SOHC I4, the first fully metric-dimensioned engine built in the U.S.[9][13] A 171 cu in (2.8 L) V6 was the sole optional engine. Mustang II packages ranged from the base "Hardtop," 2+2 hatchback, a "Ghia" luxury group with vinyl roof, and a top of the line V6-powered Mach 1. A V8 engine option would not be available in a Mustang for the only time for the 1974 model year (except in Mexico).

"The Mustang II’s attractive all-new styling was influenced by coachbuilder Ghia of Italy, which had recently been acquired by Ford. It carried through the long-hood, short-deck theme of the original, and as Iacocca requested it came as a notchback and hatch-equipped fastback."[12] Mustangs lost their pillarless body style; all models now had fixed rear windows and a chrome covered "B" pillar that resembled a hardtop, but in fact was a coupe. In Mustang advertisements, however, Ford promoted the notchback coupe as a "Hardtop".

"With oil crisis memories starting to fade" Ford needed a V8 in the Mustang II to return "performance to respectable levels."[12] The engine bay re-engineered to accept the 302 cu in (4.9 L) V8 option for the 1975 model year, with revised hood and header panel. The engine was limited to a two-barrel carburetor and "net" 140 hp (104 kW). Since Ford's Mexican division never lost the V8, they assisted in the modifications.[citation needed]

The Mustang II achieved record sales for 1975, making it the 9th best selling Mustang of all time, with 199,199 sold.[citation needed]

The 1977 model year introduced a "Sports Appearance Group" for the Ghia model that was color matched to either black or tan paint, as well as several minor styling changes and color options for the Cobra II. Also new was a T-top option for the fastback featuring twin removable tinted glass panels.

In 1978, the "King Cobra" became available. This was a limited edition version with 4,313 units produced.[16] It featured a deep air-dam, stripes, and a "Pontiac Trans-Am style" cobra snake decal on the hood. The King Cobra was available only with the V8 to help bolster the car's performance image.

On the momentum of the Mustang II's successful sales, a totally new Mustang was introduced for the 1979 model year.

The Mustang II was named Motor Trend's Car of the Year, in 1974, the only Mustang to achieve that honor until 1994. Nevertheless, there were also mixed contemporary reviews including Consumer Reports reporting that "there are better subcompacts on the market than the Mustang II" and recommended the AMC Gremlin as a car that was at least as good, and in some respects superior, in terms of seating, noise level, normal and emergency handling, and acceleration;[17] and Road & Track was of the opinion that the Ford was neither fast nor particularly good handling.[18]

Consumer reaction to the Mustang II was enthusiastic with a combined total production of the 1974–1978 models exceeding 1.1 million. "As the smallest, lightest Mustang since the original, it was a fresh start for Ford's pony car and a refreshing return to rationality. And it couldn't have been better timed, introduced just two months before the first "Energy Crisis" upended America. People came in droves to see the Mustang II—and to buy."[1] "Not only did gasoline prices spike up, but its very supply looked to be in jeopardy. Economy immediately became a hot item, and this helped boost the smaller Mustang’s first calendar year sales to 385,993."[12]

According to automotive historian Patrick Foster, "Ford executives decided to call the car 'Mustang II', since it was a new type of pony car designed for an era of high gas prices and fuel shortages".[19] "Many people have never warmed up to the Mustang II, some even complaining it reminds them of the Pinto. But in its day, the public and the press sang praises for the little Mustang II. After all, a car with excellent fuel efficiency, sporty looks and a low price tag will always find acceptance. Mustang II was a success, simply because it was the right car at the right time."[19]

Writers of the past few years tend to ignore the huge successes of the Mustang II and point out flaws by today's standards. Opinions include noting in 2003 that "[i]f there were any steps forward in technology with the Pinto chassis, it was that it had a rack-and-pinion steering gear rather than the Falcon's recirculating ball, and front disc brakes were standard," Edmunds Inside Line wrote of the Mustang II: "It was too small, underpowered, handled poorly, terribly put together, ill-proportioned, chintzy in its details and altogether subpar.[20]

Writers of today ignore the rave reviews of 1974–1976 models, and one even describes the Mustang II as "lamentable." The New York Times said in 2006 that defective steering, together with a fuel tank of the same design as in the Pinto, a car "forever infamous for exploding when struck in the rear," caused owners an anxiety that was "heightened by the fact that some Mustang IIs had Firestone 500 tires, notorious in the 70's for widespread failures." It continued: "Ford, not content to drag the revered Mustang name through the mud...added badges from Ghia, the venerable Italian studio that it had bought, to versions of the Mustang II with partial vinyl roofs and tacky opera windows."[18] According to Edmunds Inside Line the 1978 King Cobra "wasn't much more than a Cobra II with revised graphics and the hood scoop turned around backward..." This model was "visually about as nutty a Mustang as has ever been built" but "[m]ysteriously, production climbed to 192,410 units."[20]

A 1995 book on the history of the Mustang refers to the introduction of "a lukewarm optional 302 V8 in 1975" and says that "the token revival of the Cobra name—appearing as the taped-and-striped Cobra II—the following year did little to stem the tide as customers grew less enchanted with the Mustang II’s cramped quarters and weak performance." There was "a steady slide in 1976 and '77." Despite the 25-percent rise in sales for 1978, "not even the high-profile Cobra with its flashy decals and snazzy spats and spoilers could save the day for the second-generation Mustang."[21]

A review by Edmunds concluded: "As much as the Mustang II is despised today, Ford appreciated its success back then."[20] "The Mustang II kept the pony car spirit alive in the face of those very rough times ... no small achievement and reason enough to respect Iacocca's little jewel."[22]

"Many Mustang enthusiasts disdained the Mustang II as an aberration, not a “real” Mustang. It was, however, a product of its time, and many find it a desirable collectible today."[12]