A cover story by TIME on February 22, 1937 called the last Nizam as the wealthiest man in the world

Hyderabadi Muslims are a community of Urdu-speaking Muslims from the area that used to be the princely state of Hyderabad, India. With its origins in the Muslim Bahmani Sultanate and then Deccan sultanates, the culture became defined in the latter half of the reign of the Nizam dynasty in Hyderabad. The culture exists today in Hyderabad and among the Hyderabadi Muslim diaspora around the world, in particular, Pakistan, Saudi Arabia, the Arab states of the Persian Gulf, USA, Canada and the United Kingdom. 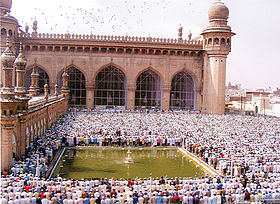 The Deccan plateau acted as a bulwark sheltering South India from the invasions and political turmoil that affected North India. This allowed the Muslim-ruled state of Hyderabad to develop a distinctive culture during the Qutb Shahi dynasty, Mughal Aurangzeb and later the Asaf Jahi dynasty of the Nizams.

According to Time, the seventh Nizam was the richest man in the world during the late 1940s.

The Nizam was the Muslim ruler of the vast princely Hyderabad State. The capital city of Hyderabad was primarily Urdu-speaking Muslim until the Incorporation of Hyderabad into India and the subsequent rise to dominance of Telugu-speaking people of Andhra. The state's economy was agrarian, and Hyderabad was primarily a government and administrative hub, run mostly (but far from exclusively) by Muslims. The aristocracy, jagirdars and deshmukhs (wealthy landowners), and even minor government officials, could afford to hire servants, usually also Muslims, in a social order similar to the class system of Victorian England. The Nizam allied himself with the British early on, with ensuing political stability. The Muslim upper and middle classes were free to concentrate on a care-free and leisurely lifestyle involving clothes, jewelry, food, music, literary arts, and other indulgences, little of which trickled down to the servant class, known as naukar (a word originally used for the Mughal Emperor Babur's closest feudal retainers).

The relative isolation of Hyderabad until India's invasion of 1948, its distinctive dialect of Urdu and the strong web of interconnecting family relationships that still characterizes Hyderabadi Muslims, sometimes leads to charges of parochialism from other Indian Muslim communities, but it also ensures a Hyderabadi Muslim identity endures among the Indian diaspora.

A replica of the Charminar built by Hyderabadi Muslims in Bahadurabad, Karachi, Pakistan

The largest concentration of Hyderabadi Muslims is in the city of Hyderabad, India. After the Partition of India and the Incorporation of Hyderabad by India, the Muslims of the state lost their privileged status, so significant numbers chose to migrate to other countries such as Pakistan, the Arab Gulf states, the US, UK, Canada and Australia.[1][2]

Because of its status as the richest of the princely states in India and being ruled by a Muslim leader, Hyderabad State attracted Muslims from all around India and even other countries in search of work. Many Muslim poets, musicians, scholars, soldiers and administrators from far and wide sought employment in the Nizam's court, the Hyderabad Civil Service, army or educational institutions. Among those who spent a significant amount of time in Hyderabad were the famous poet Josh Malihabadi, Fani Badayuni, religious scholar Shibli Nomani and court photographer Lala Deen Dayal among others

A section of Hyderabadi Muslims are of Hadhrami Arab origin, who came to serve in the Nizam's military. They are known as Chaush and mostly reside in the Barkas neighbourhood of Hyderabad. There are also some Siddis who are of African descent.[3][4]

Some Hyderabadi Muslims have organized themselves politically along religious lines. The most prominent example of this is the All India Majlis-e-Ittehadul Muslimeen, currently led by Asaduddin Owaisi. The party dominates the politics scene in Hyderabad's Old City, and consistently wins seats for the Lok Sabha (Lower House of Indian Parliament) and the Andhra Pradesh State Assembly. The party claims to represent the interests of Muslims by campaigning for greater protection of minority rights. A rival breakaway faction of the AIMIM is the Majlis Bachao Tehreek that also claims to represent the interests of Muslims in Hyderabad.

However, many Hyderabadi Muslims have been strong supporters of secular progressive movements, such as the famous Urdu poets Makhdoom Mohiuddin and Sulaiman Areeb, and Hassan Nasir who participated in the Telangana Rebellion against the rule of the Nizam. Hyderabadi Muslims were also at the forefront of the formation of the Comrades Association in 1939, one of the first Communist organizations in Hyderabad which struggled against the Nizam. Other secular members of the Hyderabad Muslim community include Shoaibullah Khan, the editor of the Urdu daily Imroz that was critical of the Razakars and urged Hyderabad's integration with India (he was stabbed to death). The story of a poor Muslim peasant named Bandagi who was killed while struggling against the landlord was immortalised in the popular drama Ma Bhoomi about the Telangana Rebellion. 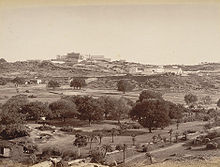 A distant view of the Falaknuma Palace

One of the most identifiable markers of Hyderabadi Muslim culture is the local dialect of Urdu. It is distinct by its mixture of vocabulary from Turkish, Persian and Arabic, as well in some vocabulary from Telugu and Marathi that are not found in the standard dialect of Urdu. In terms of pronunciation, the easiest way to recognize a Hyderabadi Muslim is they used to say "nakko"(no) where as in standard urdu its "nahi" for (no) and "hau"(yes) where as in standard urdu its "haa" for (yes). The most distinctive aspect about the city of Hyderabad is the fact that the local Hindu population also speaks Hyderabadi Urdu as their native language unlike their counterparts in the rest of the state regions of Andhra Pradesh (Andhra and Rayalseema) who speak Telugu but pronounces "qaf" as "khaf".

The other very important marker is the meethi boli (or, sweet and cultured speech) of the natives.Tameez, tahzeeb and Akhlaq (etiquette, custom, and tradition) are considered very Important and normally people are very well behaved and visitors are treated well with lot of Mahmaan nawaazi (hospitality).

Among the famous Hyderabadi Urdu poets are Amjad Hyderabadi, Dagh Dehalvi, Molana Mufti Mir Ashraf Ali, Safi Aurangabadi Makhdoom Mohiuddin, Sulaiman Areeb and khawja Shouq. Others poets who made Hyderabad their home for a significant amount of time include Josh Malihabadi and Fani Badayuni. Although not a Muslim himself, Maharaja Sir Kishen Pershad was steeped in Hyderabadi Muslim culture and wrote Urdu poetry under the pen name of "Shad" (Urdu: شاد).

Chai and Paan are served after food.

The Khada Dupatta or Khara Dupatta(uncut veil) is an outfit composed of a kurta (tunic), chooridaar (ruched pair of pants), and 6 yard dupatta (veil) and is traditionally worn by Hyderabad brides. Sometimes the kurta is sleeveless and worn over a koti resembling a choli. The bride also wears a matching ghoonghat (veil) over her head. The accompanying jewellery is:

The Sherwani is the traditional men's garb of Hyderabad. It is a coat-like tunic with a tight-fitting collar (fastened with hooks), close-fitting in the upper torso and flaring somewhat in its lower half. It usually has six or seven buttons, often removable ones made from gold sovereigns for special occasions. The material is usually silk or wool. A groom may use gold brocade for his wedding sherwani, but otherwise good taste dictates understated colors, albeit with rich and textured fabrics. The sherwani is usually worn over a silk or cotton kurta (long shirt) and pyjamas (baggy pants with a drawstring at the waist).

The sherwani is closely associated with Hyderabad, although it has spread since to the rest of India and to Pakistan. Prime Minister Jawaharlal Nehru adapted its design and turned it into his trademark Nehru Jacket, further popularizing the garment.

The majority of Hyderabadi Muslims are Sunni. Sunni Muslims mostly follow the Hanafi school of Islamic Jurisprudence, although the Chaush community follows the Shafi'i school of thought and mainly reside in areas close to Barkas, the former Military Barracks of the Nizam, an area where the residents are mainly of Hadhrami Arab descent from Yemen. Islam in Hyderabad, with historical patronizing by the rulers, has a strong Sufi influence, the Tablighi Jamaat has also been active since at least the 1960s. Salafis and Mahdavis also exist in small pockets. Jamaat-e-Islami Hind, along with its student wing Students Islamic Organisation of India is active, especially in the Mehdipatnam region where its large main mosque, Masjid e Azizia, is located[8] although not as popular as other religious movements.

Religious knowledge and its propagation flourished under the Nizam with institutions like the world famous Jamia Nizamia (Jami'ah Nizamiyyah) of Hyderabad. The largest Mosque of Hyderabad, the Makkah Masjid gathers congregations of two hundred thousand and more on special occasions of Eid prayers and especially of Jumu'at-al Wida' ( the last Friday of Ramadan )

Tennis and other sports