Video of the Museum of Science (Boston)'s coil

The singing Tesla coil is a form of plasma speaker. It is a variation of a solid state Tesla coil that has been modified to produce musical tones by modulating its spark output. The resulting pitch is a low fidelity square wave like sound reminiscent of an analog synthesizer. 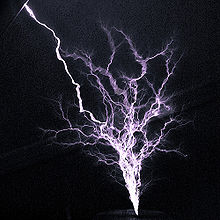 The term, "singing Tesla coil" was coined by David Nunez, the coordinator of the Austin, Texas chapter of Dorkbot, while describing a musical Tesla coil presentation by Joe DiPrima and Oliver Greaves during DorkBot's 2007 SXSW event. The term was then made popular by a CNET article describing the event.[1]

Though they had been been doing public performances with the technology since March 2006.[2] Shortly after that, DiPrima named their performance group "ArcAttack" and became the first musical group to ever use this technology in live performance.[3]

While early versions of musical Tesla coils generally used Zero crossing threshold detector as a method of producing music through their spark output, Scott Coppersmith was the first person to design a complete MIDI based Tesla coil system.[4]

Now, MIDI is the most common method of music production. It works by means of a microcontroller that is programmed to interpret MIDI data, and output a corresponding Pulse-width modulation (PWM) signal. This PWM signal is coupled to the Tesla coil through a fiber optic cable, and controls when the Tesla coil turns on and off.

Steve Ward demonstrated a singing Tesla coil at the DucKon 16, science fiction convention on June 9, 2007, at which time it was suggested to him to nickname the device, the "Zeusaphone". It is a play on the name of the Sousaphone, giving homage instead to Zeus, Greek god of lightning.

A singing Tesla coil was used in Björk's 2011 performance piece Biophilia, during a song called "Thunderbolt".