Music of Kashmir, Jammu and Ladakh

Music of Kashmir, Jammu and Ladakh

Kashmiri music (Urdu: جموں اور کشمیر کے سنگیت) reflects the rich musical heritage and cultural legacy of the Jammu & Kashmir region in India. Traditionally the music composed by ethnic Kashmiris has a wide range of musical influences in composition. Due to Kashmir's close proximity to Central Asia, Eastern Asia and Southern Asia, a unique blend of music has evolved encompassing the music of the three regions. But, overall, Kashmiri Valley music is closer to Central Asian music, using traditional Central Asian instruments and musical scales,[1] while music from Jammu is similar to that of North India and Ladakhi music is similar to the music of Tibet.[2]

Chakri is one of the most popular types of folk music played in Jammu & Kashmir. Chakri is played with musical instruments like the harmonium, the rubab, the sarangi and the nout. Chakri was also used to tell stories like fairy tales or famous love stories such as Yousuf-Zulaikha, Laila-Majnun, etc. Chakri ends with the rouf, though rouf is a dance form but few ending notes of Chakri which are played differently and on fast notes is also called Rouf.[3]It is a very important part of the Henna Night during weddings for Kashmiri Pandits and the Kashmiri Muslims.

Rouf is a traditional dance form usually performed by girls on certain important occasions like Eid, marriage and other functions. Rouf includes dancing and singing simultaneously. No musical instrument is required for this. Girls arrange themselves in two or three rows, each row has four to six girls. Each row of girls then moves one step forward and then back in swaying motion while singing the Rouf song or Wanwun. Rouf is usually called wanwun when performed at marriages.[4]

Ladishah is one of the most important parts of the Kashmiri music tradition. Ladishah is a sarcastic form of singing. The songs are sung resonating the present social and political conditions and are utterly humorous. The singers move from village to village performing generally during the harvesting period. The songs are composed on the spot on issues relating to that village, be it cultural, social or political. The songs reflect the truth and that sometimes makes the song a bit hard to digest, but they are totally entertaining.[5][6][7]

Sufiana Kalam is the classical music of Kashmir, which uses its own ragas (known as maqam), and is accompanied by a hundred-stringed instrument called the santoor, along with the Kashmiri saz, wasool, tabala and sitar. Sufiana Kalam has been popular in Kashmir since arriving from Iran in the 15th century and has been the music of choice for Kashmiri Sufi mystics. The dance based on the sofiyiana kalam is the hafiz nagma.[8] 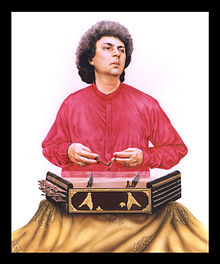 Music in Kashmir performed by Hindus is mainly influenced by Indian classical music, using instruments such as the sitar. Sarangadeva, who wrote the famous Sangeet Ratnakara, was a Kashmiri. Music and musical instruments find mention in the earliest texts like the Nilmatapurana and Rajatarangini by Kalhana. The very fact that it was a Kashmiri, Abhinavagupta (the great philosopher), who wrote a commentary called Abhinavabharati on Bharata's Natyashatra shows how much importance was given to music in the ancient times. The most popular folk instrument is the santoor (Shat-tantri-veena), a hundred string percussion instrument which is played by the goddess Sharada (the goddess of learning and art in ancient Kashmir). Henzae is a music form sung by Kashmiri Pandits on religious and cultural festivals.[citation needed] A very notable santoor player from Kashmir includes the maestro Pt. Bhajan Sopori, who has also given Santoor recitals in Iran, from where the Santoor has originated. It must be noted however that the Kashmiri Santoor looks and sounds very different from the original Persian Santoor and Pt. Bhajan Sopori's family was key in adapting the Persian Santoor and creating the Kashmiri Santoor thereafter over several generations. As of today, the Santoor is a very important part of Kashmiri Music.

One of the main features of a Ladakh marriage is the recitation of lengthy narratives by singers in unusual costumes. Popular dances in Ladakh include the Khatok Chenmo (only when headed by an aristocratic family member), Kompa Tsum-tsak (meaning three successive steps), Jabro (dance steps from western Ladakh), Chaams (sacred dance by lamas), Chabs-Skyan Tses (dance carrying a pot), Raldi Tses (swordsmanship dance) and alley yaato (Zanskari Dance and Song Sequence).

Traditional music includes the instruments surna and daman (shenai and drum). The music of Ladakhi Buddhist monastic festivals, like Tibetan music, often involves religious chanting in Tibetan or Sanskrit as an integral part of the religion. These chants are complex, often recitations of sacred texts or in celebration of various festivals. Yang chanting, performed without metrical timing, is accompanied by resonant drums and low, sustained syllables. Religious mask dances are an important part of Ladakh's cultural life. Hemis monastery, a leading centre of the Drukpa tradition of Buddhism, holds an annual masked dance festival, as do all major Ladakhi monasteries. The dances typically narrate a story of the fight between good and evil, ending with the eventual victory of the former.[9] Weaving is an important part of traditional life in eastern Ladakh. Both women and men weave, on different looms.[10] Typical costumes include gonchas of velvet, elaborately embroidered waistcoats and boots and hats. The Ladakh Festival is held every year from September 1 to 15. Performers adorned with gold and silver ornaments and turquoise headgear throng the streets. Monks wear colourful masks and dance to the rhythm of cymbals, flutes and trumpets. The yak, lion and Tashispa dances depict the many legends and fables of Ladakh. Buddhist monasteries sporting prayer flags, display of thankas, archery competitions, a mock marriage and horse-polo are the some highlights of this festival.[11]