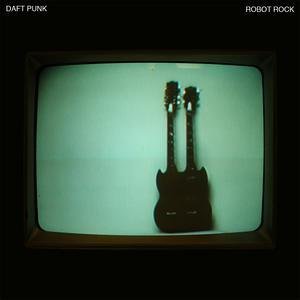 
"Robot Rock" is the first single from 's 2005 album "". Whilst the single reached a moderately high chart position, many critics found the song overly repetitive. The words "robot rock" are the only lyrics in the song. It prominently features sampled portions of "Release the Beast" performed by Breakwater.

"Robot Rock" is based around a sample from the Breakwater song "Release the Beast", which features a played on an patch on an . In addition, Daft Punk incorporated other elements of the "Release the Beast" into the production, including percussion and s on an . A vocal phrase featuring the title of Daft Punk's single was also added to the recording. The Breakwater sample is credited on the single's sleeve and on the liner notes of the parent "" album. This was not the first time Daft Punk have sampled a song to create a new recording, as "" would be a noted example, but it is the first to introduce very few other elements.

The Breakwater sample is absent from the "Maximum Overdrive" remix of "Robot Rock", which consists of the song's other elements for a duration of nearly six minutes. A music video for this remix has been shot and included on the Daft Punk "" compilation CD/DVD.

The for "Robot Rock" consists of and of Daft Punk performing the song on a stage decorated with several televisions and lights, and filmed in a somewhat aged look. This is the first video to feature the duo as themselves exclusively. This pattern continues for the rest of the "Human After All" videos except for "", where they only make a . Bangalter plays the shown on the "Robot Rock" single cover while de Homem-Christo performs on a set of drums.

Though it reached moderate positions in UK and U.S. dance charts, the single encountered criticism for its general structure. A review in expressed that the track "does nothing, means nothing and goes nowhere for an unconscionably long time."