Music Center Incorporated (MCI) is the former name of a United States manufacturer of professional audio equipment that operated from 1955 till 1982 when it was acquired by the Sony Corporation. The company is credited with a number of world firsts: commercialising the 24-track multi-track recorder, the tape AutoLocator and in-line mixing console.[1]

MCI's reputation was built on technical innovation and its budget priced systems that were especially popular with independent music studios during the 1970s. At the height of MCI's success, one third of record albums on the Billboard 100 at the time were alleged recorded on MCI branded mixing consoles.[2]

During the late 1950s Grover 'Jeep' Harned, the founder of MCI, owned and operated a small record and stereo servicing outlet in Ft. Lauderdale, Florida. He also built some custom audio equipment at the request of customers. Mack Emerman, the owner of the nearby Criteria Recording Studios asked Harned to build some electronics for some Ampex tape recorders and mixing consoles.

"I got into the tape recorder business in an interesting way. I had built a console for Sidney Nation of King Records in Cincinnati and he, Mack Emmerman, and Bob Richardson had a bunch of Ampex 350 tape recorder with transports that still ran well, but electronics that were on the verge of quitting completely. So in 1968 Sid, Bob and Mack got together and hired me to design and build some new "solid state" electronics for the old transports. My electronics proved to be quieter, had lower distortion, and they didn't have the 'Bias Rocks' common to so many earlier designs. I filled this order for 100 units and I thought that would be the end of it, but when the word got around the industry that there was this guy in Florida building these 'solid state' electronics, a lot more people became interested in them"

In 1968 Tom Hidley, then manager of TTG Recording Studios in Hollywood, asked Harned to build a 24-track recorder. Hidley had recently modified an Ampex 300 tape machine to accommodate 2-inch open reel magnetic tape and required a multitrack recorder.[6] Harned delivered a custom built 24-track unit — a modified Ampex 300 — which went into service later that year. This unit became the prototype for a new MCI product line, the JH-24 tape recorder[7]

In the late 1960s MCI established a network of dealerships across the United States to sell its own line of preamps, recording electronics and tape recorders.[8] Studio Supply, one of these dealerships was operated by audio engineer Dave Harrison. He pitched a concept for an in-line mixing console to MCO that would allow an engineer to switch quickly and easily between monitoring audio input and track mixdown modes. In 1972 MCI JH-400 series console, the world's first commercial in-line console.[9] Unlike the split mixing console design, the in-line design the 400s series consoles were standardized production' models, that offered a choice of user options and incorporated Harris 911 IC op-amps, at a lower cost than its competitors.[10]

With the release in 1975 of its JH-500 series mixing consoles, MCI pioneered Voltage Controlled Automation (VCA). Console automation, a necessity at a time when the number of mixing channels grew and there were more faders than two hands could manage. With VCA an engineer could adjust multiple channels simultaneously (in groups) and doing so with less 'scratchy' audio by moving a fader. VCA technology cost a fraction of the price of Moving Fader Automation (the flying fader), the competing standard of the time.

The MCI tape AutoLocator, another innovation, was similar in design to a remote control though it had advanced functions such as storing a number of presets to recall a particular position of a given recording track. This proved to be a great time saver during the overdubbing process. The MCI JH-45 Autolock enabled a person with average technical experience to quickly configure two JH-24 multi-track records for synchronized recording. Other companies incorporated these features into their products but in many cases, MCI innovated first.

"Our competitors literally took apart our AutoLocator product but couldn't see how we could possibly price it. It had 50 Integrated Circuit chips, it was like a small computer. They couldn't make the same equipment without selling it for twice our price. "It took Ampex and 3M (many) years to realise it was our loss-leader. Every time we shipped an AutoLocator out, $700 or $800 was going out the door but recording engineers wanted it. And it worked, they are ordering other MCI products". 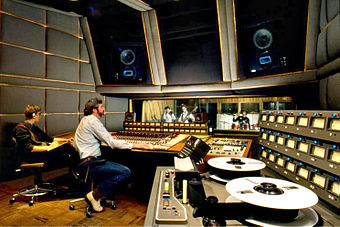 During the 1970s the MCI brand was tied to the fortunes of the Criteria Studios. Rock musician Eric Clapton recorded his 1974 album '461 Ocean Boulevard' at Criteria, which had served as the testbed for MCI's new products since the early 1960s. The Eagles recorded their best selling singles at Criteria, and likewise the Bee Gees chose Criteria to record 'Saturday Night Fever, the biggest selling album of the 70s.

MCI branded equipment was renowned for its high build quality and features that generally gave it a competitive edge over more expensive brands such as 3M and Studer. These features included Autolocator, constant tension reel servos, wrap and azimuth adjustable heads, long wearing ceramic capstans and one button punch-in and punch-out. MCI marketing appeal coincided with the emergence in the mid 70s of 'independent music studio' operators. Half-page press adverts promoting MCI's winning connections were placed in industry magazines such as Record Engineer/Producer (RE/P). Aspiring studio operators fell into either of two categories: those with very deep pockets spent $US45,000 on a high-end 3M or Studer gear, while the remainder could spent as a little as $25,000-30,000 on a comparable MCI setup.

"Today, we build our own motors, make our own faders, printed circuit boards, have our own paint shop, do our own silk screening. . . in short we have almost completely integrated manufacturing capacity for professional audio equipment".

By the late 1970s MCI's annual revenue stood at an estimated $20M and its products achieved a 36% market-share in the US domestic market and 45% internationally. The company had a workforce of 250 staff and dealerships in more than 30 countries.[11] At the height of MCI's success in 1979, allegedly one third of the record albums in the Billboard 100 were recorded on MCI branded mixing consoles.[12] Later still AC/DC's "Back in Black" and many Queen, Led Zeppelin, and other rock albums were recorded on the Harrison-designed MCI consoles.[13]

In 1977, the 2-inch analog multitrack format was well-entrenched in high-end studios, with a wide selection of competing product offerings from companies like Ampex, and MCI amongsts others. The year was the introduction by the 3M Corporation the world's first commercial quality 32-track digital recorder. MCI unveiled a prototype 3-inch, 32-track analog deck in 1978, which showed Harned's willingness to try new ideas though it never went into production. Later that year American artist Ry Cooder released 'Bop till you drop', the world's first digitally mastered album.

In 1980, the Sony Corporation and Philips Consumer Electronics (Philips) published the Red Book for the Compact Disc, an industry standard of consumer grade digital media. Many recording studios retooled to support end to end digital production. MCI was one of several major equipment manufacturers that backed the Sony Corporation’s new Digital Audio Stationary Head digital recording standard. In the early 1980s Sony wanted to extend its business operations into the US manufacturing sector and approached Harned with a buyout offer. The Sony Professional Products Division was established in Fort Lauderdale specifically to accommodate this acquisition.[14]

The MCI JH-24 Series of Multitrack Tape Recorders encompasses a number of products, culminating in the JH-24 designation. The different models and revisions are commonly confused. JH-24 was one of the industry standards for 24-track analog audio recording, and were installed in many audio recording studios starting in the early 70s. The JH-24 is still in use today among recording engineers and recording artists who prefer the warmer and some say superior recording quality of analog, and need 24 recording tracks at their disposal.

The JH-416 introduced the "In Line Monitoring" configuration that became the standard for many future console designs from both MCI and other manufacturers. In 1974 the product was redesigned as the JH-428, a 24-Track Recording Console.

This model was first produced in 1975 and became the preferred recording console for Atlantic Records in New York and Criteria Studio in Miami. In time the model range included A, B, C, & D versions offering 28, 32, 36, 38, 42, & 56 channel mainframe configurations. Metering was available as either VU or Light Meters.[15] The 500 Series was highly configurable and was available with a wide array of customization options. The JH-556 was the first recording console designed specifically to cater for dual 24 track recording. The now famous Tom Dowd, who was the main engineer for Atlantic Records, was attracted to the southern Florida weather and began working with many artists at Criteria Records including the Young Rascals, Eric Clapton, The Allman Brothers (and many other Southern rockers) and The Bee Gees.

The MCI JH600 console is still sought after as a great sounding Analog Recording Console, and many studios in the '80s used the JH600 Console in combination with the JH24 Tape recorder and the JH110B 2 track Tape recorder, making for an "All MCI" studio.