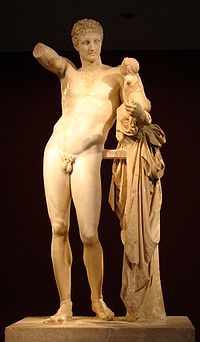 The Archaeological Museum of Olympia is one of the great museums of Greece in Olympia, of the Elis Prefecture, and houses artifacts found in the archaeological site of Ancient Olympia.

History of the museum

The museum was built opposite the excavation site in a valley northwest of the Kronion hill. Designed by Patroklos Karantinos,[1] it was officially opened in 1982. One of the best known exhibits is the Nike of Paeonius, which is featured on the medals awarded during the 2004 Summer Olympics in Athens.

The statue of Apollo from the west pediment of the Temple of Zeus was depicted on the obverse of the Greek 1000 drachmas banknote of 1987-2001.[2]