Musa Çelebi
The title of this article contains the character Ç. Where it is unavailable or not desired, the name may be represented as Musa Celebi. 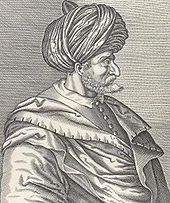 Musa Çelebi (?-1413) was an Ottoman prince (Turkish: şehzade) and a co-ruler of the empire for three years during Ottoman Interregnum. (Çelebi is an honorific title meaning gentleman)

Musa was one of the sons of Beyazıt I, the Ottoman sultan. There is no consensus of his mother's origin. She was either the daughter of bey of Germiyanids or a Byzantine princess. (Germiyan was the name of an independent Turkish principality in center-west portion of Anatolia. ) After the battle of Ankara in which Ottoman sultan Bayazit was defeated by Temur, Musa as well as Bayazit himself was taken as a prisoner of war. However, after Bayazit's death, he was released. He returned to Ottoman Empire which was in turmoil and tried to access to throne in Bursa, the Anatolian capital of the empire in 1403. But there were three other claimants to throne, İsa Çelebi in Balıkesir, Mehmet Çelebi in Amasya both in Anatolia and most important, Süleyman Çelebi in Edirne the European capital.

İsa defeated Musa and captured Bursa. Musa took refuge in Germiyan territory, where he waited for a suitable moment to try again. In 1406, Mehmet who had defeated İsa became the sole ruler of Anatolian portion of the empire. But he was no match for Süleyman of the European portion. So Mehmet and Musa met in Kırşehir, Central Anatolia and formed an alliance against Süleyman. Most of the beyliks in Anatolia also supported this alliance. According to plot, Musa was transferred to European part over Black Sea where he allied himself with Mircea of Wallachia. So Süleyman had to fight in two fronts. The plot was partially successful, for Süleyman gave up his hopes to conquer the Anatolian portion of the empire. But, he was able to defeat Musa. However, Musa continued with hit and run tactics up to 1410. Meanwhile, Süleyman had lost most of his previous proponents due to his uncontrollable temper. In 1411, Musa captured Edirne. Süleyman, while trying to escape to Byzantine territories, was killed by the villagers on 18 February 1411 and Musa suddenly found himself as the co-sultan of the European portion of the empire.[1]

The details of previous Mehmet-Musa alliance are not clear. Musa declared himself the sultan of European portion of the empire, while Mehmet viewed Musa as his vassal. Musa besieged Constantinople because the Byzantine emperor had supported Süleyman during Musa-Süleyman war. This resulted in an alliance between Mehmet and the Byzantine emperor Manuel II Palaiologos.

In 1411 and in 1412, Mehmet fought Musa, but in both cases he was defeated. In 1413, Mehmet gained the support of Serbian monarch Stefan Lazarević and the bey of the Dulkadirids as well as some generals in Musa's army. (Dulkadir was a Turkish beylik in South Anatolia.) He defeated Musa's forces in the battle of Çamurlu Derbent near Samokov, Bulgaria. While trying to escape injured, Musa was spotted and killed on 5 July 1413.[2]

Musa's death marks the end of Ottoman interregnum. Mehmet Çelebi took the title Sultan Mehmet I. However in 1416, Sheikh Bedrettin, one of Musa's proponents (chief military judge, the kazasker), led an unsuccessful revolt against Mehmet I.[3] Another event which may be viewed as the continuation of the interregnum was the event of so called Düzmece Mustafa. Mustafa Çelebi was a fifth claimant to throne and he fought against both Mehmet I and Murat II unsuccessfully.