Shooting of the Romanov family

Shooting of the Romanov family 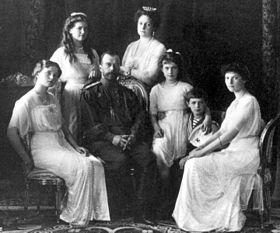 The shooting of the Romanov family, of the Russian Imperial House of Romanov, and those who chose to accompany them into exile, Dr. Eugene Botkin, Anna Demidova, Alexei Trupp, and Ivan Kharitonov,[1] took place in Yekaterinburg on July 17, 1918 on the orders of Vladimir Lenin, Yakov Sverdlov, and the Ural Soviet, in order to prevent them being subsequently used to muster the White forces in the ongoing Russian Civil War.[2][3]

On 22 March 1917, Nicholas, no longer a monarch and addressed with contempt by the sentries as "Nicholas Romanov", was reunited with his family at the Alexander Palace in Tsarskoe Selo.[4] He was placed under house arrest with his family by the Provisional Government. Surrounded by his guards, confined to their quarters, the Imperial family was rudely inspected on Nicholas's first night back at home.[4] The same night a band of soldiers broke into Grigory Rasputin's tomb and, lifting the putrefying corpse with sticks, flung it onto a pyre of logs and drenched it with gasoline. The body burned for six hours as Rasputin's ashes were scattered by the icy winds.[4] The ex-Tsar remained calm and dignified and even insisted on the children resuming their lesson with himself as tutor in history and geography. Through the newspapers he took a keen interest in the progress of the war, but he could not help reading also how the press now printed lurid stories about Rasputin and the Empress, the 'confessions' of former servants and the private lives of the self-styled 'lovers' of the Tsar's four daughters.[5]

In August 1917, Alexander Kerensky's Provisional Government evacuated the Romanovs to Tobolsk, allegedly to protect them from the rising tide of revolution. There they lived in the former Governor's mansion in considerable comfort. After the Bolsheviks came to power in October 1917, the conditions of their imprisonment grew stricter, and talk of putting Nicholas on trial grew more frequent. Nicholas was forbidden to wear epaulettes, and the sentries scrawled lewd drawings on the fence to offend his daughters. On 1 March 1918, the family was placed on soldier's rations, which meant parting with 10 devoted servants and giving up butter and coffee as luxuries.[6]

As the Bolsheviks gathered strength, leading to full-scale resistance by the summer, Nicholas, Alexandra and their daughter Maria were moved in April to Yekaterinburg. Alexei was too ill to accompany his parents and remained with his sisters Olga, Tatiana and Anastasia, not leaving Tobolsk until May 1918. The family was imprisoned with a few remaining retainers in Yekaterinburg's Ipatiev House, which was called The House of Special Purpose (Russian: Дом Особого Назначения).

The Bolsheviks had wanted to bring the tsar for a trial, but circumstances led to a quick decision to kill the whole family summarily. The Romanovs were being held by the Red Army in Yekaterinburg. As the civil war continued and the White Army (a loose alliance of anti-communist forces) were threatening to capture the city, the fear was that the Romanovs would have fallen into their hands. This was unacceptable to the Bolsheviks for two reasons: first, the tsar or any of his family members could provide a beacon to rally support to the White cause; second, the tsar, or any of his family members if the tsar were dead, would be considered the legitimate ruler of Russia by the other European nations. This would have meant that he would have been able to negotiate for greater foreign intervention on behalf of the Whites. Soon after the family was executed, the city did in fact fall to the White Army.

On 16 July 1918 forces of the Czech legion were closing on Yekaterinburg. It was unknown to them that Russia's royal family was being held under house arrest there. The Bolsheviks, believing that the Czechs were on a mission to rescue the Russian royals, panicked and executed their wards. The real reason for the Czechs being in Yekaterinburg was to protect the Trans Siberian Railway, of which they had total control. Circumstance played a large part in the execution of the Russian royal family. [7] 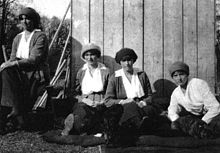 Grand Duchesses Olga, Tatiana, Maria and Anastasia Nikolaevna of Russia in captivity at Tsarskoe Selo in the spring of 1917. One of the last known photographs of Tsar Nicholas II's daughters.

The telegram giving the order to execute the prisoners on behalf of the Supreme Soviet in Moscow was signed by Yakov Sverdlov. Around midnight, Yakov Yurovsky, the commandant of The House of Special Purpose, ordered the Romanovs' physician, Dr. Eugene Botkin, to awaken the sleeping family and ask them to put on their clothes, under the pretext that the family would be moved to a safe location due to impending chaos in Yekaterinburg.[1] The Romanovs were then ordered into a 6x5 meter semi-basement room.[1] Nicholas asked if Yurovsky could bring two chairs, on which Alexei sat on his father's lap on one chair, and Alexandra sat on the other.

The prisoners were told to wait in the cellar room while the truck that would transport them was being brought to the House. A few minutes later, a firing squad was brought in and Yurovsky read aloud the order given him by the Ural Executive Committee:

Nicholas, facing his family, turned and said "What?"[1] Yurovsky quickly repeated the order and the weapons were raised. The Empress and Grand Duchess Olga, according to a guard's reminiscence, had tried to cross themselves, but failed amid the shooting. Yurovsky reportedly raised his gun at Nicholas and fired; Nicholas fell dead instantly. The other executioners then began shooting until all the intended victims had fallen. Several more shots were fired and the doors opened to scatter the smoke.[1] There were some survivors, so P.Z. Yermakov stabbed them with bayonets because the shouts could be heard outside.[1] The last to die were Anastasia, Tatiana, Olga, and Maria, who were carrying several pounds (over 1.3 kilograms) of diamonds within their clothing, thus protecting them to an extent.[8] However, they were speared with bayonets as well. Olga sustained a gunshot wound to the head. Anastasia and Maria were said to have crouched up against a wall covering their heads in terror until Maria was shot down, and Anastasia was finished off with the bayonets. Yurovsky himself killed Tatiana and Alexei. Tatiana died from a single bullet through the back of her head.[9] Alexei received two bullets to the head, right behind the ear.[10] Anna Demidova, Alexandra's maid, survived the initial onslaught but was quickly stabbed to death against the back wall while trying to defend herself with a small pillow she had carried that was filled with precious gems and jewels.[11] Military commissar Peter Ermakov, in a drunken haze, stabbed at the dead bodies of the former Tsar and Tsarina, shattering both their rib cages in a pool of blood.[12] An official announcement appeared in the national press, two days later. It reported that the monarch had been executed on the order of Uralispolkom under pressure posed by the approach of the Czechoslovaks.[13] Although official Soviet accounts place the responsibility for the decision with the Uralispolkom, Leon Trotsky in his diary states that the assassination took place on the authority of Lenin. Trotsky wrote:

My next visit to Moscow took place after the fall of Yekaterinburg. Talking to Sverdlov I asked in passing, "Oh yes and where is the tsar?" "It's all over," he answered. "He has been shot." "And where is his family?" "And the family with him." "All of them?" I asked, apparently with a touch of surprise. "All of them," replied Yakov Sverdlov. "What about it?" He was waiting to see my reaction. I made no reply. "And who made the decision?" I asked. "We decided it here. Ilyich [Lenin] believed that we shouldn't leave the Whites a live banner to rally around, especially under the present difficult circumstances.[14]

In 1989, the report of Yakov Yurovsky was published. According to the report, units of the Czechoslovak Legion, making their retreat out of Russia, were approaching Yekaterinburg. Fearing that the Legion would take the town and free him, the Bolshevik jailers executed Nicholas and his family, arguing that there was "no turning back".[15]

Ivan Plotnikov, history professor at the Maksim Gorky Ural State University, has established that the executioners were: Yakov Yurovsky, G.P. Nikulin, M.A. Medvedev (Kudrin), P.Z. Yermakov, S.P. Vaganov, A.G. Kabanov, P.S. Medvedev, V.N. Netrebin, and Y.M. Tselms. Filipp Isayevich Goloshchekin, a close associate of Yakov Sverdlov whom he had met in early July 1918 in Moscow, brought back the final orders to carry out the execution. Being a military commissar of the Uralispolkom in Yekaterinburg, Goloshchekin however did not actually participate in the executions. Most of the executioners were Russians[citation needed] with the exception of Tselms, who was Latvian[citation needed]. Yakov Sverdlov, Yurovsky and Goloshchekin also had Jewish backgrounds. Older versions of the event claim that several Hungarian ex-prisoners of war were among the executioners. Three Latvians refused at the last minute to take part in the execution.[16] 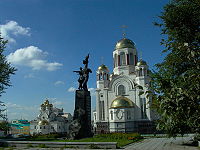 The Church on the Blood, built on the spot of Ipatyev House.

On August 15, 2000, the Russian Orthodox Church announced the canonization of the family for their "humbleness, patience and meekness".[17] However, reflecting the intense debate preceding the issue, the bishops did not proclaim the Romanovs as martyrs, but passion bearers instead (see Romanov sainthood).[17] On October 1, 2008, the Supreme Court of the Russian Federation ruled that Nicholas II and his family were victims of political repression and were rehabilitated.[18][19] On 18 July 1918, the day after the killing at Yekaterinburg of the last Tsar, Nicholas II, and his family, other Romanovs, including a nun, met a brutal death being thrown down a mineshaft near Alapayevsk.

On Thursday 26 of August, 2010, a Russian court ordered prosecutors to reopen an investigation into the murder of Tsar Nicholas II and his family, despite the fact that the Bolsheviks believed to have shot them in 1918 are long dead. The Russian prosecutor general’s main investigative unit said it had formally closed a criminal investigation into the killing of Nicholas because too much time had elapsed since the crime and because those responsible had died. However, Moscow’s Basmanny Court ordered the case to be reopened saying that a Supreme Court ruling blaming the state for the killings made the deaths of the actual gunmen irrelevant, according to a lawyer for the Tsar’s descendants and local news agencies.[20]

Over the years, a number of people have claimed to be survivors of the ill-fated family. The process to identify the remains was exhaustive. Samples were sent to Britain and the United States for DNA analysis. The tests concluded that five of the skeletons were members of one family and four were unrelated. Three of the five were determined to be the children of two parents. The mother was linked to the British royal family, as was Alexandra. Prince Philip, Duke of Edinburgh, grandson of Alexandra's oldest sister Victoria, Marchioness of Milford-Haven, gave a DNA sample which matched with that of the remains. The father was determined to be related to Grand Duke George Alexandrovich, younger brother of Nicholas II. British scientists said they were more than 98.5% sure that the remains were those of the Tsar, his family and their attendants.[21][22] Relics from the Ōtsu Scandal, a failed assassination attempt on Nicholas II, failed to provide sufficient evidence due to contamination. Nicholas's skeleton was confirmed to be his after its excavation on 22 June 1992. On December 5, 2008 the remains excavated in 1991 were ultimately identified as those of Nicholas II by Russian and American scientists using DNA analysis.[23]