On May 6, 2002, Dutch politician Pim Fortuyn was assassinated in Hilversum, North Holland, by Volkert van der Graaf nine days before the Dutch general election of 2002 which he was widely expected to win.[1][2]

On 6 May 2002 at age of 54, Fortuyn was assassinated in Hilversum, North Holland, by Volkert van der Graaf. The attack took place in a parking lot outside a radio studio in Hilversum where Fortuyn had just given an interview to Ruud de Wild at 3FM. This was nine days before the general election, for which he was running. The attacker was pursued by Hans Smolders, Fortuyn's driver, and was arrested by the police shortly afterwards, still in possession of a gun.

The assassination shocked many inhabitants of the Netherlands and made the cultural clashes within the country apparent. Politicians from all political parties suspended campaigning. After consultation with Pim Fortuyn List, it was decided not to postpone the elections. However, under Dutch law, it was not possible to modify the ballots, so Fortuyn became a posthumous candidate. The Pim Fortuyn List went on to win an unprecedented debut in the House of Representatives, winning 26 seats (17% of the 150 seats in the house). However, after the elections the following year, this figure dropped to eight seats, and after the 2006 elections the party had no seats left in the House of Representatives. 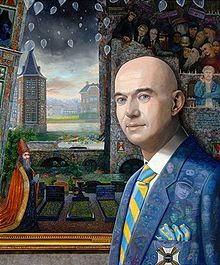 Painting of Pim Fortuyn as by Jean Thomassen

Fortuyn can be credited with changing the Dutch political landscape and political culture. The 2002 elections, only weeks after Fortuyn's death, were marked by large losses for the liberal People's Party for Freedom and Democracy and especially the social democratic Labour Party (whose parliamentary group was halved in size); both parties replaced their leaders shortly after their losses. The election winners were the Pim Fortuyn List, and the Christian democratic Christian Democratic Appeal. On the other hand, others speculate that Fortuyn's perceived martyrdom may have played into the hands of the Pim Fortuyn List.[3]

The coalition cabinet of Christian Democratic Appeal, Pim Fortuyn List and People's Party for Freedom and Democracy fell within three months, due to infighting within the Pim Fortuyn List. In the following elections the Pim Fortuyn List was diminished to only 8 seats in the House of Representatives out of 150) and was not included in the new government; however, political commentators speculated that there was still a sizeable number of discontented voters who might vote for a non-traditional party, if a viable alternative was at hand. In recent times the right-wing Party for Freedom, which has a strong stance on immigration and integration, has won 9 (out of 150) seats in the 2006 elections and 24 in 2010.

In 2004, in a TV show, Fortuyn was chosen as De Grootste Nederlander ("Greatest Dutchman of all-time"), followed closely by William the Silent, the leader of the independence war that established the precursor to the present-day Netherlands. However, the election was widely regarded as not being representative as it was held through the internet and by phoning in, and so easily hijacked and possibly influenced by Fortuyn’s supporters, who had his violent death still fresh on their minds.[4]

Also, the murder of the controversial film director Theo van Gogh by a Muslim for comments critical of Islam had occurred a few days before the election and undoubtedly moved many voters to bring Fortuyn higher in the ranking. It later turned out that William the Silent had in fact received more votes before the closing of the vote, but that many of these could not be counted until after the official closing time of the television show (and the proclamation of the winner), due to technical problems. The official rules of the show outlined that votes counted before the end of the show would be decisive, although it was communicated that all votes correctly cast before the closing of the vote would be counted. Following the official rules, the outcome was not changed [5]

After Fortuyn's death, the Netherlands saw a rise in right-wing politicians, like former Minister for Integration and Immigration Rita Verdonk and the prominent critic of Islam, Member of the House of Representatives Geert Wilders. These politicians often focused on the debate over cultural assimilation and integration.[6]