The murder of Ofir Rahum was a shooting attack which occurred on January 17, 2001, in which Palestinian militants killed 16-year-old Israeli high school student Ofir Rahum.

Rahum was lured over the Internet by Mona Jaud Awana, a 24 year-old Palestinian PLA Collaborator from Bir Nabala, who managed to seduce Rahum through an online chat by pretending to be a young American tourist called Sally and invited him to meet her in Jerusalem for a seemingly romantic meeting. Mona managed to drive him to a remote area in the outskirts of Ramallah where a Palestinian terrorist cell showed up and shot Rahum at close range.[1][2] 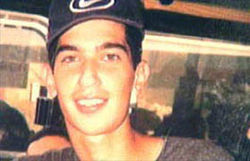 Mona Awana, who was later arrested by the Israeli police, said she decided the day the Palestinians carried out the lynching of two Israelis soldiers in Ramallah in late 2000 to abduct an Israeli and murder him. Mona had been present at the Ramallah lynching, and said she was "excited" by what she saw. Soon after, Mona started to make contact with Israelis on the Internet.[3] Awana contacted several Israeli teenagers via chat rooms. Then she targeted Rahum with whom she pretended to start an online romance. In conversations over several months Mona pressed for one thing — a meeting in Jerusalem. When Rahum suggested a venue closer to his home, she said she couldn't get a car. When he said his parents would object, she promised to get him back by 5. That vow and a few sexual innuendos persuaded the boy. "You don't know how much I am waiting for Wednesday," Mona wrote him two days before.[4] When he came to meet her, she convinced him to escort her to Ramallah.[5]

Awana then drove him toward Ramallah. Somewhere on the way, according to Palestinian eye-witnesses interviewed by a French news agency,[6] at a prearranged location, she bolted from the car, another vehicle drove up and three Palestinian gunmen inside shot Ofir more than 15 times. One terrorist drove off with Ofir's body and dumped it, while the others fled in the second vehicle.[7]

The 25-year-old woman, Amana Jawad, was arrested in Bir Nabala after a massive police and army operation.[8] She confessed to being involved in the murder.[9] Mona confessed to her part in murdering Ofir Rahum along with two senior Ramallah-area Fatah Tanzim operatives - Hassan Alkadi and Abdul Fatah Doleh from Beituniya.[10]

Israel's Permanent Representative to the United Nations wrote a letter addressed to the Secretary-General trying to draw his attentions to the "recent acts of Palestinian terrorism directed against Israeli civilians".[11]

Mona Awana was convicted in February 2003 for murdering Rahum [12] and was given a life sentence.[13]

On April 30, 2001, seven Palestinian militants, one of them a participant in Rahum's murder, were killed in an explosion. Palestinians claimed that Israel was responsible, while the IDF refused to admit involvement.[citation needed]

On 18 October 2011 Mona Jaud Awana, whom was originally sentenced to 1 life sentence, was released to Gaza as part of the Gilad Shalit prisoner exchange between Israel and Hamas.[14] Awana is now residing in exile in Turkey.[15]