Murça (Portuguese pronunciation: [ˈmuɾsɐ]) is a municipality in norhern Portugal with a total area of 189.37 and a total population of 6,476 inhabitants. Situated in the central part of the eastern district of Vila Real, and consigned to the Trás-os-Montes e Alto Douro region, the municipality of Murça occupies an are of approximately 189 km². The town of Murça, seat of the municipal government, is on average 40 kilometres from many of the major urban centres of the region. Murça's proximty to Vila Real and access to the IP4 motorway makes Murça potentially advantageous to development. 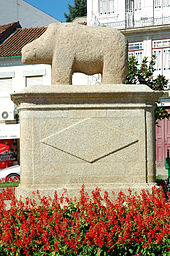 The Porca de Murça: an ancient Celt divinty found in the region of Murça

Although there are no clear references to the origin of this community, most suspect that it extends to Celtic period, primarily due to the Porca de Murça (English: Pig of Murça), a celebrated monument to a wildboar (and presumably a Celtic divinty).[1]

The first references to the region of Murça appeared in the Inquirições (inquiries/inventory) of King Afonso II.[1] Municipal autonomy became a reality in the 13th century, when King Sancho II issued a foral (charter) on 8 May 1224.[1] This was later confirmed and elaborated by Afonso III on 10 January 1268. Similar charters were elaborated on 18 April 1304 and 9 May 1512, by Kings Denis and Manuel, respectively.[1]

In the 20th century, an administrative commission (Portuguese: Comissão Administrativa Franquista) was created on 2 January 1908, by the Partido Regenerador Liberal (English: Liberal Regenerator Party), to promote local politics, in order to realize the regions first elections.[1] The Regenerator Party was successful in these early elections, resulting in the taking of office of Father João M. Ribalonga, who wold guide the administration of the municipality from 30 November 1908 until the 5 October 1910 Revolution.[1] The first republican municipal commission was elected on 19 March 1911.[1]

During the Estado Novo regime (1933-1974) the first municipal regalia, including coat-of-arms, flag and seal, were established, in addition to the changing of many road names.[1]

After the Carnation Revolution (25 April 1974), there was a great upheaval in local government, that forced a democratic structure and implemented many dynamic changes to financial and political laws.[1]

Murça can be identified in terms of three subregions in the Trans-os-Montes: the Terra Quente (English: Hot Lands), the Terra Fria (English: Cold Lands) and the Zona de Montanha (English: Mountain Zone), with their own distinct natural, social and cultural characteristics.[1] The are distinct contrasts in the villages and towns of Trás-os-Montes, with scolding hot summers and icy winters, in lands that are marked by granite mountain faces, schist walls and steep or shallow valleys.The green forests and granite rocks of the Serra da Garraia or Parque Florestal de Mascanho (Mascanho Forest Park) dominate the north portions of the municipality, as does the chestnut forest of Jou and Vilares. Between many of the mountains and plains are olive orchards, part of the Rota de Azeite (English: Olive Oil Route), and interspersed by wheat fields or almond trees in flower, or the vineyards of the Alto Douro.

The municipality is composed of 9 parishes, and is located in the district of Vila Real.