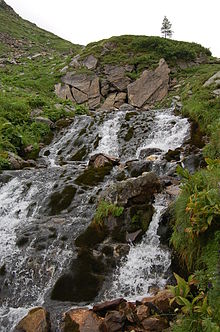 Source of the Mur (Murursprung)

The Mur (the river's German name; Croatian, Hungarian, and Slovene: Mura, Prekmurje dialect: Müra, or Möra) is a river in Central Europe rising in the Hohe Tauern national park in Austria with its source being 1,898 metres above sea level, a tributary of the Drava and subsequently the Danube.

The Mur's total length is 438 kilometres (272 mi),[1] of which 295 km is in Austria, 95 km is in Slovenia, and the rest forms the border between Croatia and Hungary.[1] The largest city on the river is Graz, Austria. Portions of the river also form parts of the Austrian-Slovenian, Slovenia-Croatian, and Croatian-Hungarian borders. Its basin covers an area of 13,800 km2 (5,300 sq mi).[2]

In Austria several hydroelectric dams have been constructed for the production of renewable energy.

In the upper Međimurje area, in the western part of the region, the Mur floods and changes its course rather often, moving slowly toward the north on its left. Here, the biggest forest along the river, the Murščak, is located between Domašinec and Donji Hrašćan (derived from Croatian hrast 'oak').

Since the 4th century BC, there have been reports of floating mills powered by the streams of the river. The ancient technology was adopted later by arriving Slavs and then by Magyars. Several decades ago, in the 1920s and 1930s, many of these mills were still operating along the river. At least one of the old mills, the Babič Mill (Slovene: Babičev mlin) near Veržej, Slovenia, continues to operate to this day.

The river ends near Legrad in Koprivnica-Križevci county, Croatia, where it flows into the Drava River.

The hydrological parameters of Mura are regularly monitored in Croatia at Mursko Središće.[3]

The Mur is known to carry small quantities of gold, not enough to be suitable for exploitation today, but this was a focus of activity for many people since ancient times. Organized research and exploitation of gold and other local resources was encouraged for the first time in 1772.