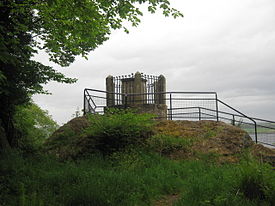 The monument that marks the Battle of Clachnaharry where John Munro, 1st of Milntown led the Munros against the Mackintoshes.

The Munros of Milntown descend from chief Hugh Munro, 9th Baron of Foulis (d.1425) who supported the Lord of the Isles at the Battle of Harlaw in 1411. A younger son of his was John Munro, the first of the Minltown line, whose elder brother George Munro of Foulis was killed during the Battle of Bealach nam Broig in 1452. Thus the chieftainship was left to George's then baby son also called John Munro (d.1490). While John Munro of Foulis was still an infant his uncle John Munro of Milntown became a temporary chief of the clan.

Perhaps the most famous of the Milntown line was Andrew Munro, 3rd of Milntown who became known as Black Andrew of the seven castles. He received a crown charter for his lands with the office of chief mair or steward of the Earldom of Ross. In 1512 King James IV of Scotland granted him the "croft of called the markland of Tulloch" for the annual payment of one pound of wax, payable at midsummer within the Chapel of Delny.[3] In addition to the lands of Milntown, Andrew acquired by grants and purchases extensive possessions in the county of Ross, such as Delny and Newmore in the parish of Rosskeen, Contullich and Kildermorie in the parish of Alness, Dochcarty in the parish of Dingwall, Allan in the parish of Fearn and Culnauld in the parish of Nigg. He was known amongst the local residents as Black Andrew of the seven castles because he had a castle on each of his seven estates, including Contullich Castle and Milntown Castle. Andrew had three sons;

Black Andrew died in 1522 and was succeeded by his eldest son George Munro, 4th of Milntown.[1]

In 1561 George Munro, 4th of Milntown was appointed, by the Queen, Ballie and Chamberlain of her lands and lordships of Ross and Ardmenach, the appointment to continue during her pleasure.

In 1562 at Delvines, Nairn, Alistair Gunn chief of Clan Gunn insulted the Earl of Moray who soon afterwards sent the Munros to capture Alistair Gunn. The Munros led by one Andrew Munro of Milntown entrapped the Gunns at a place called Delvines near Nairn. The Gunn Chief was captured and taken to Inverness where the Earl of Moray had him executed "under pretence of justice".[4] 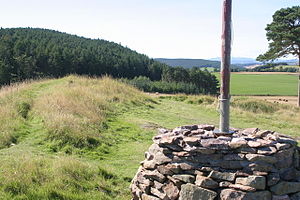 Ormond Hill where Ormond Castle once stood which was acquired by Andrew Munro, 5th of Milntown.

George died in 1576 and was succeeded by his eldest son, Andrew Munro, 5th of Milntown.[1]

In 1568 Ormond Castle and the lands of Suddie in Avoch were acquired by Andrew Munro, 5th of Milntown, also known as Andrew Munro of Newmore during his father's lifetime.[5]

Fortrose, Black Isle 1569-73; With the Mackenzies the Munros were often at feud, and Andrew Munro, 5th of Milntown defended and held, for three years, the Castle Chanonry of Ross, which he had received from the Regent Moray who died in 1569, against the Clan Mackenzie, at the expense of many lives on both sides. The feud was settled when the castle was handed over to the Mackenzies peacefully under the act of pacification (a treaty of peace to cease hostilities), because the Mackenzies had more legal right to own the castle.[6][7]

In Alexander Mackenzie's book 'The History of the Mackenzies' published in 1890 and 'History of the Munroes of Fowlis published in 1898 he claims that an attempted sortie by the Munros for fish at a nearby loch was foiled and as a result the Mackenzies took control of the castle.[1] Although it is recorded by much earlier evidence to have been handed over peacfully under King James VI:

Sir Robert Gordon (1580–1656) writes of the feud in his book "Genealogical History of the Earldom of Sutherland":

The Munros defended and kept the Castle for the space of thrie yeirs, with great slaughter on either syd, vntill it was delyvered to the Clanchenzie, by the Act of Pacification. And this wes the ground beginning of the feud and hartburning, which to this day, remaynes between the Clanchenzie and Munrois [8] 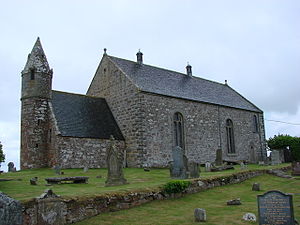 Kilmuir Easter Church, the tower and belfry were built by George Munro, 6th of Milntown and includes the armorial crest of the Munros and his initials: "G.M".

The Munro of Milntown family came to rival their chiefs the Munros of Foulis in power and influence. In 1621 George Munro 6th, of Milntown became MP for Inverness-shire, which then included Ross, Sutherland and Caithness. George also added Meikle, Tarrel and Ballone to his lands, and sat in the Scots Parliament between 1617 and 1621.[9] George also built the tower and belfry of the Church of Kilmuir-Easter, on top of which is an eagle, the armorial crest of the Munros and a monogram; G.M, his initials. George Munro 6th of Milntown had three sons from his first marriage and later two sons from a second marriage:[1]

George Munro, 7th of Milntown upon receiving his father's lands of Milntown also received the mills and office of chir mair of the Earldom of Ross which included 8 chalders, 4 bolls of victual, a croft named Markland of Tullich, of the extent of one pound of wax and the lands and town of Meikle Meddat of the extent of 6 chalders of bear and oatmeal, other dues, its ale house in the Barony of Delnie, Earldom of Ross and Sherrifdom of Inverness.[10] George Munro, 7th of Milntown had two sons: Andrew Munro, 8th of Milntown and also Hugh Munro who married an unknown.[11]

Andrew Munro, 8th of Milntown was the last of the family to possess the Milntown estate but he continued to dispute Mackenzie domination of the Black Isle. Andrew Munro served as a Capatain under his kinsmen, George Munro, 1st of Newmore during the Irish Confederate Wars. While he was away Milntown Castle was burned down by carelessness in 1642, and what was left of Munro's old work was demolished to make way for a Mackenzie purchaser's improvements. The office of Milntown Castle was sold in 1656 to George Mackenzie of Tarbet who later became George Mackenzie, 1st Earl of Cromartie.[1] In 1644 Andrew Munro, 8th of Milntown returned to Scotland and took a distinguished part in the Battle of Kilsyth, where he was killed fighting at the head of his company. Andrew Munro was the last in the senior line of the Munros of Milntown.[1]

Although Andrew Munro, 8th of Milntown was the last in the senior line of this family as recorded by historian Alexander Mackenzie, the same historian also notes John Munro of Milntown in 1724 along with several other members of the Munro family and David Bethune of Culnaskea who were all appointed Commissioners of a call on behalf of the parish of Kiltearn to Rev. John Balfour of Logie-Easter as successor to the Rev. Hugh Campbell.[12]