The Bavarian Allgäu railway is railway in the German state of Bavaria, running from Munich to Lindau via Buchloe, Kaufbeuren and Kempten. The southern part of the line runs through the Allgäu region. The section from Buchloe to Lindau was built as part of the Ludwig South-North Railway, one of the oldest lines in Germany.

Until the mid-1960s, when V200 diesel locomotives were introduced, reducing the travel time between Munich and Lindau by about 30 minutes, the Allgäu line was worked by steam locomotives. High-quality and international express services were hauled by Bavarian S 3/6 (later DB Class 18.4-5) for many decades.

Rail-road buses were used between 23 May 1954 and 31 May 1958, running via rail from Augsburg to Pforzen, Biessenhofen and Roßhaupten, where they transferred to road to continue to Füssen. 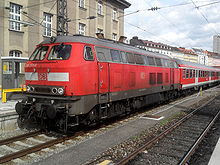 All remaining stations on the Allgäu line have at least hourly services, except Günzach, where trains run only two hours. In addition to the Arriva-Länderbahn-Express (ALEX) service from Munich to Lindau, which runs every two hours, supplementary services operate on various sections of the route:

A Trans-Europ-Express (first class only) service was introduced in the 1969/70 winter timetable, running on the Munich–Lindau–Bregenz–St. Margrethen–St. Gallen–Winterthur–Zurich (lines 56 and 57), called Bavaria. On the evening of 9 February 1971 a TEE 56 service derailed on the Munich–Zurich route at Aitrang due to speeding, killing 28 people and seriously injuring 42. In 1977, the TEE service was replaced by a "D" (two-class express) service between Zurich and Munich (lines 276 and 277).

The German EuroCity trains on the line were replaced by ICE TD (class 605) diesel multiple units in 2001/2002 on the Munich–Lindau–St. Gallen–Zurich route. These trains from the start, however, had significant deficiencies that were resolved only gradually. After 24 July 2003, the authorisation for the series to run on the line was cancelled and EuroCity trains were reintroduced.

The line is no longer a significant route for international freight. It serves as an important detour route around the Austrian Arlberg railway during disruptions, requiring diesel haulage.

On the line are still some companies that are served several times a week by rail.

The Allgäu rail project was launched some years ago to upgrade the line for tilting, but work has now been suspended.

Development of the alternative route via Memmingen and Kißlegg

On 15 February 2008, the German Federal Minister of Transport, Wolfgang Tiefensee and his Swiss counterpart, Moritz Leuenberger signed in Memmingen a Memorandum of Understanding in relation to the development of the Munich–Lindau route, including the electrification of the section between Geltendorf and Lindau Aeschach.[2] This statement was followed on 18 December 2008 by a financial agreement. However, this is not concerned with the Kaufbeuren–Kempten–Immenstadt line, but the alternative route via Memmingen and Kißlegg (Buchloe–Memmingen, Leutkirch–Memmingen and Württemberg Allgäu lines). This means that the Bavarian Allgäu line of would only benefit by the electrification of the Geltendorf–Buchloe (26 kilometres) and the Hergatz–Lindau (23 kilometres) sections.

This means that the current sparse international connections on the Allgäu line via Kempten will eventually be lost entirely. Development of the Memmingen route will commence in 2010 and be completed in 2015. Thereafter, international long distance trains will run through a newly built station in Lindau-Reutin, avoiding the Lindau Hauptbahnhof, which is a terminal station, requiring reversals. The number of tracks of this station will then be reduced. The estimated cost of the project is € 205 million, shared between the German Federal Government, Bavaria and Switzerland.

This upgrade is being built to complement the future Gotthard Base Tunnel. In particular, Switzerland would like to use the Munich–Buchloe–Memmingen–Lindau–Bregenz route as an access route for this new transport axis. The development of the line will reduce the times for passenger services between Munich and Zurich from four hours today to only three hours.