Multiple-effect distillation (MED) is a distillation process often used for sea water desalination. It consists of multiple stages or "effects". In each stage the feed water is heated by steam in tubes. Some of the water evaporates, and this steam flows into the tubes of the next stage, heating and evaporating more water. Each stage essentially reuses the energy from the previous stage.

The tubes can be submerged in the feed water, but more typically the feed water is sprayed on the top of a bank of horizontal tubes, and then drips from tube to tube until it is collected at the bottom of the stage. 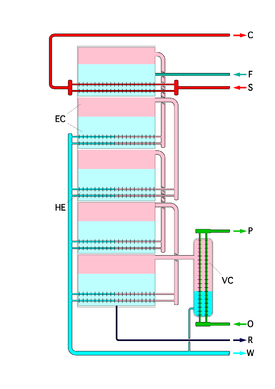 Schematic of a multiple effect desalination plant. The first stage is at the top. Pink areas are vapor, lighter blue areas are liquid feed water. Stronger turquoise is condensate. It is not shown how feed water enters other stages than the first. F - feed water in. S - heating steam in. C - heating steam out. W - Fresh water (condensate) out. R - brine out. O - coolant in. P - coolant out. VC is the last-stage cooler.

The plant can be seen as a sequence of closed spaces separated by tube walls, with a heat source in one end and a heat sink in the other end. Each space consists of two communicating subspaces, the exterior of the tubes of stage n and the interior of the tubes in stage n+1. Each space has a lower temperature and pressure than the previous space, and the tube walls have intermediate temperatures between the temperatures of the fluids on each side. The pressure in a space cannot be in equilibrium with the temperatures of the walls of both subspaces. It has an intermediate pressure. Then the pressure is too low or the temperature too high in the first subspace, and the water evaporates. In the second subspace, the pressure is too high or the temperature too low, and the vapor condenses. This carries evaporation energy from the warmer first subspace to the colder second subspace. At the second subspace the energy flows by conduction through the tube walls to the colder next space.

The thinner the metal in the tubes and the thinner the layers of liquid on either side of the tube walls, the more efficient is the energy transport from space to space. Introducing more stages between the heat source and sink reduces the temperature difference between the spaces and greatly reduces the heat transport per unit surface of the tubes. The energy supplied is reused more times to evaporate more water, but the process takes much longer time. The amount of water distilled per stage is directly proportional to the amount of energy transport. If the transport is slowed down, one can increase the surface area per stage, i.e. the number and length of the tubes, at the expense of increased installation cost.

The lowest pressure stages need relatively more surface area to achieve the same energy transport across the tube walls. The expense of installing this surface area limits the usefulness of using very low pressures and temperatures in the later stages. Gases dissolved in the feed water may contribute to reducing the pressure differentials if they are allowed to accumulate in the stages.