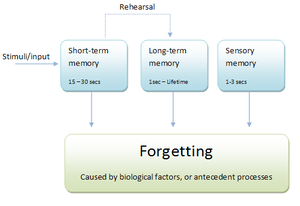 Note that in this diagram, sensory memory is detached from either form of memory, and represents its development from short term and long term memory, due to its storage being used primarily on a "run time" basis for physical or psychosomatic reference.

The Atkinson–Shiffrin model (also known as the multi-store model is a model of memory that has the advantage of being able to be broken down into sub-models of memory: the multi-memory model and the Modal model) is a psychological model proposed in 1968 by Richard Atkinson and Richard Shiffrin[1] as a proposal for the structure of memory. It proposed that human memory involves a sequence of three stages:

The original 2-stage model of the Atkinson–Shiffrin memory model; lacking the "sensory memory" stage, which was devised at a later stage in research

The multi-store model of memory is an explanation of how memory processes work. You hear, see, and feel many things, but only a small number are remembered. The model was first described by Atkinson and Shiffrin in 1968. Since Atkinson and Shiffrin originally proposed their dual-store model, it has undergone numerous adjustments and improvements. The most recent version of this model is called Search of Associative Memory (SAM) (Raaijmakers & Shiffrin, 1981).

The sense organs have a limited ability to store information about the world in a fairly unprocessed way for less than a second. The visual system possesses iconic memory for visual stimuli such as shape, size, colour and location (but not meaning), whereas the hearing system has echoic memory for auditory stimuli. Coltheart et al. (1974) have argued that the momentary freezing of visual input allows us to select which aspects of the input should go on for further memory processing. In this visual modality, information that enters the sensory store will be eliminated from the store within several hundred milliseconds (Baddeley, 1966). The existence of sensory memory has been experimentally demonstrated by Sperling (1960) using a tachistoscope.

Information is retained acoustically and visually long enough to use it, e.g. looking up a telephone number and remembering it long enough to dial it. Peterson and Peterson (1959) have demonstrated that STM last approximately between 15 and 30 seconds, unless people rehearse the material, while Miller (1956) has found that STM has a limited capacity of around 7+ or −2 ‘chunks’ of information.[2] STM also appears to mostly encode memory acoustically (in terms of sound) as Baddeley (1966) has demonstrated, but can also retain visuospatial images. However in many cases STM can be at a semantic level. In addition to using the short-term store (STS) as the primary memory device when desired for certain tasks, such as remembering a telephone number after looking it up, the STS fulfills various other functions. Instead of the memory system having to pay moment-to-moment attention to the environment to account for all environmental changes, the (STS) serves as a buffer and separates the environment from the memory system. It also functions as a working memory in which alterations of information can occur. However, these manipulations are only temporary (Baddeley, 1966).

LTM provides the lasting retention of information, from minutes to a lifetime. Long term memory appears to have an almost limitless capacity to retain information, but it could never be measured as it would take too long. LT information seems to be encoded mainly in terms of meaning (semantic memory) as Baddeley has shown, but also retains procedural skills and imagery.

Memory may also be transported directly from sensory memory to LTM if it receives instant attention, e.g. witnessing a fire in your house. This is known as a "Flashbulb Memory". Another example of this is the fact that most people living in the United States at the time can recall what they were doing on the day of September 11, 2001, as it was the day of an extreme event. Recent research has shown, however, that "flashbulb memory" is not as reliable as it was once thought to be.[citation needed]

Also if information in the LTM is not rehearsed it can be forgotten through trace decay.

To obtain a qualitatively correct fit of the bowing four model concepts have to work together. “Long term memory” is needed in the short term memory experiment, conscious or subconscious rehearsal of four items has to take place, this “rehearsal buffer” has to drop items randomly rather than according to a first-in firstout model, and the rehearsal buffer has to be empty before the experiment starts. Beyond the qualitative fit to the bowed recall curves, other relationships in the data are not borne out by the model. First, the “primacy strength”, the ratio of the probability of recall of the first item to the smallest probability of recall of an intermediate item, shows a significant experimental variation with presentation rate but no such variation is predicted by theory. Second, randomly emptying the rehearsal buffer predicts incorrectly that the number of recalled items should be the highest when the first recalled item is the last list item. Third, a simplified Atkinson–Shiffrin model is found to predict exact relationships between the recall probabilities of the initial items which do not seem to be borne out by the Murdock data. Fourth, the theory predicts a discontinuity in the differences between free recall graphs with different presentation rates for early list items which is probably not found in the Murdock data. See Tarnow (2009): http://www.webmedcentral.com/article_view/1021

In the case of sensory memory, the model, which is psychological, does not provide a ready explanation for the observed asynchronous nature of neural activity occurring between anatomical structures[citation needed] – an example of this would be the reference to sensory memory being used to perform physical processes such as motor function, which suggests that once an action is performed, it is remembered for 3 seconds and then begins a process of rapid decay[citation needed] .

Whilst case studies of individuals (such as Clive Wearing) have been reported indicating that memory can be severely damaged independent of at least some other cognitive capacities[citation needed], there is less support from case studies of developmental models for the supposed tri-partite memory structure[citation needed]. Some have argued that autistic savant performance may violate predictions from the model, based on an ability to recall precise information without the need for rehearsal[citation needed], and without evidence for decay[citation needed].

The advent of the model provided a testable framework for subsequent work, and a strong stimulus for the experiemental study of human memory[citation needed]. This has led to the model being superseded[citation needed]. Newer models include the possibility for cases where short-term memory is impaired, but long-term memory is not (which is impossible in the basic model, as information can only become encoded in long-term memory after passing through the unitary short-term store).

Much recent work has focussed on the model proposed by Alan Baddeley, which distinguishes stores for phonological (speech-sound), and visuo-spatial information as well as episodic material, and proposes the existence of central executive processes, accessing these stores.[3]

Atkinson and Shiffrin also refrain from proposing any mechanisms or processes that might be responsible for encoding memories and transferring them between the three systems. The model is a hypothetical layout of the function of memory systems, but not in any way representative of a physical or biological basis of memory. Newer models have been created that can better account for these other characteristics, and a tremendous body of research on the physical layout of memory systems has emerged[citation needed].

The SAM model uses a two-phase memory system: short-term store (STS) and long-term store (LTS). Unlike the revised version of the Atkinson-Shiffrin model, there is no sensory store in the SAM model (Raaijmakers & Shiffrin, 1981).

STS takes on the form of a buffer, which has a limited capacity. The model assumes a buffer rehearsal system in which the buffer has a size, r. Items enter the STS and accompany other items that are already present in the buffer, until size r has been reached. Once the buffer is at full capacity, when new items enter, they replace an item, r, which already exists in the buffer. A probability of 1/r determines which already existing item will be replaced from the buffer (Raaijkamers & Shiffrin, 1981). In general, items that have been in the buffer for longer are more likely to be replaced (Phillips et al., 1967).

LTS is responsible for store relationships between different items and between items and their contexts. The amount of time that an item remains in the buffer or STS is proportional to the amount of item-context information stored in LTS. On the other hand, the strength of the item-item associations is proportional to the amount of time that two items simultaneously existed in the buffer. Context information refers to the situational and temporal factors present at the time when an item is in STS, such as emotional feelings or environmental details (Raaijkamers and Shiffrin, 1981). Until Sirotin et al. demonstrated otherwise, this original model assumes that items in a particular list are only weakly semantically related before the experiment and that the only significant associations are those formed during the study portion of an experiment. However, more recent analyses of the model take into account semantic similarity with an LTS that is broken down into two components: one related to episodic memory and the other related to semantic memory (Sirotin et al., 2005).

Memories stored in LTS are retrieved in a two-step process involving sampling and recovery or recall. An item is sampled by using context as a retrieval cue, so the probability that an item will be sampled is related to the strength of the association between that item and the context being presented. Items that have already been immediately recalled from STS are not possible candidates for sampling. Once an item is sampled as having the greatest association between item and context, it is then evaluated for recall (Raaijmakers and Shiffrin, 1981).

The usefulness of the SAM model and in particular STS is often demonstrated by its application to the recency effect in free recall. When serial-position curves are applied to SAM, a strong recency effect is observed, but this affect is strongly diminished when a distractor, usually arithmetic, is placed in between study and test trials. The recency effect occurs because items at the end of the test list are likely to still be present in STS and therefore retrieved first. However, when new information is processed, this item enters the STS and displaces other information from it. When a distracting task is given after the presentation of all items, information from this task displaces the last items from STS, resulting in a substantial reduction of recency (Raaijmakers and Shiffrin, 1981).

Problems for the SAM Model

The SAM model faces serious problems in accounting for long-term recency data (R. A. Bjork and Whitten, 1974) and long-range contiguity data (Howard & Kahana, 1999). While both of these effects are observed, the STS cannot account for the effects. Since a distracting tasks after the presentation of word pairs or large interpresentation intervals (IPIs) filled with distractors would be expected to displace the last few studied items from STS, recency effects are still observed. According to the rules of STS, recency and contiguity effects should be eliminated with these distractors as the most recently studied items would no longer be present in STS. Currently, the SAM model competes with single-store free recall models of memory, such as the Temporal Context Model (Howard & Kahana, 2002a).