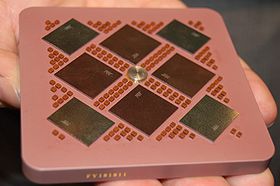 A multi-chip module (MCM) is a specialized electronic package where multiple integrated circuits (ICs), semiconductor dies or other discrete components are packaged onto a unifying substrate, facilitating their use as a single component (as though a larger IC). The MCM itself will often be referred to as a "chip" in designs, thus illustrating its integrated nature.

Multi-Chip Modules come in a variety of forms depending on the complexity and development philosophies of their designers. These can range from using pre-packaged ICs on a small printed circuit board (PCB) meant to mimic the package footprint of an existing chip package to fully custom chip packages integrating many chip dies on a High Density Interconnection (HDI) substrate.

Multi-Chip Module packaging is an important facet of modern electronic miniaturization and micro-electronic systems. MCMs are classified according to the technology used to create the HDI (High Density Interconnection) substrate.

A relatively new development in MCM technology is the so-called "chip-stack" package. Certain ICs, memories in particular, have very similar or identical pinouts when used multiple times within systems. A carefully designed substrate can allow these dies to be stacked in a vertical configuration making the resultant MCM's footprint much smaller (albeit at the cost of a thicker or taller chip). Since area is more often at a premium in miniature electronics designs, the chip-stack is an attractive option in many applications such as cell phones and personal digital assistants (PDAs). After a thinning process, as many as ten dies can be stacked to created a high capacity SD memory card.