It is located in the South Western Zone of Punjab and is bounded by the States of Rajasthan and Haryana in the South. The district of Faridkot lies to its North and Bathinda to the East.It lies between 30° 69’ and 29° 87’ latitude and 74° 21’ and 74° 86’ longitude.[4]
Climate is determined by the Western Himalayas to the North of Punjab and Thar desert to the South. The South-western monsoon brings the rain bearing depression during summer(July to September). Nearly 70% of rainfall is received during the months of July to September. The extreme type of climate is present with temperature varying from 45°C in June to as low as 2°C in January. The major part of the district has aridic moisture regime. Soil moisture regime computations employing the Newhall mathematical model indicate that the area has 'weak aridic' moisture regime(Van Wambeke, 1985).[5]

Sri Muktsar Sahib has a proud heritage. It is known as the last battlefield of Guru Gobind Singh in 1705 A.D., which proved to be a most decisive conflict in the military history of the Sikhs. Literally the name of this city means "the pool of liberation". The forty Sikh warriors who fought to death here against the Mughal Empire more than three centuries ago are remembered by a grand festival held here every January, which attracts devotees from all over the world.

It was during the 1740s that some Sikh families Settled here Then a Town Where the Battlefield used to be came into being. Later It took the name Sri Muktsar Sahib Renamed from Kidhrani di Dhab. a Gurdwaras Was Built later Sardar Hari Singh Nalwa (1791-1837) Visited Muktsar Sahib and did kar sewa of Muktsar Sahib Building which was in 1980s Replaces with a New Building. 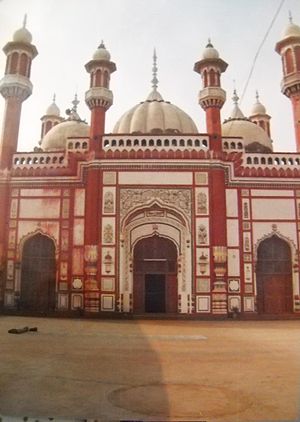 The Famous Mosque at Sri Muktsar Sahib. After Partition it was accorded into a gurudwara, but then in 1996 it was handed over to Wakf Board under an arrangemet between the Wakf and SGPC. Now namaz is read all five times a day and the considerably growing populace of Muslims at Sri Muktsar Sahib have it as their paramount religious and cultural centre. Photograph by Jagmohan Singh Khurmi

The Mela Maghi ( ਮੇਲਾ ਮਾਘੀ )[6] held in the town of Muktsar, a day after Lohri (13 January) is very famous. Held every January it is to commemorate the valour of 40 Muktas, (or the liberated ones), who laid down their lives following Sri Guru Gobind Singh into the battle-field of Khidrana (ਖਿਦਰਾਨੇ ਦੀ ਢਾਬ ). In other words, Muktsar( Mukt & Sar) means land of 40 martyrs i.e. 40 muktyaa di dharti(sar). The city is blessed with the holy gurudwara Tutti Gandi Sahib. All the roads entering into the city have beautiful entrance gates on the outskirts.

The huge Mela is held at an open space mainly on the Bathinda & Malout roads. People from all over the world, come to Sri Muktsar Sahib on this day to take a dip in the holy sarovar.

Traditionally a horse fair was also held on this occasion but it is not held anymore.

A few years ago, a new monument was built in the shape of Khanda Sahib.