After completing primary and secondary education in Elmalı, for studying Islam sciences, in 1885, Yazır went to İstanbul which was the capital city of Ottoman Empire at that time. He completed his university education in Bayezid Madrasah. Then he competed posterrior education in Mekteb-i Nuvvab and became a Qadi (judge). He also received Islamic calligraphy courses from Sami Efendi and Bakkal Arif Efendi. He learned Arabic, Persian, and French during his education. His was as fluent in French as in Arabic. He translated some French books to Turkish.

Muhammed Hamdi Yazır became a Qadi (judge) via competed his education in Mekteb-i Nuvvab. He worked as a full time academic in Bayezid Madrasah from 1905 to 1908. Then, he get in the service of Sheikh ul-Islam and started lecturing in Mekteb-i Mülkiye, Medreset-ul-Vaizin and Süleymaniye Madrasah. He gave "judgement of estates in mortmain" courses in Mekteb-i Mülkiye, logic courses in Süleymaniye Madrasah and fiqh (Islamic jurisprudence) in Medreset-ul-Vaizin (madrasah of preachers). He also served in the Darü'l-Hikmeti'l-İslâmiye (high council of consultation working for Sheikh ul-Islam). After a while he became the president of the council.

When he was working in service of Sheikh ul-Islam, Committee of Union and Progress prepared a coup against the Sultan Abdul Hamid II. Yazir wrote the symbolic fatwa for the termination of the reign of Abdul Hamid II. He became a member of the senate of the Ottoman Parliament for Antalya. He strongly opposed Committee of Union and Progress which hold a nationalist and militarist position.

When the republic was founded he was giving logic courses in Medrese-t-ül Mütehassisin (a postgraduate school). When Kemal's government abolished the madrasahs he withdrew into solitude. He studied for 20 years in solitude. He died of cardiac deficiency on 27 May 1942 in Erenköy district of Istanbul (Al-Fatiha). He is buried in Sahrayı Cedit Mezarlığı (Sahrayı Cedit Cemetery) in Kadıköy in İstanbul. 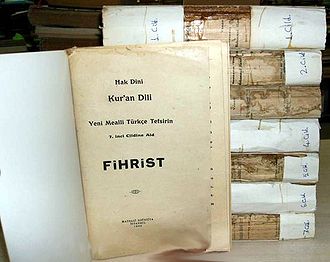 1935 print of Hak Dini Kur'an Dili. A Qur'anic exegesis and translation of Qur'an in Turkish

Muhammed Hamdi Yazır worked on logic, philosophy, Islamic jurisprudence, and Islamic theology. In his philosophical works he opposed Western opinion that human mind is enough for reaching absolut truth. He hold the position that faith and mind togather are capable of comprehending truth. He worked on Qur'anic exegesis in Maturidi context. He also worked on a dictionary of law. Additionally he translated western papers into Turkish.