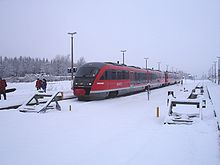 The Müglitz Valley Railway (Müglitztalbahn) is a German railway in Saxony. Branching off the Elbe Valley Railway, it connects the town of Heidenau near Dresden with the spa town of Altenberg in Erzgebirge (Ore Mountains). The total length is 38 km, with a total incline of 634 meters[1]. The scenic track follows primarily the Müglitz river, passing the towns of Dohna, Glashütte and Geising. The railway was initially a narrow gauge railway, which was opened on November 17, 1890. Between 1935 and 1938, the tracks were graded and converted to standard gauge[1].