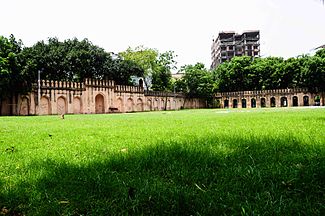 The Mughal Eidgah is loctated at Saat Masjid road, in the Dhanmondi residential area of Dhaka, Bangladesh. This urban open space has been in use for Eid celebrations since it was built in 1640 CE. Conservationist architect Abu Sayeed M Ahmed wtote, "This Eidgah is the oldest surviving Mughal monument in Dhaka city. There is no second one with the architectural forms and features similar to it."

Popularly known as "Dhanmondi Eidgah", the 368-year-old structure, located at Dhanmondi 6A, Dhaka, is a listed archaeological site of the Department of Archaeology. It was built during the Mughal era and has historical, architectural and heritage value.

The Mughal Eidgah is a monumental structure built during the Mughal Empire. The Mughal subehdars and diwans living in this land used to come to the Eidgah for Eid prayers twice a year. The fish traders used to organise fairs here where thousands of people used to gather and have grand feasts. Popularly known as Dhanmondi Eidgah, the 368-year-old structure is an example of Mughal architecture.

Founded in the 4th century, Eidgah (Dhaka) first received principal status in 1610, when the Mughals transferred the capital from Rajmahal to Dhaka, and renamed it Jahangirnagar. During the Mughal period, Dhaka became the chief commercial emporium and capital. The center of a princely state, it is reputed to have a thousand mosques.

Historical Eidgah (Dhaka) was constructed by Mir Abul Qasim, Dewan by the order of Prince Shah Shuja, Mughal viceroy of Bengal, second son of Emperor Shahjahan. Shuja appreciated art, and despite political events, prosperity prevailed in the Subah and its prime city Dhaka. His reign remained known for another period of prolific building activities, proven by remnants of varieties of building types in Dhaka, like the Katra and Eidgah, and course few mosques. A Persian inscription records the date of its erection in 1640 CE (1050 AH).

True to traditional siting, the Mughal Eidgah was just at the outskirts of the city. The Mughal structure was erected possibly nearer the river flowing through the west, near a place named Company Ghat. The river Turag, a tributary of Buriganga, has now silted away. The late-Mughal and colonial settlements expanded along it in the Hazaribag-Rayerbazaar, with many small late–Mughal and British Colonial period structures. The Eidgah for Eid congregating was a platform measuring 148’ x 137’ in size raised from the surrounding land by 4-6 feet. It was oblong in plan , with thick brick walls enclosing the countryard on all side except east.The 15 feet high west wall, the only surviving part of it, has a 5 feet deep four –centred and stilted arched semi-octagonal Mihrab with an inscription on top.It was decorated with multi-cusped arch and flanked by shallow subsidiary niches , three on each side.

The surrounding wall was possibly partly perforated ; these had a row of battlement cresting with additional elements decorating the corners , the projected parts of the walls and the diminishing sections on the western wall , like in a fort .Though these had structural reason to be there , but their placement and shapes contributed to the aesthetic too.

During Mughal period, a river branch flowed beside the Eidgah connected the river near Saat Masjid. The Mughal Subehdars and Diwans living in this land used to come to the Eidgah for Eid prayers. People still gather at the place for Eid prayer congregation.The Eidgah spreads over around 3.5 bighas of land.

The oldest surviving Mughal-era Eidgah here faces a threat from unplanned construction of a six-storeyed mosque on its premises, a media report said. The Dhanmondi Eidgah mosque committee is constructing the building without approval from Rajdhani Unnayan Kartripakkha (Rajuk) as required by the Building Construction Act and Dhaka Metropolitan Building Rules. Architect Sayeed expressed the fear that the Eidgah structure may have been weakened by the rig vibration during construction of the new building. He also said, "It is a very bad choice of site for construction of a huge building, as it has spoilt the elegant look of the heritage monument."

Dhaka Metropolitan Building Rules of 2008 requires that any development within 250-metre radius of an archaeological and heritage site must have the permission of government’s high-powered Nagar Unnayan Committee before approaching the Rajuk Building Committee for plan approval. We are going to demolish the old mosque to complete the new one,’ said Atiqul Habib, secretary general of Dhanmondi Eidgah Mosque Committee. The monument has also been overshadowed by a grocery shop that a mosque committee turned into an 'Islamic Research Centre' - within ten feet of Eidgah's central Mihrab (central prayer-niche).

Devotees of Eid-congregation and the aspiring visitors now have to take a detour around the new mosque to get to the Mughal Eidgah.