Justice Dr Mufti Syed Shuja’at Ali Qadri (Urdu: حضرت علامہ مفتی سید شجاعت علی قادری ) (January 1941 – January 27, 1993) was a member of the Pakistani Council of Islamic Ideology and a renowned scholar of Islamic Sciences and modern science, and had a deep and authoritative understanding of traditional and modern Arabic language.[1] He involved himself with the work of authoring and publication besides holding various offices and wrote a number of texts.[2] He authored a number of books on Islamic fiqh (Sharia legal commentary), economics and inheritance, and also translated some notable books from Arabic to Urdu.[3]

Syed Shujaat Ali Qadri was born in Uttar Pradesh, India, in January 1941. He was the son of Syed Masood Ali Qadri, who served in the office of Afta (Islamic jurisprudence) at the Jamia Islamia Anwar-ul-Uloom, a madrasah in Multan, Punjab (Pakistan). Qadri was the second eldest child of his father; his brothers are:[4]

Qadri was the father of three sons and a daughter.[4] 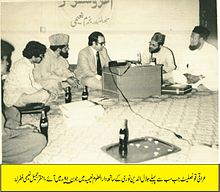 Qadri got his initial education from Madersahe Arabia Hafiziya Saadiya, District Dadu, Aligarh. He learned Nazirah Quran Kareem from Hafiz Ghulam Rabbani, who was the brother of the teacher of Allama Ghulam Jilani Meerthi and Allama Hafiz Shah Ahmad Noorani Siddiqi. He then, at the age of 10, migrated with his parents in 1951 to Multan, Pakistan and began his education in Madersah Anwar-ul-Ulum and eventually completed his darse nizami from this institute. He also received Ijaza or authority in the Qadri tariqa of Sufism from Pir Kifayat Ali Shah.[4]

He had the opportunity to learn from the following notable scholars:

He graduated from the Jamia Islamia Anwar-ul-Uloom, Multan at the age of eighteen. Besides this he achieved the following qualifications: 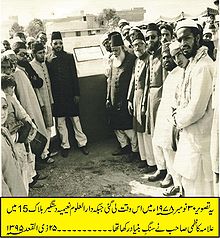 Qadri ennobled, by his teachings and services, Karachi after graduating and worked as a teacher and mufti in different institutes or madaris of Ahle Sunnat. He served as the Head of Department and Mufti in Darul Uloom Amjadiya from 1960 to 1973.[3] Thereafter he established Darul Uloom Naeemia[6] with the assistance of some of his friends. The foundation stone of Darul Uloom Naeemia, Dastager, Block 15 was laid by Ahmad Saeed Kazmi along with other prominent scholars and preachers of Ahle Sunnat. Thereafter, from 1973 to 1983, he held the offices of Sheikh ul Hadith and Mufti in Darul Uloom Naeemia, Karachi.[3]
During the late 1980s and early 1990s he presented several lectures on the Quran and tafsir to his viewers in religious television programs aired on Pakistan Television Corporation.[citation needed] He remained as the sheikh-ul-hadith, mufti and founding member trustee of Darul Ulum Naeemia till his death. Qadri also served as a Lecturer in Liaqat Government College, Karachi, for 12 years and as a member of University of Karachi Syndicate for two years.[2] 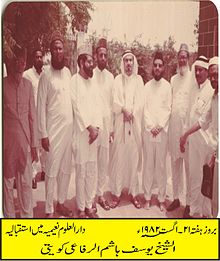 Following is a list of his students who have now become prominent scholars of Ahle Sunnat wal Jamaat[7]:

Besides serving the offices of Sheikh-ul-Hadith and Afta at Darul Ulum Naeemia, for ten years,[12] from 1973 to 1983;[3] he remained as a judge of Federal Shariat Court, Pakistan for six years from 1983 till 1989.[13] He was appointed as Aalim Judge of the Federal Shariat Court on July 2, 1983 and perforemd his duties till July 1, 1989.[3] He also served as a member of Council of Islamic Ideology, Pakistan and as a member of Karachi University Syndicate.[2]

He authored and translated a significant body of work[14]:

Shujaat was an esteemed and visionary scholar of Ahle Sunnat wal Jamaat, Pakistan. He was regarded as a great Muhaddith and a Faqih of high caliber[19] and was respected by the scholars of major sects of Islam and people of Pakistan.[20] Shujaat's colleagues and students were often observed praising him. Muhammad Abdul Hakim Sharaf Qadri, a prominent scholar of Ahle Sunnat wal Jamaat,[21] glowingly described his character: 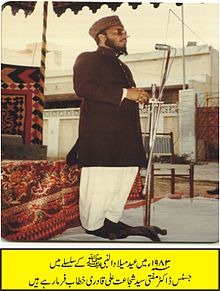 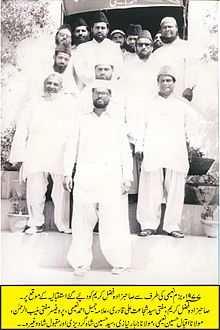 On the 24th of January 1993 Qadri went on an official tour of Indonesia with a delegation of the Ministry of Population Control. It was during this tour that on the fourth Shabaan 1413 Hijri, January 27, 1993 he expired of a sudden heart attack in Jakarta.[24] Qadri's funeral procession was led by Allama Hamid Saeed Kazmi s/o Allama Ahmad Saeed Kazmi, then MNA of JUP, in Jakarta. It was estimated that approximately fifty thousand people attended the procession along with the ambassadors and religious scholars from Islamic countries, Indonesian officials and Pakistan's foreign delegation in Indonesia.[1][25]
His body was brought back to Pakistan on February 1, 1993, by Singapore Airlines,[26] where he was buried in Darul Uloom Naeemia, Karachi. Qadri's funeral procession, in Karachi, was led by his brother, Allama Syed Saadat Ali Qadri, in the presence of a large number of people, journalists, politicians and scholars from all schools of thought. An estimated crowd of fifteen thousand attended his funeral procession.[27] It was a unique and emblematic funeral in the history of Karachi.[28] His tomb is located inside the Daru Uloom Naeemia.[29]

Syed Shujaat Ali Qadri's death was termed as a national tragedy and a great loss of eminent religious scholar of Islam for the people of Pakistan.[30][31] Various national leaders, scholars, Ulemas, honorable Judges as well as Federal Ministers expressed their feelings of grief and condolences[32] by extending rich tributes to the deceased and highlighting his services for the nation.[19][33]

Former Prime Minister of Pakistan, Muhammad Nawaz Sharif, expressed his shock and grief over Qadri's death in the following manner:

He also eulogised the singular scholarly qualities and vast knowledge of Islamic Shariah of Qadri.[34] Former Prime Minister of Pakistan and the opposition leader in the National Assembly of Pakistan at that time, Benazir Bhutto, expressed her deep sorrow and grief over his demise: