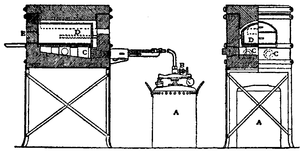 An Automatic Oil Muffle Furnace, circa 1910. Petroleum is contained in tank A, and is kept under pressure by pumping at intervals with the wooden handle, so that when the valve B is opened, the oil is vaporized by passing through a heating coil at the furnace entrance, and when ignited burns fiercely as a gas flame. This passes into the furnace through the two holes, C, C, and plays under and up around the muffle D, standing on a fireclay slab. The doorway is closed by two fireclay blocks at E.

A muffle furnace (sometimes, retort furnace) in historical usage is a furnace in which the subject material is isolated from the fuel and all of the products of combustion including gases and flying ash.[1] After the development of high-temperature electric heating elements and widespread electrification in developed countries, new muffle furnaces quickly moved to electric designs.[2]

Today, a muffle furnace is (usually) a front-loading box-type oven or kiln for high-temperature applications such as fusing glass, creating enamel coatings, ceramics and soldering and brazing articles. They are also used in many research facilities, for example by chemists in order to determine what proportion of a sample is non-combustible and non-volatile (i.e., ash). Some digital controllers allow RS232 interface and permit the operator to program up to 126[citation needed] segments, such as ramping, soaking, sintering, and more. Also, advances in materials for heating elements, such as molybdenum disilicide offered in certain models by Vecstar, can now produce working temperatures up to 1800 degrees Celsius, which facilitate more sophisticated metallurgical applications.[citation needed]

The term muffle furnace may also be used to describe another oven constructed on many of the same principles as the box type kiln mentioned above, but takes the form of a long, wide, and thin hollow tube used in roll to roll manufacturing processes.[citation needed]

Both of the above mentioned furnaces are usually heated to desired temperatures by conduction, convection, or blackbody radiation from electrical resistance heating elements.[citation needed] Therefore there is (usually) no combustion involved in the temperature control of the system, which allows for much greater control of temperature uniformity and assures isolation of the material being heated from the byproducts of fuel combustion.