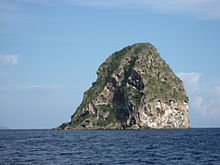 Diamond Rock, off the coast of Martinique

Diamond Rock (Rocher du Diamant) is a 175 meter (574 feet) high[1] basalt island located south of Fort-de-France, the main port of the Caribbean island of Martinique. The uninhabited island is about three kilometers from Pointe Diamant. The island gets its name from the reflections that its sides cast at certain hours of the day, which evoke images of a precious stone. Its claim to fame is the role that it played in the Napoleonic Wars.

The Rock occupies a strategic position at the north end of the St. Lucia Straits. Possession of the Rock permits interdiction of navigation between Martinique and its southern neighbor, St Lucia.

In September 1803 Commodore Sir Samuel Hood sailed to the Rock aboard Centaur (Captain Murray Maxwell). Hood had received the assignment to blockade the bays at Fort Royal and Saint Pierre, Martinique.

Centaur was lying at anchor in Fort Royal Bay, Martinique, on the morning of 1 December when lookouts sighted a schooner with a sloop in tow about six miles off making for Saint Pierre. Hood sent his advice boat, the Sarah, after the sloop, and had Maxwell sail Centaur in pursuit of the schooner. After a pursuit of some 24 leagues, Centaur captured the schooner, which turned out to be the privateer Ma Sophie, out of Guadeloupe. She had a crew of 45 men, and was armed with eight guns, which she had jettisoned during the chase.[2][Note 1]

Hood took Ma Sophie into service as a tender, charging her captain, Lieutenant William Donnett, with watching the channel between Diamond Rock and Martinique for enemy vessels. Donnett made frequent visits to the Rock to gather the thick, broad-leaved grass to be woven into sailors' hats, and a spinach-like plant called callaloo, that when boiled and served daily, kept the crews of Centaur and Ma Sophie from scurvy and was a nice addition to a menu too long dominated by salt beef.[3]

Aided by surprise and by calm weather, the British were able to run lines ashore and hoist two 18 pounder[4] cannons to the summit of the Rock.[1] The British hastily built fortifications and supplied the position with food and water for a garrison of two lieutenants and 120 men under the command of Lieutenant James Wilkes Maurice, Hood's First lieutenant.(In a contemporary print of the main characters involved his name is spelt Morris). Hood officially commissioned the Royal Navy-garrisoned island as a sloop HMS Diamond Rock. A six-gun sloop, designated Fort Diamond, supported the fort.[5] In honor of his Admiral, Maurice designated as "Hood Battery" the one 24-pounder that he placed to fire from a cave halfway up the side of the Rock. The British also placed two 24-pounder guns in batteries ("Centaur" and "Queen's") at the base of the Rock, and a 24-pounder carronade to cover the only landing-place.[Note 2] One account puts two 24-pounders on the summit, but all other accounts put 18-pounders there.[Note 3] Unfortunately, at some point while this was going on, Ma Sophie blew up for unknown reasons, killing all but one of her crew.[9]

With work complete by 7 February Hood decided to formalise the administration of the island, and wrote to the Admiralty, announcing that he had commissioned the rock as a sloop, under the name Fort Diamond.[10] Lieutenant Maurice, who had impressed Hood with his efforts while establishing the position, was rewarded by being made commander.[10]

Caves on the Rock served as sleeping quarters for the men; the officers used tents. A court martial would reprimand Lieutenant Roger Woolcombe at Plymouth on 7 December 1805 for "conduct unbecoming a gentleman" for having messed (eaten) at the top of the Rock with part of the ship's company.[11]

The troops used pulleys and ropes to raise supplies to the summit. To augment their uncertain food supply, the garrison had a small herd of goats and a flock of guinea hens and chickens that survived on the meager foliage. The British also established a hospital in a cave at the base of the Rock that became a popular place to put sailors and marines recovering from fevers or injuries.[12]

Just before Centaur left the Rock, a party of slaves made a clandestine visit at night to trade fruits and bananas. They brought the news that a French Lieutenant Colonel of Engineers had arrived at their plantation to survey the heights opposite for a mortar battery with which to shell the Rock. One of the slaves had been sold by his English owner to the French when the owner left the islands. He did not like his new master and claimed the protection of the British flag. Hood granted him that protection, and promised that the man could serve in the Royal Navy as a free man in return for guiding a landing party to his now former master's house. A 23-man landing party, including the guide, and under Lieut. Reynolds, landed at midnight, walked the four kilometers to the plantation house, and took the engineer and 17 soldiers prisoner, before returning safely to Centaur. Apparently the Lieutenant Colonel was the only engineer on Martinique and so no mortar battery materialized.[13]

On June 23, 1804, whilst the Fort Diamond was on a provisioning expedition at Roseau Bay, St. Lucia, a French boarding party from a schooner came up to her in two rowboats, boarding her at night while most of the crew were asleep below decks. A subsequent court-martial aboard HMS Galatea at English Harbour, Antigua, convicted Acting Lt. Benjamin Westcott of allowing his vessel to be captured.[14] The Board dismissed him from the Service, never to be permitted to serve in the Navy again.[4][15] (Three years later he became an American citizen.)

For 17 months the fort was able to harass French shipping trying to enter Fort-de-France.[4][16] The guns on the Rock completely dominated the channel between it and the mainland, and because of their elevation, were able to fire so far out sea as to force vessels to give it a wide berth, with the result that the currents and strong winds would make it impossible for them to fetch in Port Royal.[17] During this time the French troops on Martinique made several unsuccessful attempts to retake the Rock.

When Admiral Villeneuve embarked on his 1805 voyage to Martinique, he was under orders from Napoleon to recapture Diamond Rock. The French-Spanish combined naval force of sixteen ships[18] under French Captain Cosmao-Kerjulien attacked Diamond Rock. Between 16 May and 29 May, the French fleet completely blockaded the Rock. On the 25th, the French were able to cut out from under Maurice's guns a British sloop that arrived from St. Lucia with some supplies.[19]

The actual assault came on 31 May and the French were able to land some troops on the Rock. Maurice had anticipated the landing and had moved his men from the indefensible lower works to positions further up, and on the summit. Once the French landed, British fire trapped the landing party in two caves near sea level.[20]

Unfortunately for the garrison, their stone cistern had cracked, due to an earth tremor, so they were short of water, and after exchanging fire with the French, they were also almost out of ammunition.[21] After enduring a fierce bombardment, Maurice surrendered to the superior force on June 3, 1805,[18] having resisted two French seventy-fours, a frigate, a corvette, a schooner, and eleven gunboats.[1] The British lost two men killed and one wounded, and the French 50 dead and wounded, and three gunboats. The French took the garrison of 107 men as prisoners, splitting them between their two 74-gun ships of the line, Pluton and the ex-British Berwick.[22]

The prisoners were repatriated to Barbados by 6 June.[23] The subsequent court-martial of Commander Maurice for the loss of his ship, i.e., the fort, exonerated him and commended him for his defence.

The Battle of Diamond Rock in literature

There is a now obscure poem of some forty four-line stanzas based on the incident, titled "The Diamond Rock".[24]

The author Sea Lion (the Pseudonym of Geoffrey Bennett, a career naval officer, based his 1950 novel The Diamond Rock on the 1804 event. So did Dudley Pope in his 1976 novel Ramage's Diamond.

The Royal Navy still regards "HMS Diamond Rock" as being in commission. Therefore, HM Ships are required, when passing, to show due respect. (Personnel on the upper deck to stand at attention and face the Rock whilst the Bridge salutes.)[citation needed]

The rock is a volcanic plug, a remnant of the strong volcanic activity that affected the region some one million years ago. However, a Captain Hansen of the Norwegian steamship Talisman reported that on 13 May 1902, he observed what he took to be a volcanic eruption from a hole in the rock. This was at the time of the devastating volcanic eruption of Mount Pelée that destroyed Saint-Pierre. Hansen did not investigate further.[25]

Like the other 47 islets that circle Martinique, the Rock has its own ecological characteristics. It is sunnier than the main island, drier, and subject to a long seasonal dry period. Today it is covered in undergrowth and cacti.

Relatively inaccessible and inhospitable, the island is uninhabited, which has permitted it to remain a sanctuary for a species that had been believed to be extinct.[26] A nature survey has suggested that Diamond Rock is probably the last refuge for a species of reptile once endemic to Martinique, the Couress grass snake (Liophis cursor).[27][28]

Below water the Diamond Rock cavern, a deep triangular cave, is a popular attraction for scuba divers. The cave is said to contain prolific quantities of beautiful sea fans and corals, though strong currents make diving the island a risky venture.

The author John Fine reports that while diving he found one of the Rock's cannon that the French had toppled from the summit.[29]

This article incorporates information from the equivalent article on the French Wikipedia.
Citations