Scouting and Guiding in Victoria

Scouting and Guiding in Victoria

Scouts Victoria is a volunteer-based Non-profit organization that caters to the needs of young people throughout the state, providing them with educational and fun activities from the ages of 6 to 26, although adult leaders are often much older and still take advantage of these opportunities. Scouts also offer much support to their local communities at their own expense, from working at the local council festival to helping in the aftermarth of the 2009 Black saturday bushfires and 2011 Victorian floods.

Scouting appears to have started as early as 1907 in an informal way:

"The cradle of Scouting in Victoria was the Tooronga Rd. State School, Caulfield; where in late 1907 one of the pupils, Roy McIndoe, received from a friend in England, who had been a member of the experimental camp at Brownsea Island, some pamphlets which had been issued by the Chief. These he showed to his mates who immediately got red shirts, their father's old felt hats, formed 'patrols' and 'whooped round the place like Red Indians'. Later in 1908 when they received the first copies of Scouting for Boys, they settled down to genuine Scouting."[1]

The Boy Scouts Association, Victorian Branch was incorporated in 1912 by Royal Charter of George V and the 1932 Boy Scout Association Act.[3]

Victoria hosted the Australian Scout Jamboree (AJ2007) from 2–13 January 2007 in Elmore in regional Victoria. It was the first official worldwide Scouting event to celebrate the 100 years of Scouting.

The Branch is divided into 11 Regions: Bays, Eastern, Geelong, Lerderderg, Melbourne, Mt Dandenong, Northern, North West, Sunraysia, Western, West Coast. In early 2010, the Branch reorganised the Regions in and around the Melbourne Metropolitan Area, to align them with the State Government's main growth corridors. The new regions came into effect in April 2010, with the Rover Section now operating within the new region structure as of their July AGM's.[citation needed]

The Victorian Cuboree is held every three years at Gilwell Park during the Easter school holidays. However in 2010 it will be held in the September School holidays.[4]

Stradbroke Cup is a hike and camp event for the Scout section, also held on the Easter long weekend, though it is held in various locations around the state, to allow the maximum number of participants to take part. The cup is named after George Rous, 3rd Earl of Stradbroke, Governor of Victoria 1921-1931.[5]

Hoadley Hide is one of the main events on the Venturer Scouts calendar in Victoria. It is also a hike camp that is run annually on the Easter long weekend. Victorian Gathering is the main way for Venturers to end the year, held on the first weekend in December, its location rotates every two years.[citation needed]

Surfmoot takes place on the Australia Day long weekend, and is the beginning to the Rover Year, a sun, sea and beach event held in Anglesea. It is the largest annual Rover event in Australia. Mudbash is the premier event of Rover Motorsport, taking place on the Queen's Birthday long weekend at Mafeking Rover Park. Non-rover visitors are welcome on the Sunday. Mudbash also has its own on-site Radio Station, Mud FM 94.9 Which Broadcasts all weekend, providing commentary on the racing[6]

Scouthike takes place on the second weekend in November, and is a hike event for the Scout section]]. This event changes location each year, with the most recent event taking place at Tallarook State Forest, north of Melbourne. This event regularly has more than 300 participants, and almost 100 leaders, Rovers and Venturer Scouts helping out with check points and activities, scoring and communications, as well as running the sleep points.[citation needed] 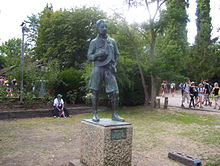 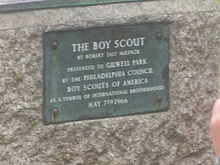 Gilwell Park is a campsite and activity centre for Scouting groups in Victoria, Australia. It is also a training and conference centre for Scout Leaders. The 250 acres (1.01 km2) property is located on both sides of the Launching Place Road, Gembrook. One of the founders and the Warden from 1924 until his death in 1947 was Charles "Arch" Hoadley, whom the former Hoadley Region was named after.

Gilwell Park was named after the original Gilwell Park in London. In 1920, the first leader training course was held at what would become Gilwell Park, after it was donated to the Scout Association.

Robert Baden-Powell, founder of the Scouting Movement, approved the naming of the new Training Centre and visited it twice, in 1931 and again in 1935. One of the features of the park is the Chief's Gate, built specially for Baden-Powell, which guards the entrance to The Chief's Approach. Other locations include The Gauntlet Commando course — built for the World Rover Moot and the Lochan, a lake that is famously freezing all year round — even in the depths of summer. The EM Derrick Pack Holiday Centre, a bunkhouse and hall/kitchen that is primarily used by Cub Packs for their Pack Holidays, as well as for training courses, and the Hoadley and deMolnar Training Areas are dedicated to Wood Badge Training, though like most buildings they are open for hiring.

Gilwell Park is home to the tri-annual Victorian Cuboree, a five-day camp that hosts thousands of Cub Scouts. Hundreds of Leaders, Venturers, Rovers also attend and provide much worthwhile service. In September 2010 Cuboree 6 was held in the grounds with 2500 Cubs and 300 Venturers attending.

The Warden of Gilwell Park has the rank of a full Branch Commissioner and is assisted by a staff of two paid Rangers who live on site.

Victoria is also home to several scout groups that cater mostly to specific ethnic groups, such as 6th Box Hill (Greek) and The 5th Melbourne Scout Group, also known as the 1st Latvian Scout Group and is a member of both Scouts Australia and the Latvian Scout Movement. It is also part of ESGAV - the Ethnic Scout and Guide Association.[7]

Scout Heritage Victoria,[8] is located in a small cottage known as Sithen Brownsea, in Como Avenue, South Yarra, to preserve the history of the Scout Movement. It was started in the early 1970s when the Chief Commissioner appointed Ian Croll as archivist. The current head of the Heritage Centre is Sue Tanck, Branch Commissioner for Heritage.

Items in the Heritage Centre's collection of approximately 20,000 include a copy of the 1912 Royal Charter incorporating The Scout Association in the UK and Dominions, every book published by Baden Powell including Sketches in Mafeking and East Africa, of which only two other copies are known to exist, memorabilia from every Australian Jamboree, an exhibition of past uniforms including a total of 700 scarves, and artefacts from the Changi Rover Crew, which, due to their value, are unfortunately not on general display.

The Florence Nightingale Girl Aids were established in 1909, by Wynifred Gipps, and were recognised as Baden-Powell Girl Guides in 1911.[9] Originally refused a warrant as a Guide Leader as being too young, when Gipps reached the age of 21, in April 1912, she became the first warranted Guide Leader in Australia.[10] On 6 February 1911, the 1st Hawthorn Company was formed, led by Louie Kerr. This Company claims to the first in Australia with the full name "Baden-Powell Girl Guides". A Guiding organisation for Victoria was formalised in 1921 and the first State Commissioner was Lady Stradbroke.

Girl Guides in Victoria are taking the pledge to Stand Against Poverty, and meet and exceed the Millennium Development Goals.[11]

By 1926, the State Badge was a sprig of wattle in enamel. An appeal was made for alternative designs and in 1927, a new design was chosen. Margaret Moore, a Guider and Commissioner suggested the design and it was drawn by Dorothea Holtz.[12] The design was the Southern Cross on a blue lozenge surmounted by a crown. The same badge is currently still in use.

Several of Girl Guides Victoria's properties are owned and/or managed in conjunction with Scouts Australia. These include Lockington, Bungle Boori and the Guide-Scout Water Activities Centre. The headquarters was named the Joyce Price Centre in honour of the only Australian to be chairman of the World Association of Girl Guides and Girl Scouts.

Britannia Park is a campsite belonging to Girl Guides Victoria. It is located near Yarra Junction in Victoria, Australia. It is 72 km east of Melbourne. The site covers 42 acres (170,000 m2), although the original purchase was smaller.

Burnet Park is a campsite located between Traralgon and Morwell. There are three campsites and Illangi - the house on the hill, with accommodation for 29. There is also a tree house platform.

The site was part of Burnet's farm and was donated to the Guiding movement by the Burnet family for camping and outdoor recreation.

Women of Note and the Blue and Gold Society

The purpose of the Blue and Gold Society is to promote Guiding in the community. This is achieved by events such as cocktail parties with guest speakers. Membership of the society is open to both men and women.

Women of Note is a group of exceptional women, often professional women or business women, who support Girl Guides Victoria. They share their skills through the Girl Guides Victoria Mentor Program. Women of Note also hold Mentor Breakfasts across regional and metropolitan Melbourne. At these breakfasts, Year 11 students meet with the group to develop career networks.

Gang Shows and other theatrical experiences