Squamous cell carcinoma (SCC or SqCC), occasionally rendered as "squamous-cell carcinoma", is a histologically distinct form of cancer. It arises from the uncontrolled multiplication of malignant cells deriving from epithelium, or showing particular cytological or tissue architectural characteristics of squamous cell differentiation, such as the presence of keratin, tonofilament bundles, and/or desmosomes).

Squamous cell carcinoma is one of the most common cancers in humans and other animals, and usually arises from mutated ectodermal or endodermal cells lining body cavities. Therefore, it can develop in a large number of organs and tissues, including the skin, lips, mouth, esophagus, urinary bladder, prostate, lung, vagina, and cervix, among others.

Despite the common name, squamous cell carcinomas arising in different body sites can show tremendous differences in their presenting signs and symptoms, natural history, prognosis, and response to treatment.

Though the use of these terms has been decreasing in the literature, SqCC is still sometimes referred to as "epidermoid carcinoma" and "squamous cell epithelioma".

Cancer can be considered a very large and exceptionally heterogeneous family of malignant diseases, with squamous cell carcinomas comprising one of the largest subsets.[1][2][3]

The International Classification of Diseases for Oncology (ICD-O) system lists a number of morphological subtypes and variants of malignant squamous cell neoplasms, including:[4]

Other variants of squamous cell carcinoma are recognized under other systems, such as:

All squamous cell carcinoma lesions are thought to begin via the repeated, uncontrolled division of cancer stem cells of epithelial lineage or characteristics. Accumulation of these cancer cells cause a microscopic focus of abnormal cells that are, at least initially, locally confined within the specific tissue in which the progenitor cell resided. This condition is called squamous cell carcinoma in situ, and it is diagnosed when the tumor has not yet penetrated the basement membrane or other delimiting structure to invade adjacent tissues. Once the lesion has grown and progressed to the point where it has breached, penetrated, and infiltrated adjacent structures, it is referred to as "invasive" squamous cell carcinoma. Once a carcinoma becomes invasive, it is able to spread to other organs and cause a metastasis, or "secondary tumor", to form.

Symptoms are highly variable depending on the involved organs.

SCC of the skin begins as a small nodule and as it enlarges the center becomes necrotic and sloughs and the nodule turns into an ulcer.

Human papilloma virus (HPV) has been associated with SqCC of the oropharynx, lung,[5] fingers,[6] and anogenital region.

Squamous cell carcinoma is the second-most common cancer of the skin (after basal cell carcinoma but more common than melanoma). It usually occurs in areas exposed to the sun. Sunlight exposure and immunosuppression are risk factors for SqCC of the skin, with chronic sun exposure being the strongest environmental risk factor.[7] The risk of metastasis is low, but is much higher than with basal cell carcinoma. Squamous cell cancers of the lip and ears have high rates of local recurrence and distant metastasis (20–50%).[8] Squamous cell cancers of the skin in individuals on immunotherapy or suffering from lymphoproliferative disorders (i.e. leukemia) tend to be much more aggressive, regardless of their location.[9]

Squamous cell carcinoma are generally treated by surgical excision or Mohs surgery. Non-surgical options for the treatment of cutaneous SqCC include topical chemotherapy, topical immune response modifiers, photodynamic therapy (PDT), radiotherapy, and systemic chemotherapy. The use of topical therapy, such as Imiquimod cream and PDT is generally limited to premalignant (i.e., AKs) and in situ lesions. Radiation therapy is a primary treatment option for patients in whom surgery is not feasible and is an adjuvant therapy for those with metastatic or high-risk cutaneous SqCC. At this time, systemic chemotherapy is used exclusively for patients with metastatic disease.[citation needed] 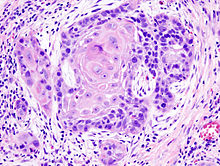 Ninety percent [10] of cases of head and neck cancer (cancer of the mouth, nasal cavity, nasopharynx, throat and associated structures) are due to squamous cell carcinoma. Symptoms may include a poorly healing mouth ulcer, a hoarse voice or other persistent problems in the area. Treatment is usually with surgery (which may be extensive) and radiotherapy. Risk factors include smoking, alcohol consumption and hematopoietic stem cell transplantation.[11] In addition, recent studies show that about 25% of mouth and 35% of throat cancers are associated with HPV. The 5 year disease free survival rate for HPV positive cancer is significantly higher when appropriately treated with surgery, radiation and chemotherapy as compared to non-HPV positive cancer, substantiated by multiple studies including research conducted by Dr. Maureen Gillison, et al. of Johns Hopkins Sidney Kimmel Cancer Center.

Esophageal cancer may be due to either squamous cell carcinoma (ESCC) or adenocarcinoma (EAC). SCCs tend to occur closer to the mouth, while adenocarcinomas occur closer to the stomach. Dysphagia (difficulty swallowing, solids worse than liquids) and odynophagia are common initial symptoms. If the disease is localized, esophagectomy may offer the possibility of a cure. If the disease has spread, chemotherapy and radiotherapy are commonly used.

Photograph of a squamous cell carcinoma. Tumour is on the left, obstructing the bronchus (lung). Beyond the tumour, the bronchus is inflamed and contains mucus.

When associated with the lung, it often causes ectopic production of parathyroid hormone-related protein (PTHrP), resulting in hypercalcemia.

When squamous cell carcinoma in situ (Bowen's disease) is found on the penis, it is called erythroplasia of Queyrat.[12] This type of cancer responds very well to imiquimod[citation needed].

When associated with the prostate, squamous cell carcinoma is very aggressive in nature. It is difficult to detect as there is no increase in prostate specific antigen levels seen; meaning that the cancer is often diagnosed at an advanced stage.

Vaginal squamous cell carcinoma spreads slowly and usually stays near the vagina, but may spread to the lungs and liver. This is the most common type of vaginal cancer.

Diagnosis is via a biopsy. For the skin, look under skin biopsy.

The pathological appearance of a squamous cell cancer varies with the depth of the biopsy. For that reason, a biopsy including the subcutaneous tissue and basalar epithelium, to the surface is necessary for correct diagnosis. The performance of a shave biopsy (see skin biopsy) might not acquire enough information for a diagnosis. An inadequate biopsy might be read as actinic keratosis with follicular involvement. A deeper biopsy down to the dermis or subcutaneous tissue might reveal the true cancer. An excision biopsy is ideal, but not practical in most cases. An incisional or punch biopsy is preferred. A shave biopsy is least ideal, especially if only the superficial portion is acquired.

Mohs surgery is frequently utilized; considered the treatment of choice for squamous cell carcinoma of the skin, physicians have also utilized the method for the treatment of squamous cell carcinoma of the mouth, throat, and neck.[14] An equivalent method of the CCPDMA standards can be utilized by a pathologist in the absence of a Mohs-trained physician. Radiation therapy often used afterward in high risk cancer or patient types.

Electrodesiccation and curettage or EDC can be done on selected squamous cell carcinoma of the skin. In areas where SCC's are known to be non-aggressive, and where the patient is not immunosuppressed, EDC can be performed with good to adequate cure rate.

Imiquimod (Aldara) has been used with success for squamous cell carcinoma in situ of the skin and the penis, but the morbidity and discomfort of the treatment is severe. An advantage is the cosmetic result: after treatment, the skin resembles normal skin without the usual scarring and morbidity associated with standard excision. Imiquimod is not FDA-approved for any squamous cell carcinoma.

Incidence of squamous cell carcinoma varies with age, gender, race, geography, and genetics. The incidence of SCC increases with age and the peak incidence is usually around 66 years old. Males are affected with SCC at a ratio of 2:1 in comparison to females. Caucasians are more likely to be affected, especially those with fair Celtic skin, if chronically exposed to UV radiation. There are also a few rare congenital diseases predisposed to cutaneous malignancy. In certain geographic locations, exposure to arsenic in well water or from industrial sources may significantly increase the risk of SCC.[7]