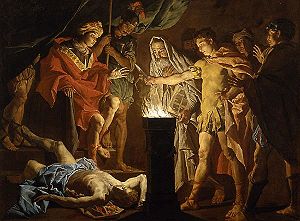 The gens Mucia was an ancient and noble patrician house at Rome. The gens is first mentioned at the earliest period of the Republic, but in later times the family was known primarily by its plebeian branches.[1]

Origin of the gens

The first of the Mucii to appear in history is Gaius Mucius Scaevola, a young man at the inception of the Roman Republic. According to legend, he volunteered to infiltrate the camp of Lars Porsena, the king of Clusium, who besieged Rome circa 508 BC, and who may in fact have captured and held the city for some time. Mucius, armed with a dagger, attempted to assassinate Porsena, but unfamiliar with Etruscan dress, he mistook the king's secretary for the king, and was captured.

Brought before the king, Mucius declared that he was but one of three hundred Roman men who had sworn to carry out this mission, or die in the attempt. As a show of bravery, it was said that he thrust his right hand into a brazier, and stood silently as it burned. Porsena was so impressed by his courage and endurance that Mucius was freed, and some traditions held that Porsena withdrew his army in fear of the threat of assassination invented by the young Roman.[2]

Praenomina used by the gens

The chief praenomina used by the Mucii were Publius, Quintus, and Gaius, all of which were very common throughout Roman history.[3]

Branches and cognomina of the gens

The only major family of the Mucii bore the cognomen Scaevola. This surname is said to have been acquired by Gaius Mucius, who lost the use of his right hand following his attempt on the life of Lars Porsena, and was subsequently called Scaevola because only his left hand remained. Scaeva refers to the left, and occurs in other gentes, including the Junii. It seems possible that Scaevola arose as a diminutive of Scaeva, but in ordinary usage, scaevola referred to an amulet.

The only other important cognomen of the Mucii was Cordus, borne by some of the Scaevolae. According to some traditions, Gaius Mucius was originally surnamed Cordus, and assumed the surname Scaevola on account of his deed before Porsena. However, it may be that the tradition concerning his right hand was a later addition to the story, intended to explain the descent of the Mucii Scaevolae from one of the heroes of the Republic. Although Gaius Mucius was a patrician, the later Mucii Scaevolae were plebeians.[4][5]

Members of the gens

This list includes abbreviated praenomina. For an explanation of this practice, see filiation.

This article incorporates text from the public domain Dictionary of Greek and Roman Biography and Mythology by William Smith (1870).